[VoxSpace Life] Manipulation By Hate: The What And How Of Hate Politics In India 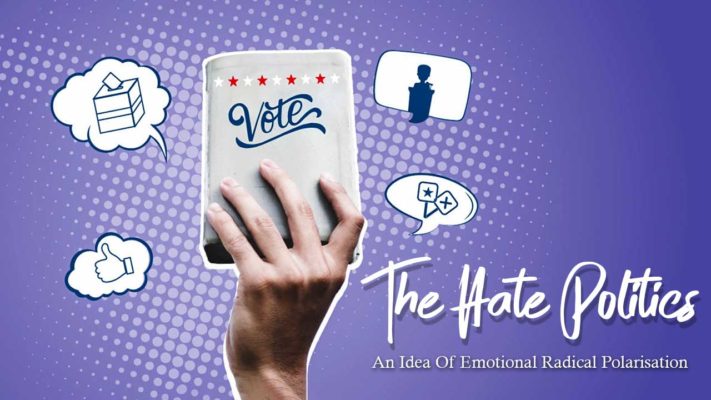 “Vote Out Hate Politics”, Says The Artistic Intelligence Of The Country

In the last month, the country witnessed 103 Indian filmmakers forming a group in unity to sincerely appeal to the citizens to “defeat fascism” and drive out BJP from the seat of power in the upcoming general elections of 2019. The group included eminent members of the Indie film community like Devashish Makhija, Sanal Kumar Sasidharan and Anand Patwardhan. Not letting this initiative to stop, recently, over 200 prominent writers of the country have stepped in together for an appeal to the country’s citizens to “vote out hate politics”. The list includes Amitav Ghosh, Arundhati Roy, Girish Karnad, Romila Thapar, Anita Nair, Basharat Peer, Joy Matthew, AJ Thomas, Kunal Basu, J Devika and Nayantara Sahgal

The statement begins as, “Hate politics have been used to divide the country; create fear; and exclude more and more people from living a full-fledged life. Writers, artists, filmmakers, musicians and other cultural practitioners have been hounded, intimidated, and censored. Anyone who questions the powers-that-be is in danger of being harassed or arrested on false and ridiculous charges.” It further says, “In the last few years, we have seen citizens being lynched or assaulted or discriminated against because of their community, caste, gender, or the region they come from.”

The statement also focuses on the desperate need for a change in power as it mentions, “All of us want this to change. We don’t want rationalists, writers and activists to be hounded or assassinated.” Highlighting the issue of marginalizing the minority groups along with the Adivasis and the Dalits in particular, the statement reads, “We want to safeguard our diversity and let democracy flourish.”

Finally, the statement concludes without pointing its finger at any particular competing party in the upcoming elections, “The first step, the one we can take soon, is to vote out hate politics. Vote out the division of our people; vote out inequality; vote against violence, intimidation and censorship. This is the only way we can vote for an India that renews the promises made by our Constitution.”

Connecting Hate And Politics In India

It has been more than decades since Indian polity has been experiencing a historically significant and unparalleled change owing to the overpowering ascend of the extreme right Hindu political parties such as the Shiv Sena, RSS, and BJP who alternatively like to be called the “Hindutva” parties. These parties have been trying, and to some extent, succeeding in dominating crucial spheres like administration, judiciary, educational institutions and culture.

The question that comes up is if there is actually a diametrically opposed conflict between the extreme right Hindu parties in taking charge of the state and the liberal democratic bodies. What is to be taken note of, is that ever since the Bharatiya Janata Party (BJP) has come into power, the country has been witnessing a sharp ascend in sectarian violence and hatred against the Muslims.

Riots, Looting, Lynching And What Not

Furthermore, there had been reports of riots that had occurred in the western and northern regions of India. A huge number of Muslim lives had been lost while the police had found themselves in the face of rampant criticism. Eminent Jurist B.N. Srikrishna, who was in charge of the Enquiry Report on the Bombay Riots of 1992, had charged the Shiv Sena party’s former leader, Bal Thackeray, with the offense of provoking riots. The Enquiry Report Commission had also accused the police of engaging in the acts of looting and violence against the Muslims.

However, those who were held responsible and guilty by the Enquiry Report for violence against the Muslim community and the destruction of property had been let off without any punishment. In fact, they are even enjoying the power seat in the present day. It is shocking that sectarian violence of this stature would be eternally ingrained in the history of India in spite of it being a country harboring about a tenth of the total population of Muslims around the world, making it one of the prime Muslim countries after Pakistan and Indonesia.

The Rise Of The Hindu Nationalism

In retrospect, the pulling down of the Babri Masjid in 1992 was a well thought and strategized step for it had led to immense electoral dividends for the extreme right Hindu parties, especially the BJP along with its allies. Mobilization by Hindu extremist parties is acted out in accordance with religious identities. This is the main force driving the politics of India towards what can be called “Hindu nationalism”. As a result, there is a rise in the subordination and subjugation of the minority communities.

The semi-fascist groups have attained authority by arguing that the Hindus have been subjected to discriminatory treatment. This, of course, is a barefaced lie owing to the fact that the Hindus, post-independence, have always enjoyed most of the power in the cultural, political and economic domains. These Hindu extremist groups are altering the educational textbooks and syllabus attempting to integrate perspectives of history according to the religious texts and mythology as they identify it.

In order to be able to do this, partisans of Hindutva are being offered the highest positions in the nation’s major cultural and educational bodies for upholding extremist ideologies of Hindu nationalism. In fact, if this were how things continue to be, India would cease to be a secular nation and would very soon be restructured as Hindu nation.

Obsession Over Establishing A ‘Hindu Rashtra’

It must be brought to notice that the BJP government in India is operated by the Rashtriya Swayamsevak Sangh (RSS) that provides not just the money and cadres but also accounts for the muscle power during the elections. The officials of the RSS even function as the BJP secretaries. The major agenda of the BJP and the RSS is the establishment of a “Hindu Rashtra” destabilizing the secular nature of the nation. The basis of the Hindutva movement is to strategically instill in the mind of the people the fear of the “other”, especially the Muslims and other minorities.

Consequently, ever since the Modi government has come to power, there have been rising reports of murderous crimes against the Muslims. To state an example in point, given that cow slaughter has been banned across most of the states in the country, since Modi has formed his government, the Hindutva activists have used the beef ban multiple times to rationalize their public violence against guiltless Muslims.

A recent report stated that since 2015, India has recorded the murders of 34 people, most of whom were Muslims, in the attacks of cow vigilantes. It also mentioned that such attacks were nothing but the provocative result of hate propaganda and violence. In 2017, a report, ‘Lynching Without End’ read, “The shift in method, from mass violence to low-intensity individualized ones, being perhaps a deliberate strategy by those behind the violence, to at once avoid too much public scrutiny, whilst also ensuring that the minorities [Muslims] are constantly under attack.”

A similar report by the organization, IndiaSpend, stated, “Muslims were the target of 51% of violence centered on bovine issues over nearly eight years (2010 to 2017) – and they comprised 84% of 25 Indians killed in 60 incidents. As many as 97% of these attacks were reported after Narendra Modi’s government came to power in May 2014.” The democratic principles and pluralistic values of India are facing a threat. The extreme right Hindu parties aim at reshaping the country into a Hindu nation that goes against its constitutional commitment of supporting multiple faiths.

Promoting Hate Action At Its Best

Activist Harsh Mander is of the opinion that India is being devoured by “a growing climate of hate.” He says, “We have a political leadership now in the country that has created an environment which is permissive of acting out hate speeches and hate actions. Lynching of this kind is a growing phenomenon in many parts of the country.” The current Indian government is not just any other political organization supporting right-wing ideologies like the Conservative Party of the United Kingdom or the Republican Party of the United States of America.

Instead, it is nothing but a mass political facade for the semi-fascist RSS organization, that defines itself as a “non-political” and “cultural” organization, when it has revealed its sole objective to change the social, cultural and political life of India. It is an organization who refuses to step out of the nostalgia of a “Hindu Golden Age” and in that delusion fails to acknowledge all forms of violence against women, caste suppression and marginalization of the minorities, especially the Dalits.