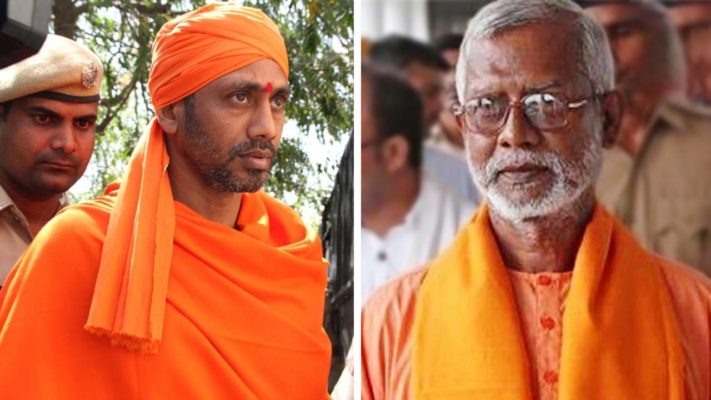 Ajmer Dargah blast happened in 2007, and three people were killed in that blast. The convicted individuals, in this case, were welcomed as heroes by a large crowd, which included the associated members of RSS, VHP, and BJP, after they released on bail granted by the Rajasthan High Court. Bhavesh Patel, who is one of the convicts of this blast case, as he reached in his hometown Bharuch from Ajmer, members from the different right-wing outfits including the BJP, ruling Bharuch Municipality, with the common masses provided him with an enthusiastic welcome.

According to the Indian Express, the lawyer of the two convicts in the Ajmer dargah blast case, Devendra Gupta and Bhavesh Patel, said that they had been convicted on ‘human probability, conjectures, evidence, circumstantial,’ basis. Patel stated that “one thing is clear, that despite disturbance, the truth remains the truth. It comes out subsequently,” and furthermore Patel prefers to be addressed as Swami Muktananda.

Hundreds of people along with the VHP, BJP, RSS members welcomed the convict of Ajmer Blast and walked towards his place, after that he went for the prayer. Spokesperson of VHP Gujarat unit, Viral Desai claimed that ‘Patel has remained connected with the VHP and the RSS (Rashtriya Swayamsevak Sangh) since his younger years.

Long back, he had also functioned as an office bearer of the Bharuch unit of RSS. Last year in the month of March 2017, a trial court had penalised Patel and his co-accused associate, Devindra Gupta to Life imprisonment in the case of Ajmer Dargah blast. Ajmer Dargah blast occurred during the time of Roza on October 11, 2007, three pilgrims had died and 15 were injured.

Many people stood in his way when he was returning from the temple. When he started to walk towards his home, people showered garlands and yelled slogans in his support. Many relatives of Patel, who were dressed in saffron turbans and robes, were also involved in the welcome ceremony.

People present there were questioned by some of the reporters, according to the Indian Express, a lady was asked by the reporter about her presence in the crowd, Tamukawala said that she received a WhatsApp message and therefore she went there.

The Appalling Behaviour Of The Masses

Nishant Varma, a social activist, said, any welcome reception from any political party to a convict should be ‘unacceptable’ and it should be call as ‘anti-national’. He said that the convicted person either comes out on bail or after completing his/her punishment cannot be given a welcome as a hero.

This incident is appalling and forces us to think about the route this country is taking. A society in which criminals are welcomed as heroes of war brings forward the inherent hate and xenophobia present in the minds of the masses.

In the recent times, we have seen the convicts of rape, mob lynching and other heinous crimes have been repeatedly celebrated by both the masses and the current government. Very recently the convicts of Jharkhand Mob lynching were garlanded by the Union Minister Jayant Sinha. Such acts provide impunity and courage to these criminals.

We should collectively introspect about who we celebrate and who we diss, criminals [convicted ones] definitely do not qualify for the former.