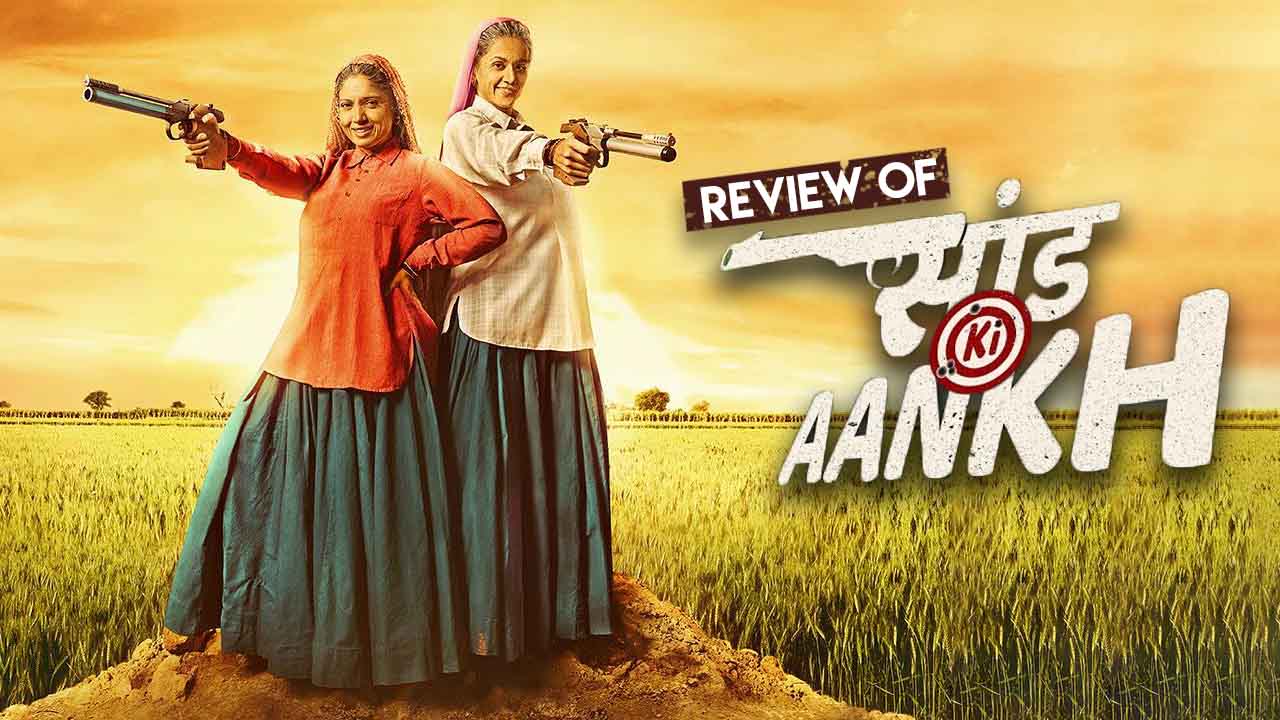 Saand Ki Aankh is a film about the various struggles that the famous sharpshooters’ duo – Tomar Sisters (or famously referred to as Shooter Dadis) went through before they could enjoy the success. The film directed by Tushar Hiranandani, who is making his directorial debut with this movie, is a good overall entertaining package. The real reward is the unheard and incredibly inspiring story of Chandro Tomar and Prakashi Tomar, whose story will make you realize that nothing is impossible. I genuinely felt motivated after knowing about them and that’s because the makers do a good job in keeping the story as authentic as possible. Let’s delve deep into the story and understand what makes this film special and a must-watch.

A Story Of Breaking The Stereotypes And Egos

The story begins with Tomar family which consists of so many people that it is a mini-village within itself. They live in the Johri Village of Baghpat district in Uttar Pradesh. The head of the family, Rattan Singh Tomar (played by Prakash Jha) is the decision-maker of the family and everyone in the family is bound to act as per his command. Rattan Singh is the epitome of Patriarchy and male chauvinism and has a strong philosophy of what a woman should be limited to. Rattan’s wife and the wives of his two brothers that is Chandro Tomar (played by Bhumi Pednekar) and Prakashi Tomar (played by Taapsee Pannu) are restricted to just cooking, tending to cattle and giving birth to children.

But after being suppressed, humiliated and disrespected by the men of the house for many years, Chandro Tomar and Prakashi Tomar who have more than a dozen grandchildren now, decide that they don’t want the girls of this family to go through what they’ve been to. That’s when they come across Dr. Yashpal (played by Vineet Kumar Singh) who starts a shooting range in the village. Both Chandro and Prakashi want their granddaughter Shefali Tomar (played by Sara Arjun) and daughter Seema Tomar (played by Pritha Bakshi) to learn shooting and then get a job. But when both Shefali and Seema are hesitant to shoot, Chandro and Prakashi pick up the gun and hit the bullseye, literally. That’s when the coach Dr. Yashpal asks them to continue shooting and they start doing it and eventually liking it.

And from then both Chandro and Prakashi go to different tournaments where they are humiliated and insulted initially which in turn drives them to win the competitions. That’s where their journey begins, where they somehow practice and attend tournaments secretly with men of the house never getting a whiff of their pursuits.

Although the story is based on real events, a biography nevertheless; the writers of the film, Balwinder Singh Janjua, Jagdeep Sidhu and Sanjay Masoom, smartly build the narrative while infusing it with plenty of raw humour. The story starts at a point in the present time and then we see the flashbacks of the life of Chandro and Prakashi Tomar in an extended montage of sorts. There’s a voice-over by Shefali Tomar who gives us insights and a commentary of what’s panning out. The screenplay is pacy and keeps you hooked all the time.

The humour is pretty fresh and very organic. For example, there’s a scene, where the villagers come together and watch the screening of Mother India (1957) starring the legendary Nargis Dutt and Sunil Dutt. And right after the movie ends, there’s a Public awareness video about condoms. The whole scene is played out in a comic tone. What this scene does is though, is that it serves the comic relief and at the same time, it shows the mentality of the people at that time.

In the movie and in real life, the people of this village have a Haryanvi culture and the makers stay true to that by adding some local references which makes it more relatable and real. Apart from that, the makers constantly use the events that occurred during that time and how it affects the Tomar Family. For example – how the state of emergency declared by then Prime Minister Indira Gandhi and the forced mass-sterilization happened during that time had an influence on Tomar family, in particular, the Tomar sisters.

The film has some really powerful scenes and amazing dialogues which guarantee goosebumps moments for the viewers. The treatment of the script is pretty sorted as to the makers know where the movie is headed and what they want to tell, and that in turn makes the audience glued to the film. Another interesting aspect of the film is that the conflicts raised in the movie are very organic and never feel convenient or lazy.

What Stands Out In The Film

The biggest driving force of the film is the performances of Bhumi Pednekar and Taapsee Pannu as the protagonists and Prakash Jha as the antagonist. The kind of screen presence these actors have, it’s like two strong opposing forces colliding and creating an explosion. Bhumi and Taapsee live through the characters and go through the struggles of the Tomar sisters as if they have experienced it personally.

Even the Haryanvi language they speak, they do a commendable job with the dialect and justify the dialogues by adding small details to it. Even the nuances they have with their body language; it is a treat to watch these two amazing actors shine on screen. Prakash Jha is on point with his character portrayal and he creates a fear in the viewers with his strong and dominating character. I was glad to see his character arch at the end and how his arrogance is broken down, slowly and surely.

Another thing that really stood out for me in this film, is the underlying philosophy of progressive feminism, which organically weaves around the integral plot-points. That being said, the film never leaves an opportunity to comment upon the deep-rooted patriarchy and misogynistic philosophies. In addressing these issues, the film through its vocal and awoke protagonists brings simplistic yet highly logical solutions to societal problems.

What Doesn’t Work In The Film

Despite being a good movie, the biggest problem in this film is the way Bhumi and Taapsee look. I mean, despite all the prosthetic work and makeup, they don’t look like 60-year-old women. Other actors who are cast around these two, are 50-60 years old, and these two look odd next to them on many occasions. But if you look past this, you will get to see solid performances from these two outstanding actors. I mean the casting choice does make sense as there are flashbacks scenes that imply their overall character arcs. And both of them justify their inclusion with powerful performances.

One more thing I personally felt is that the makers could have explored a bit of the culture and village lifestyle. They seldom show the impact or repercussion the Tomar sisters have on the people in the village.

But these two are just two slight wrinkles and can be ignored readily to enjoy this incredibly well-made film.

The background music and the songs add a lot to the narrative in this film. Vishal Mishra and Advait Nemlekar do a superb job with the overall music of the film. Most of the songs depict the mood of the characters very well and the background score elevates the scenes on many occasions.

The cinematography by Sudhakar Reddy Yakkanti is very pleasing to watch. Sudhakar does an amazing job of creating shots that are easy to comprehend and understand visual storytelling. The editor Devendra Murdeshwar has some very well cut scenes. I mean the transition between two scenes at some points is very smooth and poetic.

Tushar Hiranandani, who has written many films so far like Masti, ABCD, Main Tera Hero, Ek Villian, Dishoom, etc., makes his directorial debut with this film. He does an amazing job by telling the story in a simple yet effective manner. The narrative of the story goes in a good flow. There are many moments where he sets up the scene very well and the payoffs are very satisfying.

For example (Spoiler Alert), in a scene, Rattan Singh and his men burn down the whole shooting range of Dr. Yashpal. When Dr. Yashpal comes there he is burst into tears and cannot believe what has happened. Then Rattan Singh asks his brother if everything is broken, to which his brother comes to Dr. Yashpal, sees him and says, yes it is now. It’s such a small thing but the kind of impact it has is huge. It clearly conveys the mentality of the characters. And I must say, what an amazing story Tushar chose to make his directorial debut. I think it couldn’t have been better than this.

Vineet Kumar Singh, who is an outstanding actor, does well within the limited screen time he has been offered. He compliments Bhumi and Taapsee very well by allowing both of them to supersede him and take control of the scene. That’s just remarkable from him. Sara Arjun who plays Shefali Tomar and Pritha Bakshi who plays Seema Tomar will leave you impressed with their performances in whatever screen time they have. Most of the other actors do a good job portraying their characters.

Kudos to Anurag Kashyap, who agreed to produce and present this film. If makers like him show faith in such stories, we will have some really good stories and content coming out on a more consistent basis.

And of course big cheers to the Tomar Dadi’s, who picked up shooting at the age of 60, and then went onto, achieve impeccable records. I want to congratulate them on their achievements. Although it may sound impossible, these two strong-headed women have proved that nothing is impossible and age is just a number. As a dialogue says in the movie, “Tann buddha hota hai, Mann budha nahi hota…”, it sums up the journey of these two inspiring figures. A big thank you to these two legends, who fought against all odds and inspired a whole generation of people, especially women.

All in all, I would like to urge you to please go and watch this film. It will make you laugh, cry, cringe and ponder and at the end of the day it will leave you inspired to do more in life. A cleanly made beautiful film which is packaged well with everything in it. Also, do take your parents and family members to this film as they will get to enjoy a well-made family entertainer. Cheers.