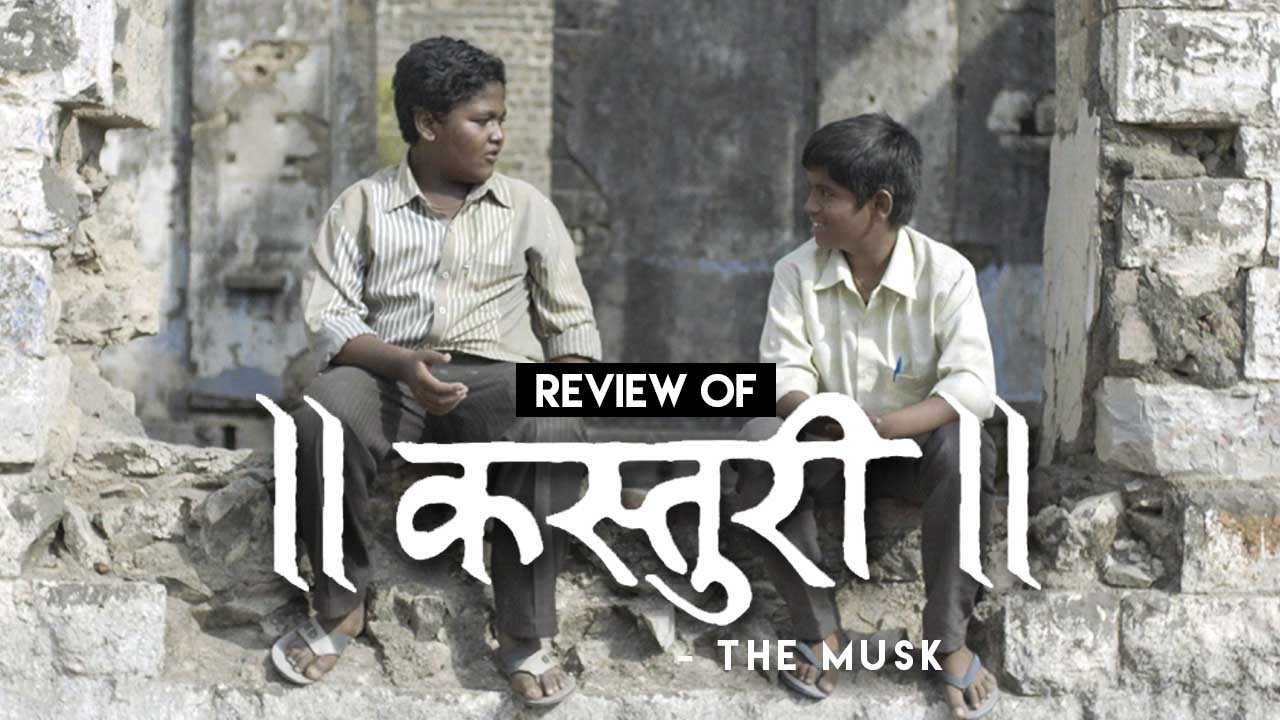 Kastoori – A Passionately Made Personal Saga..

Kastoori is a film that you are bound to get connected with and will somewhere find a part of yourself in. It is one of the most realistic films I have ever watched. There are some films in which you can see that the filmmaker has either experienced what is happening in the film or has done immense research about the subject. With Kastoori, I feel it’s the former one. The emotions which you see and feel in Kastoori are so real that you will feel that this film is a story narrated to you personally by someone you know. Hats off to the writer and director of this film, Vinod Kamble, has made this film with utmost passion and a lot of effort, which is visible in every scene of the film. Let’s delve a little deeper into the film and find out the treasure hidden inside.

A Completely Realistic And Raw Story

The story is about a 14-year-old kid, Gopi (played by Samarth Sonawane), who belongs to a Bhangi (Manual Scavengers) family. Gopi helps his father with post-mortem work at the local hospital and also engages in manual scavenging along with her mom, both of which he doesn’t like. Gopi who somehow balances his education along with the work, wants to stop working and completely concentrate on his studies. But above all this, Gopi wants to smell good and he is constantly seen feeling suffocated by the smell that sticks to him at work which in turn results in constant humiliation by his classmates in school. Hence, Gopi does everything possible, right from taking a bath a couple of times a day, washing his clothes almost every day to applying itthar (perfume) on his clothes very often, to smell good.

One day, he gets to know about Kastoori (Musk) and its ever refreshing fragrance which he thinks would be the best solution to tackle the foul smell. And at the same time, he is informed in the school that he won the first prize in a Sanskrit essay and will be awarded on the occasion of Republic day. Gopi then, along with his close friend Adim (played by Shravan Upalkar), decides to somehow find Kastoori before the Republic day and the rest of the story is about the trails and tribulations they face in the process.

The story is acutely raw and hyper-realistic in terms of how the characters feel and behave. Although, the idea itself sounds captivating on a premise level, there is also a deeper layer to this story, which basically comments about a kid who is tired of being associated or marginalized by the society, and strives to break free out of such categorization, which reflects upon the society we live in. The screenplay of the film by Shivaji Karde and Vinod Kamble is weaved so intricately that on many occasions you’ll feel as if you are in the film and not watching it. The scenes, the characters’ reactions, and most importantly the emotions the characters are going through, are all depicted with incredible amount of texture and detail. Another fascinating thing, is the length of some scenes and the way they were shot. Many scenes are shot in a single take and playout at an extended length which we don’t see often in commercial films. Now, this is an interesting idea because the makers want you to understand what is panning out in the scene, and also observe the different perspectives the various characters have. The makers want to show you the mood of the scene and also give you time to get into the character’s head to find out how differently they perceive the given information. This is also important because the next scene carries the same mood which in turn generates the characters’ behavior and their reaction. This I think is pure genius.

Also while the story progresses forward, we get to see many issues being touched upon in a very subtle manner. For example, in a scene, Gopi, his cousin Mangal (played by Ajay Chavan) and some of Mangal’s friends go to clean the drainage. Mangal who gets inside the manhole to manually clean it suddenly falls unconscious because of strong odour and suffocation and is somehow pulled out. Now, this is a profession which unfortunately is still being carried out by a community and the makers tend to inform us about the health hazards related to it.

Similarly, issues like child labour, casteism, health awareness, corruption, the importance of education, classism, poverty, etc, are shown, are touched upon with careful measure, always veiled under the overall story of Gopi and his quest.

The characters are fleshed out properly and every character makes sense to you. Everyone in the film has their own journey going on and you get to see various parts of it through the eyes of Gopi.

But some characters, in particular, are written very well like Gopi’s mom Aasha (played by Vaishali Kendale) and Gopi’s close friend Adim. At one point in the film, Aasha tells Gopi that pursuing education is futile and instead he should work more towards earning a living. This, we might feel is wrong but once you understand where her thought is coming from, it makes a lot of sense to you. Adim is such an amazingly written character whose friendship with Gopi is in its purest form. It’s very heartwarming to watch the beautiful camaraderie they share between them.

Making The Viewer Think And Not Spoon Feeding..

The nuances and the tiny details added on numerous occasions are amazing. For example, there is a set-up of a glucose bottle and saline put near the entrance of Gopi’s house which is used to water the plants. Some of the details and the references are blink and miss, so you have to pay attention to find and understand them.

Another thing I really liked about the film is that it never tries to explain anything. There is no exposition or anything as such and the makers respect the audience to seek an understanding of their own. During some parts of the film, mainly during the middle part, the story goes on an abstract level, where it is driven by an amalgamation of various philosophies. You might feel that the film is moving at a slow pace here, but if you understand the abstractness and the inherent philosophy, you’ll get to experience an advanced level of film making, particularly, the writing. This is a very important part, as the protagonist is going through many things mentally and the writers want the audience to empathize with that. What a brilliant way to tell something with such great effect. I strongly feel that everyone who will watch this movie will have a different perspective as there is a lot to offer in the film. Teamwork Is The Dream Work

The biggest take away from Kastoori is how great the technical aspects are. First of all, what amazing cinematography by Manoj Sanjay Kakade! The visuals are truly raw and rustic, giving the film a realistic essence. Even the way some scenes are shot, they end up adding a lot of depth to the narrative. As I mentioned earlier, some scenes are on purpose lengthy than usual and are edited incredibly by Shrikant Chaoudhari. Even the transition between the scenes on some occasions leaves you in awe. Special mention to the costume designer Shivaji Karde, Hair and makeup artist Suresh Kumbhar and art director Atul Lokhande. The way they pull off the set design, the characters looks, and costumes is surreal, as they look straight out of reality. All these factors when synced together make the film look authentic and true.

Another great aspect of the film is its soundtrack. Since the movie has a lot of emotions at its core, it was important to match that intensity. And Jaibhim Shinde does a superb job with the background score of this film. The music uplifts the mood of the scene and elevates your experience and understanding. The biggest aspect though is acting. Every actor in this film is amazing. Samarth Somane is so good that throughout the film you believe that Gopi is a real person. Samarth makes us forget that he is acting and makes us believe that he is actually going through what is happening in the film. And at the same time, Shravan Upalkar tags along very well as Adim and lends importance to the chemistry between Gopi and Adim. These two talents are something we have to nurture carefully for the future. For example, in a scene, Gopi has to get a stone and give it to his father. The way Samarth picks the stone and slouches while carrying it and showing the pain on his face is such a detailed nuance that he adds. What a great understanding of the art at this small age. The rest of the supporting actors do a great job of making their characters real and lively.

The hero of this film, Vinod Kamble who has written a great story as it were, also does an incredible job of telling it captivatingly. His work as a director on many occasions leaves you awestruck and wanting to believe in his craft. He makes you comfortable enough for you to sit and experience a great and important story. He will take you on a journey, question you, test you and leave you to ponder after the film about what just happened. All in all, Kastoori (The Musk) is an incredibly well-made film which is very important for us to understand many things. The film will make your perspective change and will raise a new thought in you. Honestly, I don’t think I can do any justice in telling you how good this film is. I have just tried to share my experience of this film. But the fact that this amazing work was one of the films to feature in India’s biggest film festival, Jio Mami 2019 (Mumbai Film Festival), last month is proof of the greatness of the quality of this film. So, please watch this film which is a treasure and a novelty art you cannot afford missing. Kudos to the makers. I hope people watch this film and get encouraged to make many more good films. Cheers.