Posted on October 19, 2019 by Srividya Vanamamalai 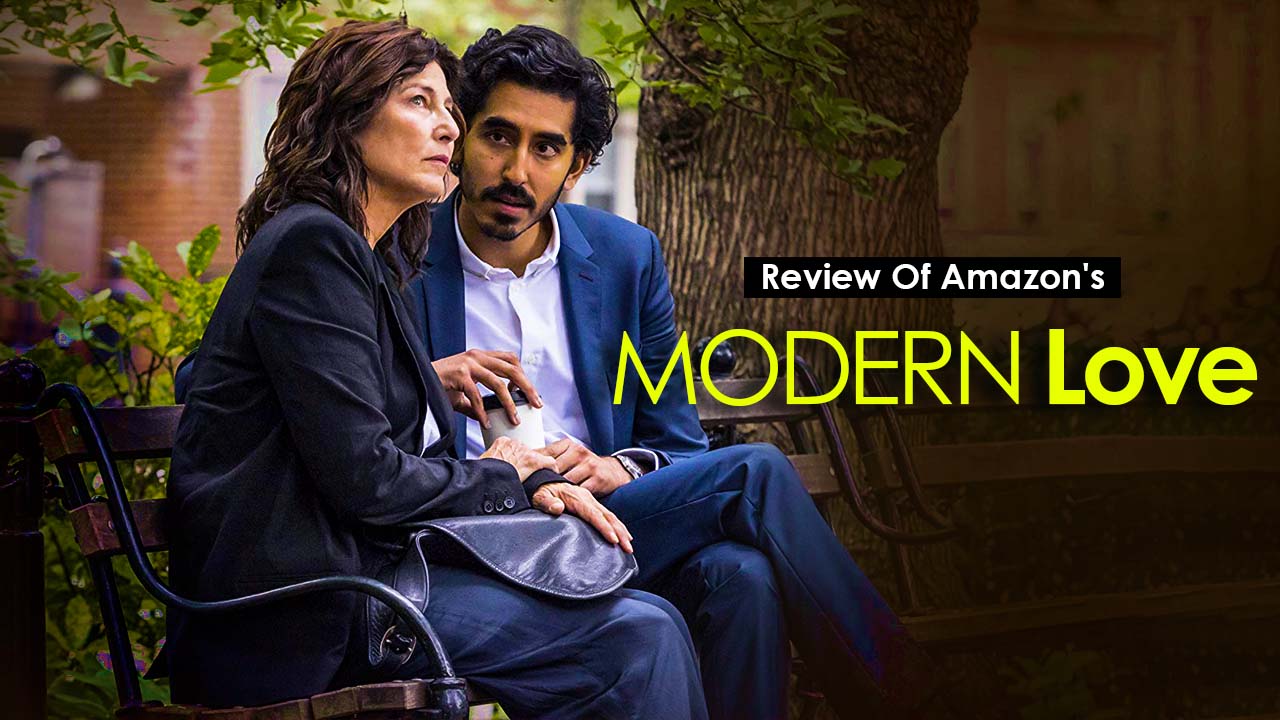 Based on the New York Times’ column, Modern Love, an anthology romantic series produced by Amazon Studios is a glamorous affair you do not want to revisit. The column is a New Yorker’s story of love and relationships written by readers of the New York Times, and is also a weekly podcast. Having been a fan of the podcast, it was truly heart-breaking to witness such real stories reduced to thin thread of storylines. Modern Love, is not so modern as it claims to be. It is imbued with “modern societal values” such as racial equality, homosexual relationships and mental health awareness on a very superficial level. Most of the “non-stereotypical” characters have a namesake value with considerably low credibility and caricature outlook. With a total of 8 episodes, each having a unique (if you can call it that) notion of love, giving it different forms and meanings, only one or maybe two of them stand out.

Undoubtedly, the stellar casting and lavish New York apartments engage your eyes, their “emotional” stories somehow did not garner my full attention. I thought I’d do an episodic break down to weigh the likes and dislikes I felt while binge-watching this show as a weekend-starter.

(Spoilers ahead, not really a risk, just a heads-up)

Episode 1 : When the Doorman Is Your Main Man

Starring Cristin Milioti and Laurentiu Possa as Maggie and Guzmin, it is an interesting tale of love, faith and trust between a Doorman and a young independent woman living in a plush New York apartment, and serves as a well-balanced appetizer to start off the series. It manages to hit the perfect pace but the characters aren’t too fleshed out, especially Guzmin, the doorman. It is a cute guide-mentee relationship that seems unlikely and a little over-the-top if you raise those flags of reality checks in your head. I listened to this podcast episode again, and really wished the writers had decided to stick to the real source instead of fictionalizing it and just maybe, maybe made it 45 minutes long to establish the characters as well as the series and create a stronger foundation.

“My doorman. Guzmin was my doorman and ours was a common and unsung friendship…  acting as gatekeepers, bodyguards, confidantes and father-figures.”

Episode 2: When Cupid Is A Prying Journalist

Yes, Dev Patel is that love-sick techie guy you feel for and connect with, when he shares his love story “off the record” to an equally romantic compassionate journalist, Catherine Keener. They play Joshua and Julie in this platonic love story which almost seems true and does not bore you. It neatly balances the two different love stories that changed their lives forever and the performances are convincing and extremely exaggerated but there are not many takeaways as well. You relate to the characters and wish for that happily ever after, and the episode satisfied the realist, yet romantic in me. It does have its dull moments but you are willing to listen to these two characters’ life-changing narratives.

“Because real love, once blossomed, never disappears. It may get lost with a piece of paper, or transform into art, books or children, or trigger another couple’s union while failing to cement your own. But it’s always there, lying in wait for a ray of sun, pushing through thawing soil, insisting upon its rightful existence in our hearts and on earth.”

Episode 3: Take Me As I Am, Whoever I Am

On paper, I think this would have been the most eccentric and promising episode of all but falls short of expectations miserably. Anne Hathaway, portrays a bipolar New Yorker woman, Lexi who works in an entertainment law company and tries to go on a date with an African-American man (yes, modern nuances like these pops up superficially) and somehow, screws up multiple times. It comes off as a phoney and inorganic narrative that you just fail to connect with it, despite the effortless acting by Anne Hathaway. It tries to end on a humane, mental health awareness note but just doesn’t fall in place.

“Without medication, I’m at the mercy of my own spectacular mood swings-up for days, charming, talkative, effusive, funny and productive but never sleeping and ultimately, hard to be around. In love, there is no hiding, you have to let someone know who you are.”

This is my favourite. Period. This is the only story of love that I thoroughly laughed and loved. Starring Tina Fey and John Slattery, it was truly a delight watching this humorous story of a middle-aged couple, Sarah and Dennis, trying to keep their marriage alive. Their constant argumentative selves separate them to a point and just when they decide to give up, they find the fairy tale ending. When I watched Tina Fey pouring her heart out, I almost cried. The hilarious take on love and life is what keeps this story believable, real and entertaining.

“People don’t change who they are, only how they play and work with others. Our basic problem was and is we are almost identical- in looks, attitudes and psychological makeup. We didn’t bicker often but when we fought, we raged.”

Episode 5: At the Hospital, An Interlude Of Clarity

One of the most boring, lethargically written episodes, packed with poor performances and a dry plot. You hardly feel sympathetic for any of these characters and it felt like a never-ending Monday. It did not check any of the boxes to even prelude an entertaining love story. I feel pangs of regret brewing in my head.

“There is never a good time to fall off your couch onto a martini glass and begin losing a dangerous amount of blood, but having this happen in the middle of a promising date is an especially bad time.”

Episode 6: So, He Looked Like Dad. It Was Just Dinner, Right?

It is a sensitive, delicate sort of love you seek, that of a dad figure if you don’t have one. Try and watch this episode with an open mind and do not be hopeful of it making an impression. Somehow, it does not feel real and makes you feel cringy and awkward at different moments despite trying your best to overcome the conservative mindset imbibed in us, but it all ends being for nothing. Literally nothing, as the episode takes a boring turn and leaves you uninterested throughout.

“He was very handsome. He wore grey turtleneck sweaters and smelled like mint aftershave and old books. He was 55 and recently divorced for the second time. He was my father. He wasn’t really my father.”

Episode 7: Hers Was A World of One

There is a constant use of TV or cinema or Animals, in fact used to convey the emotion and thoughts of a scene and sometimes, there is an amazing interplay of unspoken words which leads to these characters’ life decisions. A gay couple decide to adopt a child after watching a family of chimpanzees on TV. Andrew Scott, Brandon Kyle Good man stand out in this one as they try and keep it real and heart-warming at the same time. Olivia Cooke who plays the hippie Karla, is entertaining in her own unconventional manner, with Ed Sheeran popping up literally like an uninvited guest. This story lacks texture and a substance of its own but can be overlooked as it is breezier when compared to its boring predecessors (Ep. 5 and 6).

“There was no guarantee that doing an open adoption would get us a baby any faster… in fact, our agency warned us that, as a gay male couple, we might be in for a long wait.”

Episode 8: The Race Grows Sweeter Near Its Final Lap

It was a sweet way of ending the show by introducing an old couple who find love in a marathon run. It was over simplified and short, so there was hardly any time to understand the characters. It looked hurried in a way because they were trying to accommodate the beginnings or the endings to the other 7 stories in this anthology series.

“Old love is different. In our 70s and 80s, we had been through enough of life’s ups and downs to know who we were, and we had learned to compromise. The finish line was drawing closer.”

Modern Love, is a cheesy love letter to New York with A-listed actors playing luxurious New-Yorkers dealing with first-world problems in plush looking apartments and glamorous costumes and flawless makeup. Despite having great source material, the writers fail to make the most of it and the show ends up relying way too much on its performances. Instead of spending on lavish sets and renting out New York apartments, maybe they could’ve paid more attention and detail to the untapped potential the original story-lines had.