[VoxSpace Selects] Review Of Pain and Glory : A Celluloid Treat For The Fans Of The Master Filmmaker 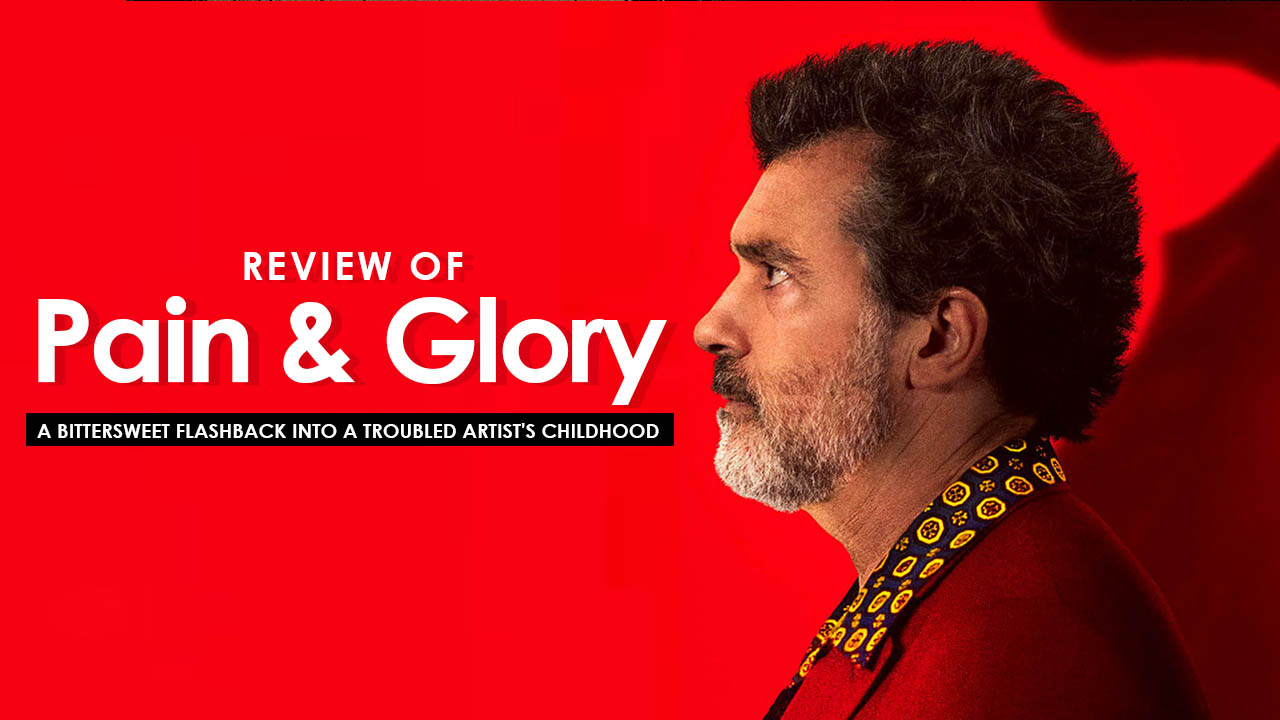 There is a line around halfway through the film, uttered by a man doing a monologue on stage that is not written by him. He says, “Love may move mountains, but it is not enough to save the one you love”. This line perfectly captures the essence of this semi-autobiographical mood piece from a master working at the peak of his craft. The film absolutely captivates you with its visual beauty, while it fearlessly touches Almodóvar’s most prevalent themes like desire, passion, family, and identity. I think I am getting ahead of myself here. Let me begin where the film begins.

A Man At The Brink Of A Meltdown

As the film opens, we see Antonio Banderas’ character (Salvador Mallo)- who we later learn is a filmmaker- floating in the water, forcing himself to hold his breath. As we move closer to him, we tap into a memory of his childhood, where his mom and a few of her friends are singing a folk song. As the movie goes along, we learn that he is extremely unhappy, and creatively blocked. Over the next few days in his life, we jump in and out of his memories learning more about his past, including his first sexual awakening, a love that could have been, his unfulfilled relationship with his mother, a deeply wounded friendship and a serious health ailment. All these elements lead up to a superbly staged last scene that is as emotionally rewarding as it is devasting, all at the same time.

Not A Typical Almodóvar Film

This is not a very typical Almodóvar film; it is a lot more subdued and melancholic than his usual films. While it does touch on similar themes, it feels a lot more tangible due to the various similarities to his own life. The last time I felt this way watching one of his films was when I watched Bad Education, which again had a lot of autobiographical elements. The bright colors are all there, the irreverent humor is still there, the profound but natural dialogue is still there, but they are just slightly toned down. Due to this, it does not have the immediate effect that his films most of the time have. It’s only after you have left the screen and have the time to piece it all together that you get the punch in the gut that was intended.

Antonio Banderas Gives The Performance Of A Life-time

Almodóvar goes back to his most trusted and frequent collaborators, Antonio Banderas and Penelope Cruz to essay the characters that most probably are very to him. Penelope Cruz plays the mother in the film with a kind of divine grace and maternal poise, that it gave a glimpse of how the filmmaker remembers her to be. While her character is never happy with her circumstances, you can always see a certain amount of responsible determination to take care of her son. The rest of the cast really fit their roles perfectly, including the once reckless but now reformed boyfriend, the heroin addict actor friend, the little kid with inquisitive eyes who plays young Salvador, etc. But the stand out here is obviously, Antonio Banderas. I have never seen him play a character with so much depth and such a lack of vanity. Not for a second do you question a single choice he makes. He so fully gives into his character that I could not separate him from Salvador, even once In walked out.

Obviously, as it is an Almodovar film, it looks marvelous. The world looks very lived and well thought out. The production design not only brings the world alive but adds an extra level of subtext that is needed for a story like this. The cinematography and camera movement are very floaty and light to give a dream-like feeling, which is enhanced by the seamless editing. The form perfectly fits the narrative the same way that last year’s Roma did.

On the whole, Pain and Glory is a thoughtful recreation of a feeling and a time in the form of celluloid that helps us understand the man behind the camera in a more meaningful way. I would say the film is a lot more rewarding if you know about the master behind the camera. Please do keep a lookout for the sensual dreamlike visual masterpiece that is unlike any other film this year.