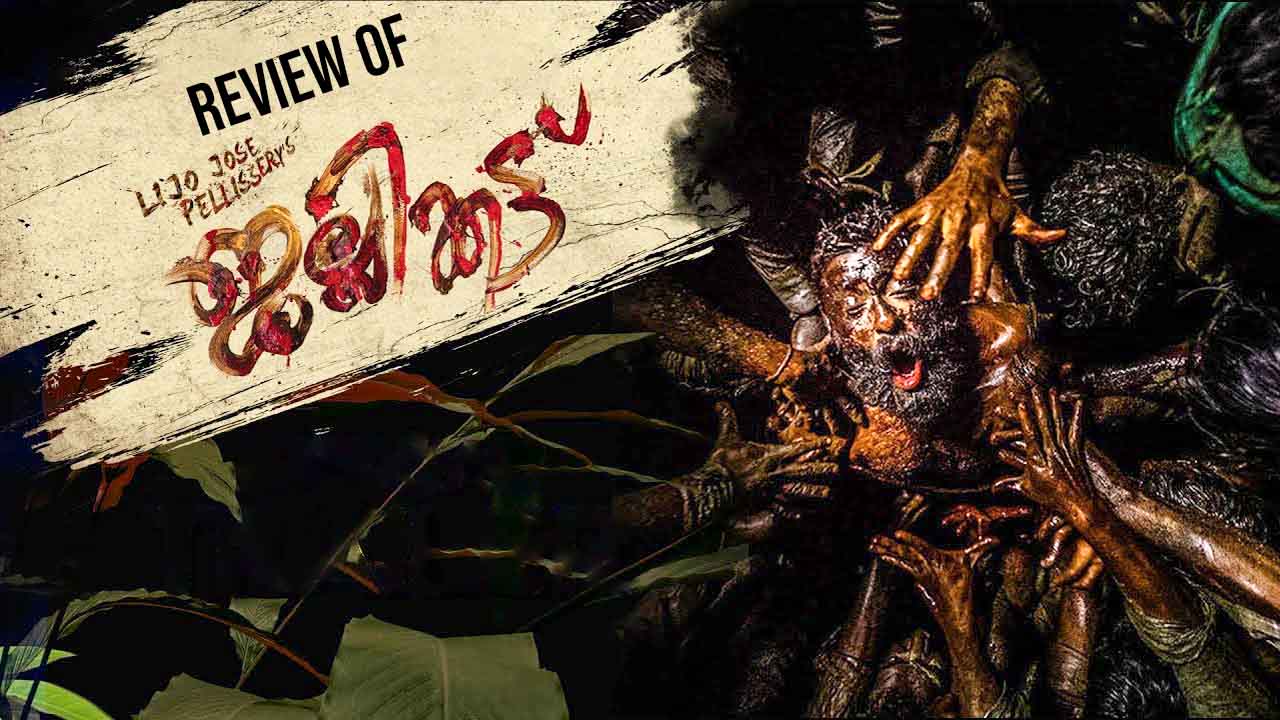 Jallikattu – An Ode To Nature And Its Brimming Absurdity

Jallikattu, the movie about humanity and its inflictions upon wilderness around it, starts with what is expected out of it. As we zoom in on a lush green hill-locked hamlet cradled inside the scenic womb of Kerala, the purple twilight slowly breaks out into an orang-ish hue of the morning. In inventively edited quick montages, we get a glimpse of the characters which breathe life into the sullen and sleepy village. Among all these montages, the screenplay lingers a little longer upon a butcher, Varkey (played by Chemban Vinod Jose) who provides beef to the entire village (a business handed over to him by his father), his sister Sophie ( Santhy Balachandran) who the village’s nightie clad gossiping women claim to be a beauty to behold, and the butcher’s assistant, Anthony (played by Antony Varghese) who makes it his business of life to charm the Butcher’s sister by hook or crook. Whilst exploring this village, we also see an ailing man on his deathbed who is taken care by his son, a police officer with his domestic life thrown into turmoil, a pastor who accepts specially cut beef offerings with a shy wink and skewed sanctity. All these characters, as we are brilliantly shown, are connected by their collective craving of beef, and thus Varkey and his vocation, becomes a centrifugal point for all their conversations and airy challenges.

The daily routine of Varkey, the Butcher, is to receive a transported buffalo in the wee hours of the morning at a make-do straw shed, at the edge of the forest, and butcher it for the day’s consumption. One fine day, one of these ill-fated beasts, decides to challenge its destiny, and well, escapes. It runs amok across the forest, injuring the Butcher and his thickly egoistic assistant, and goes missing. Thus, the sullen sleepy village is overnight thrown into utter chaos. The village realizes the threat this wild beast poses, when the buffalo stomps and runs through carefully fenced spice plantations, crashes out church held gardens, and wreaks havoc in the village’s bank. This sudden turn of events spreads a panic wave across the villagers who deal with the issue in their own manner.

As the story progresses, Jallikattu expertly swirls its “man vs wild” premise to “man is wild” preposition. The wild buffalo hunt becomes a reflective mirror for its characters to confront their past, present and future. The courage pinned villagers take it upon themselves to bring peace back to the village as the confusing day turns to a divisive night. The horrors of humanity become the central point of contention, as it becomes derivatively clear that the men in the village are not in fact chasing an animal as much as they are their own insecurities and redemptions. The movie ends with kinetically thrilling visual imagery which will leave the viewers haunted by it.

Perhaps, the most striking feature of Jallikattu is its use of its storytelling tools to peddle the complexity of the philosophy inherent to the tale. Right from the first wailing acapalla vocals to the split-second edits and the macros framed sanctuary captures, it becomes clear that the film has its vision clear for what’s in store. Then comes the elements of the fear of unknown. The camerawork by the ever reliable,
Gireesh Gangadharan, is luxuriously handled across the landscape, sometimes meditatively going into a calm slumber and at other times dashing through the wilderness as the impending threat becomes clearer, and all the while demanding your intrigue for its dexterity.

Within the third act, where all the fears converge to become a unison of demonic prepositions, the camera slithers into the sweaty bodies and palpable sensitivities, grappling the viewer to disturbing physical closeness that you can almost feel the raging precipitations of misplaced egos. To add to that, the sound design which starts at ritualistic comforts pulling you in, to interact with these broadly etched characters, gradually slips into anxious eeriness which makes you uncomfortable in an effective and targeted way.

The film reminds one of the sheer inherent talent of the maker,  Lijo Jose Pellissery, echoing off of his acclaimed work in movies like ‘Angamaly Dairies‘ and ‘Ee. Ma. Yau‘. In Jallikattu, the maker, now evolved into a vibrant stature, leaves no stone unturned to imagine and excite various possibilities of human nature. The movie itself an adaptation of a short story by writers R. Jayakumar & Hareesh S., has been tweaked to suit the vision of the maker, and for the most part it works. Having said that, it seems that the vision of the maker was not always inclusive of the various promising strands, because at times the story and characters take a back seat as the proceedings unfold.

Jallikattu as the story begins, prompts one to dive down and fish out the philosophical anecdotes at play. And there are quite a handful to be found here. Although not thick-skinned or profound, an underlying statement about migration, class divide, directionless guidances, socio-political upheavals, and skull cracking patriarchy can be read through the magnifying glass. The overall premise of who is the beast in actual sense, is the overall philosophy of the movie, and that deprives it of the nuanced layering you come to expect out of such confrontational movies like Spielberg’s Jaws, Na Hong-jin’s Wailing or Darren Aronofsky’s Mother. It seems that sticking to just one theme is a thin ice on which the movie is skating without wobbling for the most part. The promise of the premise to explore the depths of humanity although remains delivered, it fails to be entirely fulfilling.

However, there is guiltily much to be enjoyed about this movie, which has achieved what no other movie has in the recent past in terms of its technical brilliance and thematic exploration. Jallikattu thus becomes an important and an all together essential viewing for anyone who loves vividly evocative movies. Jallikattu becomes the film which pushes the envelop so far and so hard, that the table now has to be refurbished to accommodate its brilliance.