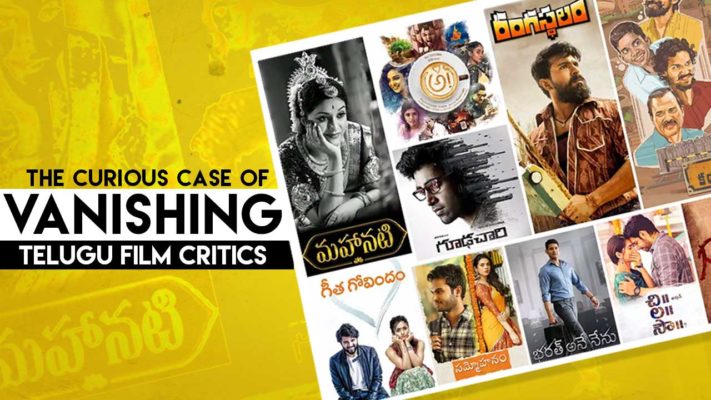 The Curious Case Of The Invisible Telugu Critics

India is the largest movie producing country in the world, releasing more than 1000 films a year. With movies like PK, Baahubali and Dangal, the audience for Indian films is increasing at a good pace globally. So, you see, there are many people watching our cinema. With Bollywood contributing to the major chunk of movies and business, Telugu Film Industry holds the third place after the Tamil Film Industry in terms of the number of movies and business. And presently it is on the verge of overtaking to the second place.

Another fact to mention before we step further is, Andhra Pradesh and Telangana hold the highest number of screens across the country with 2,800 plus screens. The Telugu Film Industry and its movies are literally worshipped. People wait every weekend to catch a good movie. The Telugu Cinema is also going through a much-needed change in making and perceiving cinema. The wave of new-age Telugu Cinema has hit and it’s heart-warming to see this happening. While everything looks good, one factor that’s really disappointing is the film critiquing in Telugu Cinema. It is sad to see that a flourishing industry like this has no proper face when it comes to film critiquing.

Neither Critics Nor Reviewers…

Forget about film critiquing, we don’t have a face to rely on for a proper film review. I only remember 2 shows back in my childhood – Jogi Brothers Reviews and Review By Anchor-Actor Varun on Gemini and Teja TV respectively that were decent with the reviews. In the present times, we do have people like CR Hemanth (First Post), Kathi Mahesh (who is hated for weird reasons but is a genuine critic) or Jalapathy Gudelli (who gives to the point one-line reviews on twitter). But sadly, they somehow get suppressed in this mad frenzy world of cinema business.

If film critiquing is about the analysis of films and its medium, film review includes a recommendation for the audience. So not all film criticism needs to end up as reviews. There are a number of websites that provide you with film reviews which seem more or less like a scribbling done involuntarily by a 6th standard student before he went out to play. They look so dry and boring.

Moreover, reviews across all the websites look one and the same. It is really sad that an industry of this scale is still struggling to handle criticism in a healthy manner. The other industries, be it Bollywood, Tamil or Malayalam Cinema have some really interesting critics in the form of Rajeev Masand, Anupama Chopra, Raja Sen, Baradwaj Rangan or CS Venkatiswaran. The only critic Telugu Industry can boast of is KNT Sastry whom I’m sure not many of the present generation are even aware of. Sadly, he passed away last year.

A Tough Job To Handle And A Much Needed One

A film critic’s job is to review and present the movie’s analysis in the most organic form. S/he is the one who is most enthusiastic on every Friday irrespective of star status or the names involved in the movie. Their job is to only give constructive criticism. They do not have and should not have any interest in the business part of the film. For them, a good film is a good film. A bad one is a bad one. That’s it!

Unfortunately, the Telugu Film Industry is lacking such faces. If you think it’s my problem, you can feel free to pause here for a minute and think of some reliable names who have consistently given reviews on the face. See, anyone can review and recommend a movie that is good. It is only when you criticize a bad movie in a constructive manner, a healthy atmosphere to make better movies can be created and sustained.

Film critiquing educates the audience and throws new light in perceiving cinema. Every industry needs it. But the issue here is a little more than just that. If on one hand, we have a poor film critiquing band, on the other hand, we have the audience (read fans) who worry about a movie more than star cast, maybe Telugu cinema is the only industry where reviews are taken personally. So, it is completely not the critics’ fault.

While the critics shouldn’t take a back step in analyzing movies as they are, maybe the audience should also get sportive enough in acknowledging these. Keep the star status and the fan base aside, it’s a movie at the end of the day. If the criticism is not provided constructively, as a critic, he/she is going nowhere. It is a give and take business. Critics are here to bring a healthy discussion on the table. Let them talk, else you are going to get stuck watching the death-defying gravity fights and item songs forever.