[VoxSpace Selects] Mid Year Round Up 2019 : Break Out Stars Of Telugu Film Industry 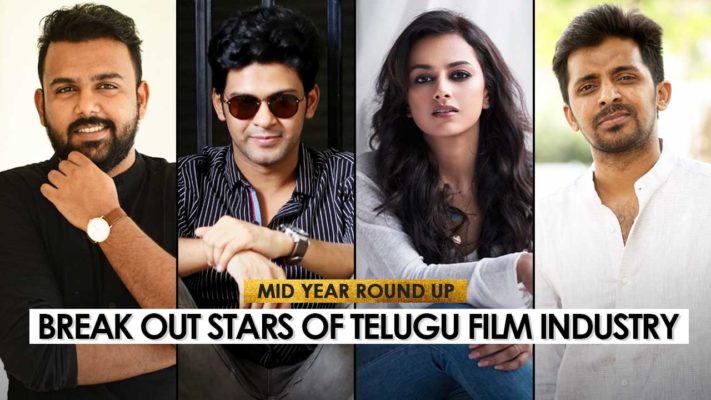 2019- Our Mid-Year Round-Up For Telugu Cinema

This I believe is one of the best years for the Telugu film. There is a consistent supply of low and mid-budget films that have the scope to try new concepts without really causing too much of a loss to the producers. While there are bigger films that come out all the time and they are essential for the industry to survive. The smaller films are where you find new talent, which takes the Telugu cinema to new heights. Here is a list of actors and film-makers who really stood out in 2019 so far.

Naveen shot to internet stardom with his AIB video where he rants about the sad state of our education system. In the searing yet hilarious rant, we see a vulnerable yet proud student who stands up for himself. He made his Telugu debut with the hilarious detective film, Agent Sai Srinivasa Athreya. In the film which he even co-wrote, he plays the titular role as a bumbling detective who is waiting for the right case. He possesses this kind of screen presence, which won’t let you look away from the screen. He plays it in a way that you can see a kind of child-like wonder in his eyes while infusing it with the right amount of pathos to really make the movie to shine.

Shraddha Srinath is no fresher to the cinema. After making a splash in the Kannada blockbuster U-Turn, she went on to make great films in Kannada and Tamil cinema like Vikram Vedha, Kaatru Veliyidai, etc. She made her Telugu debut with another amazing film Jersey and what a debut it was. In the movie, she plays a disapproving wife to the dejected father played by Nani. It would have been very easy to make her an unlikeable character because her character could have come off as a nagging wife. But she plays the character in a way that, even though she can come as mean in certain scenes, you understand the reason for her behaviour.

Priyadarshi is no stranger to the Telugu audiences. He has been consistently appearing in various big and small budget films, playing interesting characters. He is on this list because of his latest film Mallesham. While his comedic roles made him a household name, here he is trying his hand in playing the lead in this inspiring biopic. While I knew that he was a great actor and was expecting him to ace the role. He really bowled me over with his heartfelt and extremely well-observed performance where he literally becomes his subject.

Ananya Nagalla is a great new find for the Telugu film industry. While she has been acting for many years, Mallesham marks her big screen debut. She plays the wife to the over-ambitious titular character. She plays the role with such conviction, that you can understand her to be the wind under his wings, without her uttering a single word. I hope to see a lot more brilliant work from her in the future.

Satyadev has been consistently doing great work in various Telugu films. He is on this list for two particular films. Firstly Bluffmaster, while the movie did not do amazing business at the box-office. Satyadev shines as this two-faced con-man, the role also allows him to play multiple zany characters in the same film. Secondly, Brochevarevarura, now this was a film that went beyond my expectations. It was one of the best Telugu films in recent times. He plays the most understated character in this ensemble piece full of colourful characters and manages to stand out.

Last but definitely not the least. Mr Bhascker has previously stepped his feet into acting, while he was not bad in any of these films, he did not stand out. With this year’s Falaknuma Das, he really hit it out of the park. As Sydulu, he plays a brash but duty minded cop. From the dialect to the body language to the line delivery, he makes you forget you are watching a film. With the very little screen time that is afforded to the character, he makes the presence felt. Hence this spot on the list.

Now getting to the film-makers. There are two film-makers who hit it out of the park with their sophomore efforts and showed the industry that they are here to stay.

Gowtham Tinnanuri had previously made Malli Raava. While it was a good film and got great reviews, it did not work that well at the box-office. So, with his second effort, he comes out swinging with an inspirational sports drama, Jersey starring Nani. The movie came out with a lot of buzz attached to it and exceeded every expectation that I had. It was a genuinely emotional and endearing drama about the undying love of a father.

Now coming to the MVP of this year. I was mixed on his first effort, Mental Madhilo. I liked the film but wasn’t really blown away. But with his second film, Vivek made one of the best films I have seen all year. Brochevarevarura is crime caper, which sets out to entertain people from all demographics and succeeds to do so. With this film, he has created a completely apolitical comedy entertainer that will stay with me for a very long time.

All in all, it has been an eventful first half of the year. Here’s hoping to a more exemplary second half.