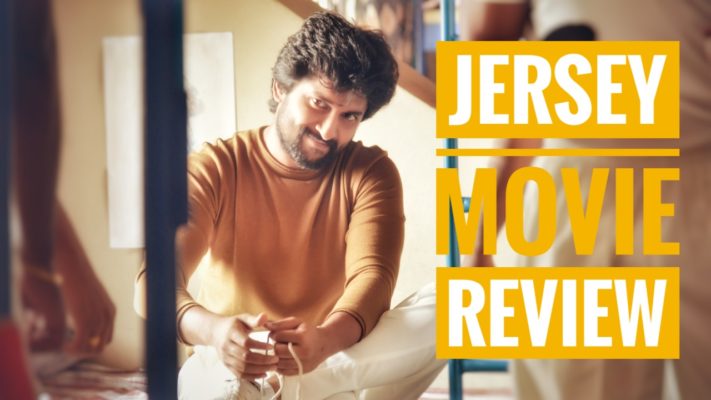 Jersey – A Film That Puts Telugu Cinema On A Horizon

Off late, Telugu cinema is churning out biopics one after the other. However, a sports-based drama is not something you would find often. ‘Jersey’, directed by Gowtham Tinnaluri is a story of Arjun (Nani) a highly talented cricketer playing for Hyderabad, dreaming for a place in the Indian National Cricket team. He is supported by his wife Sara, (Shraddha Srinath) and has a mentor in coach Murthy (Satyaraj) who are constantly backing him.

Unfortunately, things don’t go as planned as we see Arjun after a decade, having quit cricket, is also suspended from his government job. He struggles to make his ends meet and his marriage is going through a turmoil. He now has to depend on his wife who is running the house. His only solace is the bonding is his son Nani (Ronit). The rest of the film deals with how Arjun transforms into his older self and redeems his cricketing career amidst difficulties.

The film’s screenplay travels seamlessly back and forth between the ’80s and ’90s showing us different phases in Arjun’s life. To showcase the unapologetic character of Arjun in his heydays to a doting father who is emotionally broken, Jersey packs a punch with impeccable writing. Anirudh Ravichander lifts the film with a terrific background score. A special mention to cinematographer Sanu Varghese and the other technical crew for bringing authenticity to the sport which gives us an impression of watching a real cricket match. Shraddha Srinath as Sara makes a promising debut in Telugu.

Whether it is letting out her frustration on Arjun or choosing to remain silent, she plays with ease. In spite of a lot of trouble brewing over in their marriage, their relationship has a great sense of maturity with a beautiful understanding between them which is often conveyed through their silences. Rao Ramesh as the lawyer doesn’t get much screen space. Satyaraj as the coach though slightly goes over the top, but it is still good. The child actor Ronit is good to watch and although his expressions sometimes get repetitive, the relationship he shares with his father is very endearing and heartwarming.

However, the film completely belongs to Nani. His transition from a fiery swashbuckling cricketer to a frustrated failure and later as a doting father willing to do anything for his son, he singlehandedly owns the film. While he has already proved his acting prowess long ago, this performance will rank as his best. Watch out for the scene at the railway platform as he lets out his emotions. It will be remembered for a long long time. Often, such sports based genre have an element of predictability, but here is where the director Gowtham shines with a brilliant climax.

The director made a mark with ‘Malli Raava’ earlier and now with Jersey he has notched up as one of the promising directors to watch out for. This is a film where the entire cast and crew can be proud of and earns them respect. At a run time of 160 minutes, Jersey is an emotional endearing saga of hope, inspiration and triumph which shouldn’t be missed.