Review Of Brochevarevaru Ra : A Wholesome Entertainer Which Redefines The Art Of Storytelling 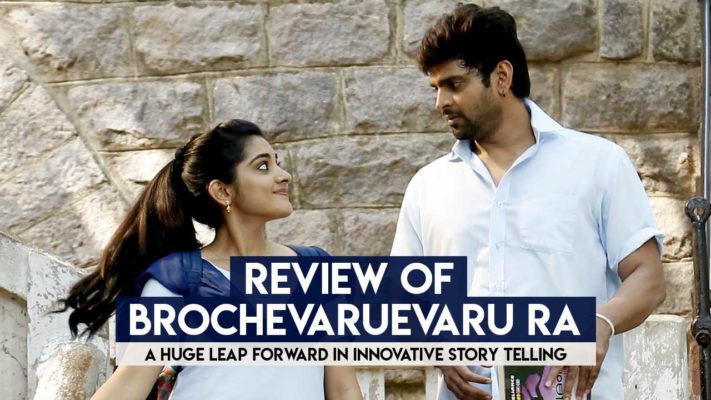 The Next Generation Film Makers

The Telugu Film Industry right now is going through a welcome transition, where the next generation filmmakers are coming into the picture and are taking forward the legacy of telling amazing stories. This list includes the set of filmmakers like Tharun Bhascker, Sandeep Reddy Vanga, Venkatesh Maha, Gowtam Tinnanuri, etc. These filmmakers particularly are redefining the art of storytelling with their fresh and impactful approach towards form and content. And it’s heartwarming to see the kind of stories they are bringing out. Another filmmaker who joins the stellar list of exciting new talents is Vivek Athreya. I recently got to watch his latest movie ‘Brochevarevaru Ra’ and was left amazed by the kind of movie it is. Let’s try to understand what this movie is, how impactful it will be for some time and why perhaps it is one of the best entertainers we have had in recent times.

The Story Is The King – A Brilliant Script

The story of the Brochevarevaru Ra is such that if I talk about even a single scene, it might end up spoiling the whole story and the incredible experience you are assured to have while watching the movie for the first time. So without delving much into the story, I will try to talk about the overall shining aspects. The movie starts with Vishal (played by Satya Dev), a writer who is trying to find a producer for his script. And in that pursuit, he ends up meeting a famous actress Shalini (played by Nivetha Pethuraj) who seems interested in Vishal’s story. Vishal then starts narrating the story to Shalini and we jump into the story and the lives of ‘R3 batch’ consisting of Rocky (played by Priyadarshi), Rambo (played by Rahul Ramakrishna) and Rahul (played by Sree Vishnu), three friends who keep failing every year and are stuck with studying inter and Mithra (played by Nivetha Thomas), a passionate dancer at the outset.

One commendable thing with the story of this movie is that it’s not restricted to one region and language. Though it’s a Telugu movie, I strongly believe that this story has a pan Indian appeal and needs to reach out more and more.

One of the biggest challenges in this movie is the screenplay. The story gets a little tricky as it progresses to the midpoint and it was important for the movie to survive and prosper based on a surgically written screenplay. This challenge is met with utter expertise by writer and director, Vivek Athreya who does an outstanding job with it. The screenplay is airtight and doesn’t afford any dull moment. It will keep you hooked right from the beginning to the last. The world building is smooth and organic and that helps the makers to make you believe in the relatable logic of the story. The dialogues too are speckled with sharp wit and never slip into the pretence of rhyming and philosophy as is often seen these days. Since the major driving force of the movie is humor, the dialogues are tailored to be snappy and sharp, landing with the perfect timing.

What really works is the seamless transition between the two stories and the effective narrative tool used by the director to take the movie forward. I really like the flash forward style which is used in some parts of the movie. Vivek Athreya as the director is really impressive and manages to capture the various emotions of the characters beautifully. It’s refreshing to watch the kind of treatment the movie is given.

The conflicts come organically and so does the solutions. The stakes keep getting higher and will make you tense and feel scared for the characters. The twists unravel smoothly and are bound to surprise you. It is satisfying to see that the writer never takes any convenient route for any sort of solution or put any scene just because it is cool. There are several moments where you will surely have goosebumps. The movie flows with the perfect pace and never makes you feel bored.  Towards the end of the movie, I was thinking how would the story end and it is satisfying to see the final resolution of the movie.

Biggest USP Of The Movie

The biggest aspect I like about the movie is its comedy. It is astonishing to see the kind of humour this movie generates. The comedy element never looks forced, cheap, derogatory or slapstick. It brings out genuine laughter from the audience and you are guaranteed to be entertained. There were multiple scenes where the audiences including myself were clapping.

Another thing I like about the movie is the INTERVAL BANG. It was outstanding! I didn’t see it coming at all and this is how an interval bang should be – Organic and Surprising. During the intermission, I thought that this movie might face the same issue as other movie does, a flat second half. But the second half is equally crisp and gripping as the first half is. In fact, the second half keeps getting better and exceeds the standards set in the first half of the movie.

When you have a good tight script, half of the work is done. The rest of it depends majorly on the performances of the actors. It is a key factor in any movie to have a cast that looks perfect for the characters. This movie has done that well. The cast is perfectly done and the actors in this movie are just stupendous. They make the characters lively and portray them with pure authenticity.

Nivetha Thomas who plays the character of Mithra stands out for me. She adds so many nuances to her character and adds small and tiny details in her expressions, which is soothing to see(Have we found a successor to Nithya Menen, perhaps?) Sree Vishnu does an incredible job with his performance and is convincing as an emotional Rahul. The sweet and innocent relationship that Rahul and Mithra share is shown with poignancy and the chemistry between Sree Vishnu and Nivetha Thomas is translated beautifully on screen. Priyadarshi and Rahul Ramakrishna share an amazing dynamic between them and are pleasing to see on screen. The trio of Vishnu, Darshi, and Rahul has a strong screen presence and are a treat to watch. Satya dev does a good job in showing the vulnerability a struggling writer has and Nivetha Pethuraj impresses with her character of a humble and kind-hearted actress.

The Heroes Behind The Screen

It’s really important to have a crew who can match up with the director’s vision. And this movie is a perfect example of that. Firstly, the music and the BGM by Vivek Sagar is fantastic. He manages to elevate the story with his spectacular music. Although I like all the songs in the movie, the title song Brochevare stands out, as it perfectly describes the situation it is being played in. The sound design is done well and the team manages to create the surroundings in a convincing manner.

The cinematography by Sai Sriram is on point. The fact that the visuals are crisp and appealing tells how good the work with the camera is. I like the colour pallet they go with for the movie which is light and serene. Ravi Teja Girijala does an impressive job with the editing. You will never feel if any scene is too long. Some of the transitions done in the movie are superb and poetic.

The biggest factor which impressed me is the production design and the costume. These two aspects together are important to form the aesthetics on the screen. The art direction done by Ramanjaneyulu is great and adds a lot to the narrative being told. The styling done by Shruti Kurapati is on point and she manages to bring out the subtle differences of the characters’ background. These both are responsible for the look and feel of the movie and they have done so well that subconsciously you will feel as if you are actually in the world created in the movie, next to the characters.

All in all, Brochevarevarura is entertaining and will leave you spellbound with the way the story pans out. I haven’t seen any movie in recent times in any language which has such a fulfilling all-round package. This is the kind of movie we need going forward. I have booked my tickets for watching it the second time and you too hurry up and watch this movie immediately. Cheers.

12 thoughts on “Review Of Brochevarevaru Ra : A Wholesome Entertainer Which Redefines The Art Of Storytelling”