“Ladka Huya Hai Ya Ladki?” – Breaking Away From The Binaries Of Sex And Gender With Daniel Mendonca 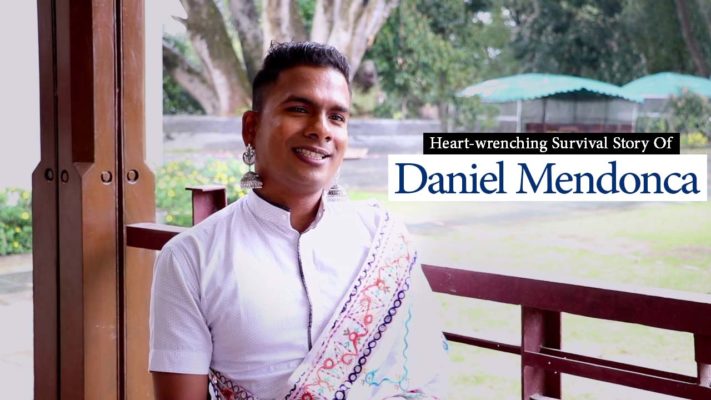 Is It Time To Question The Redundancy Of “Ladka Huya Hai Ya Ladki” ?

Daniel Mendonca leaves a staggering narrative on the experiences of growing up in the body of a chakka; a narrative lucid yet poetic, so wrought in common people’s vocab that it effortlessly sinks into our skin inducing us into a poetic trance. Queer community has been vigorously subjected to a vantage point that largely suited the heterosexual point-of-view. In the process, it has distanced the queer and intersex from their own perspective and input. Mendonca challenges this vox populi questioning the status quo that we, the majority, have conferred on ourselves. This is precisely where Tape A Tale is successful in setting a paradigm of queer people’s experience of “coming out” of the closet, or the futility of it. Mendonca tossed away this theory of “coming out” with as much dexterity as expected from a person who decided to live in the body that was given birth to-

“…I tell people, I never came out. The only time I came out was out of my mother’s womb. You perceived me to be unnatural”

Mendonca is the first Indian brand ambassador in the United Nations representing the LGBTQ community, demanding for inclusive spaces for the third gender. She the activist who pioneered the campaign of separate toilets for transgender students in Indian colleges. Mendonca’s awakening into the basic rights of being a transgender in India is the culmination of a series of trauma. Far from being a bed of roses, the former years of their (Mendonca) life pushed the LGBTQ rights activist towards unemployment and prostitution; their mother was detected with cancer after her husband left her in abject poverty for deciding to raise a chakka.

On speaking about the perils of gender fluidity in India, Mendonca recounts how employers rebuked, asked for sexual favors, and refused to grant a job solely because of sexual identity. It was before the country was liberated from IPC Section 377 and people like Mendonca were vehemently refused normal preadolescence, school education, social recognition, job, and other human rights.

A Beautiful Trajectory Of Heartfelt Confessions

Tape A Tale force us into picturizing the harrowing journey of an individual who grew up in a mohalla of ignorant conservatives and yet decided to carry forth the fight of existence from a body that defied socially construed definitions of sex and its two clear demarcations- male and female.

How difficult it has been to claim a body that has XXY chromosomes as their own? In the 7 minutes 8 seconds that the Tale lasts, we get a glimpse into patriarchal smug attitude that justified Mendonca’s rape by their cousin, and administrative callousness that first refused to lodge a diary against it and in return threatened to slap with 377. Lack of any meaningless rhetoric and constructing an unconventional cascade of opinions form the nitty-gritty of this speech. Audacious in its approach, Mendonca offered us an insight into the tyrannies of a body rebelling to come out of its shackles breaking free from the taboo surrounding it.

Tape A Tale has a poetic justice to it. Mendonca’s eloquence is far from being subtle or coated with metaphors. Till the end of Mendonca’s speech, we see an activist refusing to accept gender conformity through surgery, surviving college education on Social Work, and contributing towards understanding gender sensitization and sexual violence. In an overtly gender stereotyped nation, this short speech is an act of deliverance for Mendonca who is rallying against third gender violence. The speech becomes cathartic and unpretentious in its quintessence.