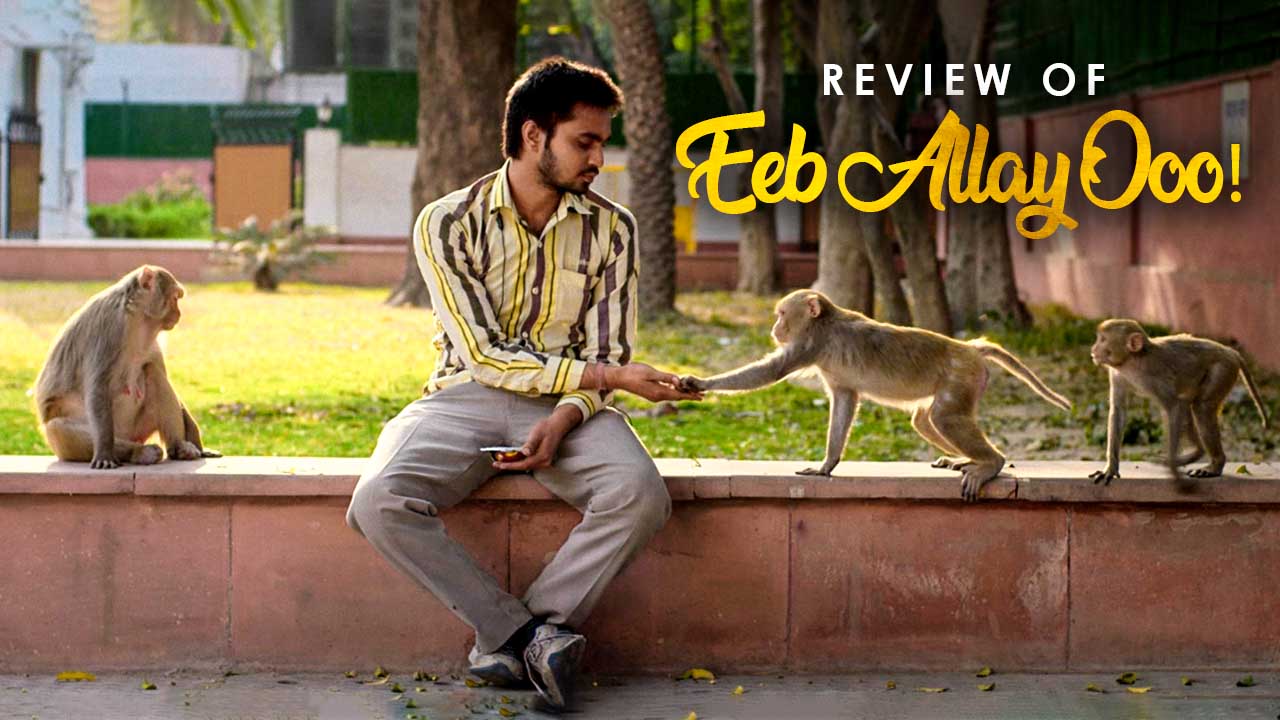 Prateek Vats’s Eeb Allay Ooo is a movie which serves as an allegorical reflection to multiple issues plaguing India in today’s time. The movie’s essence is captured in a brilliantly used statement within the movie – ‘Gods become Pests’. The statement couldn’t be truer and scarier in the times we live in, when socio-political standpoints are heavily colored by religion specific sentiments. ‘Eeb Allay Ooo’ dares to make thinly veiled statements about the specific cultural upheaval apparent in the country, without ever stepping into the zones of bias or propaganda. It manages to do so, by relying on a narrative which involves humans and apes, often blurring the lines between the two evolutionary counterparts. And for this reason, ‘Eeb Allay Ooo!’ flourishes as a movie which is hyper-relevant and an incredibly important viewing, if not just to revel in its brilliance of stitching not too distant societal commentaries within the fabric of an occupational satire.

The movie which was awarded ‘India Gold – Golden Gateway’ and ‘Young Critics’ Choice Award’ accolades at the Mumbai International Film Festival earlier this year, takes a focused region specific ‘monkey infestation’ problem as a moniker to talk about a changing country, often burdened with chest-pumping nationalism and existential loyalty, often measured on the scale of overflowing zealotry.

Anjani And His Monkey Business…

The story of Eeb Allay Ooo!, a scare-call which is used by traditional monkey chasers to drive away unruly Monkeys and Langurs away (Eeb meaning Langur, Ooo meaning Monkey and Allay standing for Human), starts with an introverted urban migrant, Anjani who lands a job as an aforementioned Monkey chaser. Much like the stranger city interacting with its reluctant migrants, Anjani (played by Shardul Bhardwaj) finds it much difficult to make any head way with his ‘chasing’ activities. The Monkeys, it would seem have clearly developed an evolutionary resistance on these name callings. The areas of parliamentarian significance located in New Delhi, is as much theirs as of the next human. Anjani failing repeatedly and being ridiculed every now and then by his co-workers for his ‘softness’ to scare away monkeys, comes up with inventive ideas to help himself out. Much of the beauty lies in his plans to make sense of the senseless job he has been forced into, and it rings true to the ‘reluctance of newness’ faced by everyone. As it were, we also meet Anjani’s pregnant sister, who bears the duty of making ends meet on a day to day basis, preparing plastic packed eatables from her home. Her husband, a security guard at a recreational facility, is a man of morals leashed up within cultural righteousness.

As the narrative picks pace, Anjani’s various antics in shooing away the apes, heed no result, except that to drive him to a personality bending edge. True to the saying – ‘Man becomes what he fears the most’, Anjani starts to believe in and adopt an alternative personality, which helps him develop a palate for his failures. However, his erratic resort to hardships is short-lived, as his life comes crashing down without any remorse. What is left for Anjani, is to let go of himself in the wilderness of a bustling city, and to accept his animal instincts in keeping himself sane.

A slow descent from illogical but acceptable lifestyle to a logical but radical madness becomes the overarching thematic of Eeb Allay Ooo!. To a keen eye, the film’s political whispers are a joy to come across. As if to talk about the radical Hindutva group and their eccentricities, in code-framing the society while at the same time running amok unchecked, the movie uses the apparent arrogance of Monkeys and their daily activities of vandalizing public properties to great effect. In symbolizing the country’s acceptance of a political ideology because it is easier to follow, the movie uses pocket string-catapults useable only to scare, but not to hurt. Because scare tactics are the forefront logistic of political architecture in the country today. This point is further driven to the point where Anjani’s brother-in-law, much to his displeasure, is handed a rifle for protection. It takes the life out of him, to keep the rifle in his household, where it ironically serves zero purpose. Accommodating fear is perhaps difficult for someone who lives in suffocating low-rooftop homes in thickly populated lanes.

In one scene, we see that the rules of the area, of not feeding the apes, is casually overruled by Government officials, because after-all the rules are for the normal populace and not everyone. Likewise, in one scene, the co-workers of Anjani jump in joy while treating Anjani as a monkey trapped inside a cage. Public lynching becomes a strong thematic here, thus, showing how we as a society find happiness in judgmental rulings. Eventually, Anjani’s character is an implication of a gullible country stepping into an unsure future, and thus clutching onto an ideology which reeks of comfort in familiarity, but not because it is measuredly justifiable.

A Brilliant Cast To Showcase A Nuanced Story…

While the movie excels in conversing about many issues at once, it is at heart, the story of a man, Anjani. Shardul Bhardwaj’s Anjani is a lost soul but with a head full of wall-puncturing ambitions. Shardul infuses the right amounts of keen and innocence, to make Anjani instantly likeable from the first frame. As the senselessness of his job gets on his nerves, Shardul infuses a sort of narcissism in his defiance to the already established system of dealing with the monkey problems. Beaten to frustration, Shardul’s Anjani comes up with self-glorified ideas which he feels work effectively, and in so doing almost climbing up a pedestal of self-preservation. Eventually, he finds solace in chaos, when he completely gives up on ‘actually thinking’ and joins ‘into the herd of believers’.

If Shardul’s Anjani is a cynical specimen, his sister, Shashi, is an optimistic being. Played by Nutan Sinha with smack practicality, Shashi knows her way around in making life worth living. Her focus is unwavering, and her purpose is clear, thus serving as an anchor-point for ‘no-nonsense’ communal living. Anjani’s co-worker, Mahinder (Mahinder Nath) also impresses as a man who deeply loves what he does; that is to scare monkeys away and perhaps lazily talk about the city in his tunnel-vision for it, as he smokes up a hand rolled beedi.

Anjani’s neighbor, Kumudh (played with striking screen presence by Naina Sareen) plays a nurse who shares Shashi’s practicality, while also adding a speckle of idealistic argument to her existence. Kumudh plays the anti-thesis to the lost Anjani, and perhaps remains the only one who can dart through his thick-skinned perceptions. Naina’s Kumudh thus becomes a symbol of hopeful yet comprehensive step forward. At the end of the day, the movie, a masterfully made socio-political statement is a testament to the deeply intricate story written by Shubham. The Director, Prateek Vats and Shubham bring a sense of hyper-realism to the unfolding of the story which is rare. Along with cinematographer, Saumyananda Sahi, the makers bring almost a documentarian finesse to the proceedings, which instantly manages to transcend fiction. From broadly sunny framings, to penlight illuminated slum-lanes, to reactionary causes of monkeys to the chaos heavy final shots, the makers realize a full-fledged world which breathes and moves along with its characters. This endeavor is ably captured in a mood with Anshul Takkar’s atmospheric music. Never over-indulging in the pathos of the protagonist, Anshul uses a distant instrumentation to effectively canvass a moment than just a mortal man.

Thus, Eeb Allay Ooo! is a movie which will be talked about for quite a while, once it reaches the point of a worldwide release. It is a broadly stroked derivative piece, which serves a curious learning curve, a purpose often forgotten by movies these days. The movie perhaps is about wild animals living in controlled environments, and always rattling at their make-do iron cages, as the whole world laughs at their struggle. And then it is also about Monkeys.