[VoxSpace Life] Sandhya Marawi : A Different Story Of ‘Earning For A Living’ 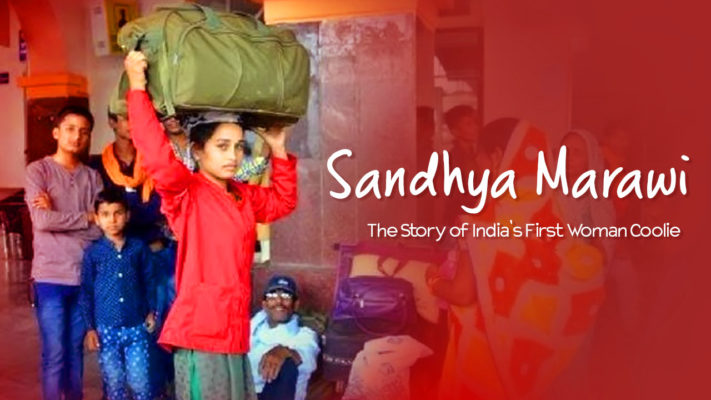 Margaret Sanger beautifully and accurately puts forward the perils of leniency on part of a woman, she opines “a woman must not accept; she must challenge. She must not be awed by that which has been built up around her…”. Sandhya Marawi is yet to gain popularity and celebrity status that Margaret Sanger achieved to receive by the end of her life, fighting for legitimating women’s right to birth and pregnancy. The stories and struggles of both these women are radically different, belonging to two different eras, however, what binds them is their spirit to remain untamed, to set new milestones for generations to follow.

Our Sandhya Marawi has created a new record for being India’s first woman coolie, the confident mother and homemaker, lifting passenger bags and flinging aside age-old stereotypes. Sandhya has been working for more than a year, yet mainstream media has done very little to welcome her story. After her husband passed away, Sandhya Marawi took upon herself the responsibility of looking after her three children in the most unimaginable way possible in Indian society. By becoming a coolie, she is not merely admonishing tenets of gender discrimination but is actually living according to her own terms, claiming her right in a society predominated by sexism. Sandhya, belonging from the lesser privileged section of the society has once again proved that ideological influences can hardly be acceptable to restrict themselves to any country or class in a society.

The Story Of An Undaunted Mother Amongst Us

Sandhya’s struggle is at odds with the prevalent idea that bone-breaking jobs are reserved for the men of the household, which again validates arguments pertaining to why men should be provided with the best and kept at bay from household chores. In a heterosexual family, this demarcation of power still operates from even if under the rugs. Sandhya Marawi has managed to upturn such notions and is convinced enough to confront with the odds of her jobs. This 30-year-old woman does her best to live up to the demands of being a coolie that too on a busy railway junction.

You can spot Sandhya, submerged into her daily chores, running back and forth with passenger trolleys at Katni Junction in Jabalpur, Madhya Pradesh. She is a feminist, strongly rooted and intertwined with the practicalities and contemporary socio-political scenario within which she is working. Amidst the cacophony of all the negativities, she has been successful enough to surround herself with confidence and positivity required after travelling 45 km on a daily basis. On busy days, she has to hassle and compete with her male colleagues often accommodating jeers and gazes as part of her job profile. It is applauding how Sandhya is trying to do away with gender stereotypes from a small platform when juxtaposed with the international parades and conferences trying to reach out to every man and woman. Gender stereotyping has seeped into society and has normalized itself after decades’ of unrestricted practice. In this context, I would like to dedicate a few lines to the online campaign in Russia that was generated this wear on Women’s Day, March 8th to rationalise the identity of women and obliterate notions of tenderness, frailty and such others. The campaign was initiated by six young people who dared to venture out of conventionalities, the odds of which is definitely more for the poorer sections in a third world county like India.

Sandhya Marawi works with 40 other male co-workers in a job that demands tenacity and physical readiness in order to feed three hungry mouths, excluding herself, back at her home.  The agenda of the 21st century, to raise children sans stereotypes, gender bias, and with the introduction of gender fluidity, is being accomplished by Sandhya in a way. In her day-to-day struggle to ensure her children are well-fed is a huge contribution to the crisis ensuing from sex-based discrimination. The discrimination that leaves many women ostracized, where women are able to walk out of this disparity due to money and social influences, whereas the downtrodden remains trudged in the mud. Sarojini Naidu, one of the greatest Indian feminist poet and activist writes in her revered poem From the Broken Wing- “Behold! I rise to meet the destined spring…/…upon my broken wing” would have been proud of Sandhya’s accomplishments.

The Woman Who Created History Should Be Remembered

Sandhya Marawi and her story have not become a part of media coverage, no well-known news channel has bothered to broadcast her interview, because they were not taken in the first place. What remains of her on the internet are snapshots from her professional life, looking bright in a red coat, and a few lines stating the general facts. Sandhya’s story needs to be presented on an international platform. She has made herself an invaluable part of history, which needs to be given its own space in memory and time. Indeed very little is known about her husband, her personal struggles, and how she plans to envision her future. Here is waiting for more such Sandhyas to break the barriers and live with pride.