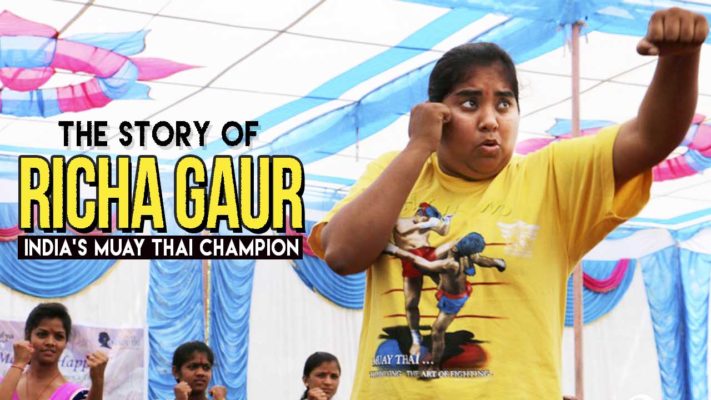 In a country like India, where people are numbered in billions and the income hierarchy is extremely steep, the staircase to being “someone” from a “no one” is indeed quite strenuous. The matter simply worsens if the “no one” is a woman” and that too from a humble background. Yet, the truly talented ones with a burning passion to become someone in life can never be bowed down by any odds. Today’s story features yet another superstar in her own might – who destroyed all the worldly odds and went on to become the ‘Muay Thai Queen of India’. She is Richa Gaur–a seven-time national gold medallist, international Muay Thai champion, Asian Olympic qualifier and a proclaimed martial arts coach.

Learning about all these titles bestowed on a girl makes most Indians proud – they see the pool of talent the girl is. However, what most people fail to note is the struggle that goes on in nurturing the talent – not only the physical struggle but the mental struggle against patriarchy and bullies. In a country stuffed with gender-specified roles right at childhood, growing up was pretty difficult for Richa, who always had a penchant for sports and had a sporty physique. Talking about her plight as the odd-one-out in her class with The Better India, Richa shares, “As is common during teenage, most girls in my class would be engaged in gossip while I concentrated solely on sports. Plus, I only had boys to practice with, because of which, I was bullied throughout my high school. People would comment on how ‘boyish’ I looked and call me a boy all the time. It went so bad that my studies were affected and I performed quite poorly in the board exams.”

If we say that credible sportsperson in our country has an inspirational story to tell, we won’t be really wrong.  And the case is no different with Richa Gaur either. Her success is an aftermath of the desire to survive, the will to fight against all odds and the courage to nurture her talent. In fact, Richa’s struggle began right on being born – she was a premature baby weighing just 1.6kg. Although the doctors were unsure of her survival, Richa credits her parents’ relentless zeal to make her survive that actually helped her see the light of the day. “I’ve been told that I was really tiny and weak at the time of my birth. Though I became healthy eventually, my parents were extremely cautious and placed no restrictions on me that girls in India, including my elder sister, faced while growing up. And I grew up a tomboy,” says Richa.

Admitting that she was an average student in school, the 25-year-old firebrand martial arts champion went on to say how drawn she was to sports since the age of six. However, she had to wait till class six to try her hand at martial arts for the first time. This was when her school introduced taekwondo classes in their curriculum. “I was in class 6, and they had started giving Taekwondo classes at school. I just took it up as a hobby and soon realized that I loved the sport and left no stone unturned to excel in it,” Richa notes.

This became the foundation of success in her life as, within just a year, Richa completed her black-belt, won her first medal and got a chance to represent her state at a national-level competition in Delhi. However, as life would have it, Richa had to let go of this golden opportunity for her parents could not afford her travel to Delhi.

For any student in middle-school, constant bullying is depressing. And Richa was not aloof of the emotion either. Not only did Richa had a sporty physique, but she also had to train with the boys as not many girls in her batch were interested in sports. As a result, they would bully Richa in numerous ways, making her feel a butt of ridicule on many occasions. However, the sportsman-spirit in Richa rose over the meager taunts sooner only to hit by another depressing news – the teacher she had always trained under left the school when Richa was in class 11.

Recalling her plight then, Richa says, “By then, sports wasn’t a hobby anymore. I was willing to leave anything to pursue it; even food…I was very upset and wanted to train in a proper academy.” However, her parents quite naturally did not want to let her go alone to a bigger academy, worrying about her constantly. But Richa was adamant. All she wanted now was to make sports her career. Talking further about it, Richa exclaims, “All the time, those kids bullied me in school, I used it in my favor. I cut my hair short and dressed to look like a boy. Just so that I could go and train without having my parents worry themselves to death. Somehow, my parents were convinced and let me go.”

By then, Richa’s prospects had elaborated, too. She was mastering herself not only in taekwondo but a variety of martial arts forms including judo, kickboxing, and Muay Thai. And before she knew it, she had become an expert in Muay Thai and chose it as her definitive career. “Unlike Taekwondo or karate, which have a set of rules, Muay Thai was a whole new experience. More like street fighting and kickboxing, you could never predict where the next blow would come from,” says Richa.

Medals Followed, And Soon She Became The ‘Queen Of Muay Thai’ In India

From winning accolades for her state, Rajasthan, to becoming the national champion, soon her accolades grew. However, when the time came to represent the country in Thailand, sadly neither the state nor her academy came forward to offer help. It was then that her college management decided to step in alongside her father, who used his Provident Fund savings to help her participate. Thanking them for all their support at the oddest hours, she proudly claims, “I didn’t disappoint him. I came back home a World Champion with a Bronze medal.”

It is often said that the road to success never ends. While, at one point, she bagged the most coveted Bronze medal at the World Muay Thai Championships, at the other end, she became a victim of gender politics at the Muay Thai Federation of India. That is when I got the real taste of gender-based politics in sports. Some officials would be irate because I was a woman and had accolades to my name. I would often be threatened to be banned with false accusations and even refused NOC (No Objection Certificate). These situations often pulled me down, but my father remained my pillar of support and helped me sail through this time,” Richa shares.

Defiantly she crossed all the hurdles that life posed in front of her – and soon in 2016, she became one of the Top 100 women achievers of India and received a medal from the then President of India, Mr. Pranab Mukherjee. What makes Richa different from others is that alongside excelling in her personal career, she opened her own academy – The Global Institute of Self Defence and Martial Arts – for helping women stand upright for their safety. This was after the Nirbhaya incident that shook the country.

Today, her academy not only imparts training to individuals but also to state police forces, government organizations, physical education teachers and so on. In doing so, Richa has given her answer to not only those who once bullied her but also to everyone who believes in the age-old gender-normative roles bestowed on women by society. We wish Richa all the best for a glorious career – not only as a player but also as a coach.