[VoxSpace Life] Vitamin Stree: Your Daily Dose Out Of The Patriarchal Suffocation 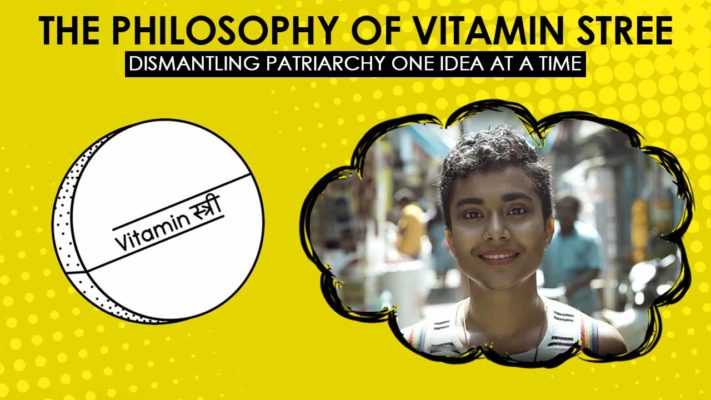 Although there has been no dearth in feminist digital content with the emergence of a new wave of feminism, one digital platform that stands out with respect to its approach towards feminism is ‘Vitamin Stree’. Vitamin Stree represents an online content platform that is essentially women-centric and emphasizes on the ideological, artistic, political and cultural perspectives that are responsible for giving shape to the feminist discourse of the contemporary India. The platform both conceptualizes and generates digital content that focus on the passion points of women. Through their educationally informing content, they aspire to create a positive impact of social change on the regressive patriarchal mindset.

The first video of ‘Vitamin Stree’ was called “What Were You Wearing” and dealt with victim blaming as a social issue in a thought provoking and daring attempt. Vitamin Stree also produced a fitness anthem called ‘Fit is Not a Body’ that addressed issues surrounding body shaming and body image. This fitness anthem consequently led to the noble initiative of fundraising for the Wheelchair Basketball Team of Maharashtra. Besides the aforementioned, Vitamin Stree is also known for generating educational content addressing social issues surrounding women’s rights, fitness and health, and birth control.

When asked about the purpose and idea of initiating a platform like Vitamin Stree, the creative head and editor of the channel, Padmini Vaidyanathan had to say, “Designed for the young, urban Indian woman, who are curious and seeking information relevant to them, Vitamin Stree is trying to reshape the narrative of young women in India. The channel was envisioned as a disruptive channel for urban, Indian women, to talk about issues that are ignored or not talked about enough. To start a safe space online, for women to find information and have conversations, on everything from female sexual pleasure and beauty standards to birth control and laws for women in India. Vitamin Stree focuses on presenting thoroughly researched, well designed and balanced stories for its viewers i.e. women, something that has been missing in the Indian media landscape.”

Redefining The Feminist Discourse For The Young Indian Women

Admittedly, the mission statement of Vitamin Stree states, “We’re reshaping the narrative for young women in India.” With a community of over a million followers, Vitamin Stree feels capable of producing authentic narratives that could make for a significant difference for the women in India. Vaidyanathan sheds light on the content of their channel when she explains, “Our flagship property is called Scratching the Surface, where we take a topic that is not usually talked about and present the issue in a well-researched, objective, funny and thought-provoking manner. So far, we have covered a range of topics – from pubes, menstrual cups, language and feminism, to traveling solo as women, colourism, burnout, millennials and intersectionality in feminism. These are short videos, usually under three minutes and released every two weeks.”

Vitamin Stree further maintains ownership of content property like ‘Pill the Beans’, which demonstrates the channel’s effort towards comprehending and analyzing an issue or a topic presented through personal anecdotes. In this context, the channel has been able to reach out to people and make their voices heard with respect to issues like self-love, gender fluidity, surviving cancer, and body positivity. Another unique initiative of Vitamin Stree as a channel is called ‘Streesearch’ about which Vaidyanathan says, “We also do quarterly, deep-dive surveys to understand where millennial Indian women stand on various issues, through our property called Streesearch. The first one we did was called Censex which was all about Sex, Pleasure and Consent. We are currently in the process of producing our second survey, The Red Report, which is all about periods.”

Fitness Anthem: ‘Fit Is Not A Body Type’

Vitamin Stree’s body positivity campaign, ‘Fit is Not a Body Type’, features about 46 fitness enthusiasts and athletes who are presented to be exercising to a perky background track composed by Tanya Nambiar and Su Real. The anthem addresses the issue of body shaming through the athletes known to be shattering stereotypes surrounding body types.

Tara Kapur, Vitamin Stree’s content head for original productions in the non-fictional genre states the permeating nature of body shaming culture throughout the world and elaborates, “Body shaming exists everywhere, especially now that a lot of people post their fitness regimes on platforms such as Instagram and Facebook. Because it’s become so easy to write a message to anyone, trolls have no filters and say whatever they feel like. I’ve seen some of the messages the women featured in this video have received and it ranges from them being called “too fat”, “too skinny”, “too muscular” and so on. These aren’t things people should have to deal with on a day to day basis, and ‘Fit is not a body type’ addresses that.”

As put forward by Tara Kapur, the prime objective of the fitness anthem is to reach out to anybody who has been a victim of body shaming and trolls. Tara Kapur, further talks about the purpose behind the fitness anthem as, “We also wanted to drive some attention to Vitamin Stree as a whole, and the type of content we create, ‘Fit is not a body type’, is a video around fitness and body image, but we also create a lot of content pertaining to urban Indian women.”

In the economical society, the rate of the economical progress of women have been recorded as considerably uneven and lower compared to the male counterparts. The participation of the female workforce of India has evidently seen a decline when the economy itself has demonstrated substantial growth. Almost 70% of the Indian household income has been allowed to trace back to men. Vitamin Stree attempted at investigating into this issue in order to explore the reason behind the economical gap between genders and labeled the opportunities gap as the primary and root cause.

The channel’s Scratching the Surface Video on the opportunities gap among genders, “Streeconomics”, reserves the aim to inform and educate the audience regarding the major factors constituting the opportunities gap, the cause and effects and the estimated consequences on the Indian economy if such gender based opportunities gap could be eradicated. In this context, Padmini Vaidyanathan presents concerns as she says, “Women need a new working reality, and for the workplace to be equal for everyone, the ground work needs to start at the time a girl is born. There is no magical, overnight solution to this, and with this video, we want to show that gender gap, currently, only widens at every step of a girl’s life. We believe this can and will change, as long as we keep reminding ourselves, where all women are discriminated against, and actively work to resolve that.”

Intersectional feminism is a fairly new concept that is just making its way up the Indian feminist discourse. Vitamin Stree aims at simplifying this concept of intersectional feminism for the uninitiated through dialogues opened by Neenu Kewlani, Dharti Patel, Prachi Sharda, and Tanzila Anis Khan. The prime focus of the conversation is the oppression faced by a gender owing to the various social identities that they are forced to live with.

Pooja Das Sarkar, the director, defends the campaign and its purpose as she elaborates, “It’s hard enough to talk about feminism without getting some kind of backlash from people. But it’s harder to really look within and check your own privilege even when you are talking about equal rights for women because we form a blind spot about it. Here is where intersectionality comes in – how other parts of one’s identity – religion, caste, sexuality or ability also add to the marginalisation that one faces along with one’s identity as a woman. The challenge was to explain this in terms that are easy to understand and break down the complexity of the issue without losing the meaning. We hope the “What is Intersectionality” video starts more nuanced conversations around gender and feminism in the Indian context.”

Baby Steps Towards A More Empathetic World For Women

Vitamin Stree has received exceptional feedback owing to the issues that it chooses to open a conversation about. With an ever increasing community of followers and viewers, Vitamin Stree is reaching out to more and more men and women informing them about the desperate need for an unbiased society. The channel is giving a voice to large number of women and the queer community which seems to be the primary driving force of the online platform.

Pdmini Vidyanathan exhibits high hopes for the channels future when she says, “2019 is super exciting for us. We are mixing up our old formats and experimenting with new ones, all at the same time. Our findings from the period survey are going to be released very soon. We are also looking to expand slowly into other languages, starting with Hindi and finally, we will be collaborating with a lot of influencers to work on new formats.”