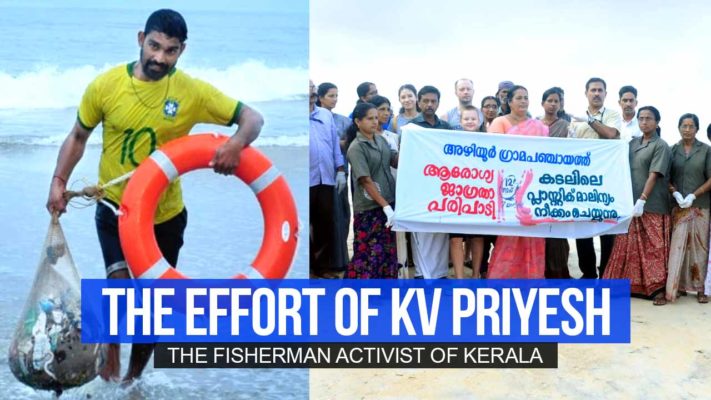 India On The Brink Of A Major Climate Change

Recently with Chennai – one of India’s foremost metropolitan cities – running out of its entire storage of ground water, there arose a death knell for all the Indian cities, especially those receiving comparatively lesser rainfall. Numerous people, who were till now basking in the uninterrupted flow in their tap water, have somewhat also come to realize that water conservation is indeed required for we as a community are inching towards a drastic climate change. A change that might see India bereft of any ground water by 2040.

But have you wondered, in the bigger picture, what are the causes of this climate change? Of course, it is not about not harvesting the rain water. In the bigger picture, anything that is synthetic is adding to this rapid change in climate in ways more than we can imagine. One of the foremost causes of climate change – as we all know it – is the usage of plastic, especially the single-use ones. Despite knowing its harsh reality, we continue to use them blatantly, never caring a bit for its repercussions. However, when we go to some tourist destination, we shudder seeing the plastic litters here and there, not acknowledging the fact that we as a community are catering towards this rapid increase in plastic population. But do we ever help in clearing the litter rather than curb at the sight of them? NO.

However, there are certain people who like to ACT rather than curse. One such person is KV Priyesh, a humble fisherman from Kerala’s Chombala Harbour in Kozhikode, who decided to take the matter in his own stead rather than “sharing” awareness on Facebook. In his tete-a-tete with The Better India, Priyesh says he had to act for “the sea is my home. How would you feel if someone is trashing your home and there is so much garbage that you can’t breathe?”

KV Priyesh Is No Rocket-Scientist But A Common, Aware Person

KV Priyesh has had a very humble childhood. Owing to financial struggles at home, the now 30-year-old man had to surrender schooling after passing class 10. However, this basic education was enough for KV Priyesh to know about the detrimental effects of plastic wastes. So, every time he would see plastic floating around in the ocean, his heart would ache. “While most people think that the waste can be found largely along the shores, the reality is that one can find it in the deeper parts of the ocean as well. It’s not just tourists or passengers cruising on ferries; even fishermen are guilty of throwing plastic bottles that they carry with them to the sea,” he notes.

However, the realization to ACT and not just share on Facebook dawned on him when he saw plastic wastes deeper into the ocean. With this, he resolved to collect all the trash he would come across while fishing and make this world a tad bit better along the way. Of course, this resolution saw him getting ridiculed and being taunted at, to the extent that numerous people started considering him as mad. But, according to Priyesh, if a person is inspired by something and works relentlessly towards that resolution, it culminates into a chain reaction.

And it did. Priyesh’s anti-plastic crusade lasted over a month, and within this period he had garnered quite some appreciation for his deed. Meanwhile, the Azhiyoor Grama Panchayat had also started their anti-plastic awareness programmes around the town, which led Priyesh to contact the Grama Panchayat for further aid in his initiative. “They appreciated the work that I’d done and decided to launch an anti-plastic mission in the ward and include me in all the major discussions. In normal circumstances, I’d have to dedicate an entire hour to find plastic waste in between my fishing hours. Under this initiative, we decided to split the collection drive in a phased manner, under which three-four hours would be dedicated exclusively,” Priyesh said.

With This, The First Phase Of Plastic-Cleaning Operation Began

Behind every successful programme or social operation, there has to be an initiative. The initiative that Priyesh single-handedly took was joined in by not only panchayat members, health inspectors and ASHA members but also by foreign tourists, who had come to Kerala to undertake Ayurvedic treatment and therapies. Further crediting Priyesh of his restless activism, Panchayat Secretary T Shahul Hameed said, “While a 5 km stretch of coastline was scouted for plastic waste, Priyesh foraged for plastic about 2 km into the sea.” You would be surprised to know that Priyesh’s team collected about 13.5 tons of plastic waste and about ten loads of alcohol bottles and cans from the sea and the shoreline.

Before you term this number as pretty massive, Hameed’s next words might startle numerous environment enthusiasts. Talking about the amount of plastic that is currently invading the entire world, Hameed notes, “If a fishing net can catch about 50 kg of fish, there is roughly about 13 kg of plastic in the same load. That is the amount of plastic waste floating about in the sea.”

If Kerala has been able to raise awareness against plastic, a part of this credit goes to KV Priyesh and numerous others like him, who perhaps we don’t know about. As for Priyesh, his anti-plastic activism along with his fishing is at a temporary halt for he has been inducted in the rescue team deployed in the monsoon season in Kerala, which marks the trawling-ban period.

Apart from this, Priyesh has also involved himself constantly in numerous humanitarian causes, such as volunteering for natural disasters like the Kerala floods of 2018 and 2017 Ockhi cyclone. In fact, you would be surprised to know how nonchalantly he set out into the sea after getting signal from the Coast Guard, recovering dead bodies floating on the sea. This was at a time when no one not only championed to accompany him but also did not venture out to even claim the bodies.

However, all Priyesh wants now is to carry about his humanitarian work and make the world a better place to live in. Another thing that he wishes for ardently is to be able to study further. “This will not be an academic pursuit; I only want to study so that I become more aware of the environment and different crises plaguing it. I want to become more aware and informed in my fight for the environment,” says our silent hero. Thanks to such silent bravehearts like Priyesh, we are still able to breathe in fresh air and drink clear water. Had people like them not been there, the world would surely have not been half as good as this.