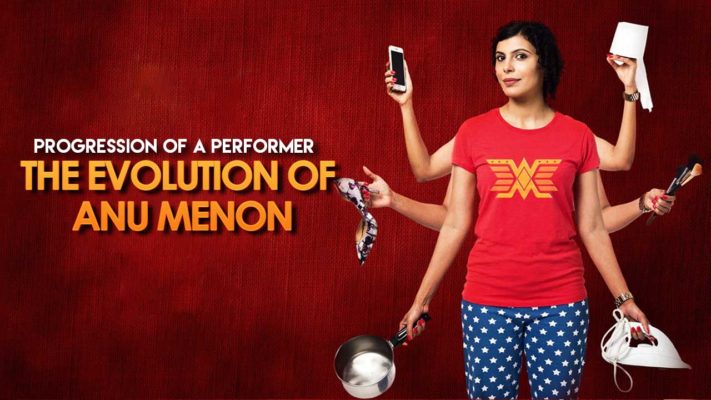 With Anuradha Menon, We Tick A Woman’s Bucket List Of Topics For Inciting Laughter At

Wonder Menon trailer gave us a few moments of cachinnating and marveling at Anuradha Menon, almost a decade after Channel V stopped airing Lola Kutty before dying out altogether. The logo is symbolic being improvisation on the original DC logo of Wonder Woman designed by Milton Glaser when WW was on its way to becoming a commercial success.  This feisty Keralite woman with oily hair and a distinguishable Malayali accent is herself symbolic of Channel’s heydays taking television audiences by storm. As an ardent TV devotee, you would be instantly taken back to the early 2000’s eye rolling and spectacled Kutty, stubbornly refusing to do away with her character or the genre that she was once paid to flaunt before us. Before Lola Kutty could pull Saturday Night Live stunts, with some cursory attention to politics and racism, the show settled into a torpor.

“two female pilots, flying an aircraft. Do we still call it a cockpit?”

A Lot More To This Apparently Ordinary Channel V’s Kutty

Channel V’s long-speculated demise was speculated by critics and Menon alike but could not however douse Menon’s fame. She dutifully holds onto the remnants of her former avatar, her “alter ego” and hopefully the peculiarities will do justice to her new identity as a stand-up comedian, throwing rampant quips at status quo. In an interview to The Hindu, she talks about people’s insistence on seeing yesteryear’s Lola, thereby, making Menon’s struggle to emerge as a coming-of-age comedian tougher. She muses on the nuances of 90s TV that handed down Menon the strictest rules of gender hierarchy, battered stereotyped narratives, idyllic representation of a harmless woman (Lola), and lastly, a gendered presentation of women on TV.

Although Lola played by the rule book, her character was rebellious, and the most unruly of the lot, confidently chanting –‘I am Lola Kutty. Out on a chutti. Oh, what a fun day. It’s a Sunday!’  Her fightback would be now on a more level playing field, where her contemporaries like Hasan Minhaj, Sapna Verma, and Biswa Kalyan Rath have not shied away from trying out the ridiculous and real. Menon takes a leap by scoffing at her conjugal relationship, orgasms, genes, in-laws, pregnancy, government…. just when I thought these subjects strictly come under the purview of men.

Wonder Menon For The Required Paroxysms In Daily Routine

Menon tone is a gleeful mash of condescension, apathy, and mock surprise that would throw you off-guard. Albeit her humour gets a bit edgy but seeing Menon perform is like believing you just unbolted a woman free from the dungeon of drudgery!  It is pure gold how she delivers most of her calculated insults without sounding obscene or sexist. In moments like these, Menon shines like a grand old woman of comedy, firing gunshots of wisdom and in the process, liberates herself from her Channel V stardom. She has so finely observed a woman’s life among other things for a remorseless dissection on stage that you cannot help but spilt into laughter at this misery of being. The tables have turned and Menon is progressively earning points for smart rebukes and slaying in a badass chic style.

Within a memorable yet short-lived timespan, Kutty performed on television with a grave austerity and imposition when show hosts were literally drowned into cakes of makeup that poorly got along with their Western mannerisms. Nonetheless, Channel V itself deserves a round of applause for bringing Menon in a decade when Indian audiences could hardly expect a saree-clad-jasmine-studded woman to be funny.

Lola Kutty was one of the handfuls who gave two hoots about playing by the standard rules. She consciously dissed the advice of going through a surgery to amend for her “flawed face” and fit into the shoes! This was before we become almost alienated from television sitcoms, switching to YouTube and later, streaming channels. Menon’s comeback is fiercely encouraging and a snub to offhand rules that national television complies by. As audiences, it is indeed quite cathartic to witness the eventual birth of Menon like a phoenix from the ashes of Channel V’s poor survival strategies! Menon could give a rest to the fictional notion of an intimidating female show host, now that she is ready to play the meaningful frondeur and an audacious version of Mindy Kaling.