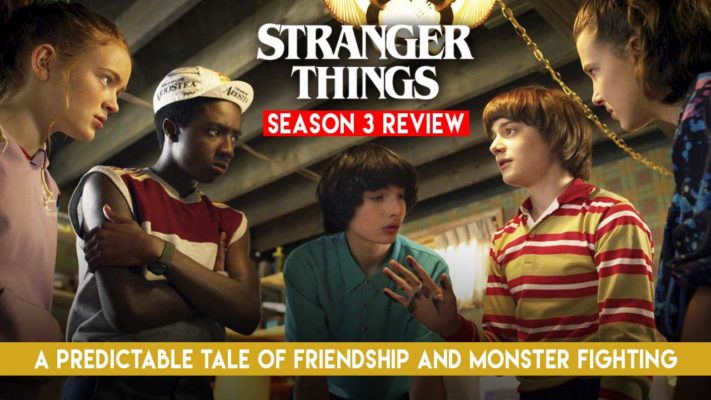 There Is Nothing You Haven’t Already Seen

Whoever knew that a few kids along with their nerdy gimmicks could save the world from monsters and evil scientists! Season 3 of Stranger Things addresses both the fun and the familiar of the previous seasons and that is just about it. It seems to be walking on the same path only changing lanes for the sake of variety. Nevertheless, Stranger Things remain popular entertainment for its fans who would prefer to go nuts over the same monsters and superpowers despite it being uncannily similar and predictable.

Season three of this popular Netflix show splits the infamous nerd gang and the two most daring adults into subgroups where each is pursuing their own problems (or at least what seems like their own problem to them), which finally culminate into an even bigger and united one. All in all, Stranger Things Season 3 is as predictable and long-winded as it could be. However, if you are secretly a nerd inside who lives for alternate dimensions and crazy monsters, go nuts!

Out With The New, In With The Silly

The Duffer Brothers were probably too lazy to work on season 3 of the show and therefore, decided to work with whatever they had in hand while complicating the plot as much as they could to act like garnish on what seems to be a silly plot. The backdrop of Season 3 is the summer of the year, 1985. The favorite nerd gang has hit its teenage and that is clear from the unremitting sessions of making out between Mike (Finn Wolfhard) and Eleven (Millie Bobby Brown) while Lucas and Mike are developing a sense of disinterest towards playing childhood games like the Dungeons and Dragons. Will seems to be unable to accept this sudden change, anticipating that the group is falling apart.

Season three experiments with a few new characters like Robin (Maya Hawke) who plays the super cool co-worker of Steve (Joe Keery) at an ice cream counter in Hawkins’ newly opened very first mall, Starcourt. Dustin (Gaten Matarazzo) reunites with Steve after returning from a camp and after feeling humiliated by his friends who could not believe his story of finding himself a girlfriend at the camp. We also find Lucas’ sister, Erica (Priah Ferguson), for the first time playing an active role in the plot of Stranger Things. While Lucas (Caleb McLaughlin) and Max (Sadie Sink) are desperately trying to save the relationship of Eleven and Mike owing to the pressure created by Chief Hopper (David Harbour) who seems unable to cope with the fact that his adopted daughter now has a boyfriend.

On the other hand, Will (Noah Schnapp), is feeling left out and is distracted by a sense that the Mind Flayer, the monster from the Upside Down, is still lying in wait at Hawkins despite the shutting of the gate separating the two worlds in season 2. Meanwhile, Nancy (Natalia Dyer) and Jonathan (Charlie Heaton) are investigating a case of diseased rats. Dustin, Erica, Steve, and Robin are investigating intercepted coded messages from Russians who have secretly constructed a lab to open access to the Upside Down, beneath the mall with the help of a corrupted mayor. The Russians are also the reason for unleashing the Mind Flayer and the crazy rats. Joyce (Winona Ryder) and Hopper embark on a mission to find out the truth about the Russian intentions. Max’s older brother, Billy (Dacre Montgomery) becomes possessed by the Mind Flayer and acts as a medium for the monster to possess more people all over the town.

All these incongruent subplots start merging gradually (if you can keep track, really) in a convoluted fashion ultimately and sums up into killing the same monster again. Season 2 leaves huge gaps in clarifying silly stuff like how eating fertilizers can make it a symptom of being possessed by the mind flayer or why do the Russians want to open access to the Upside Down! Stranger Things 3 is no more than a teenage drama infused, a ridiculous plot that fails to cater to its sense of exigency trying to keep up with too many subplots. Well, you know what they say –too many cooks!

It Is Good Fun, But Bad Story Telling

Perhaps, what attracts audience the most towards Stranger Things as a show is the sheer drive of nostalgia that it quite generously promises. However, although the Duffer brothers seem to care a lot about the show’s characters, they do not provide much in terms of the steady development of these characters and their relationships. The relationships lose their much-needed meaning, overshadowed by the silly and unnecessary pressure points. The season convincingly fails to explore the background stories and instead tries to touch down important life sequences of the characters through poorly timed montages almost as if it was an afterthought. With all the havoc that goes around throughout the season, by the end it gets over, the show seems to forget about the subplots and the character dynamics with which most of the season was occupied.

Stranger Things Season 3 is a victim of odd and sloppy directorial choices. Moreover, the pace with which the plot moves forward is extremely uneven and turns off the adrenaline rush that the fans have come to expect from the show. The editing is confusing and choppy and does not leave much to the imagination. The season’s finale, ‘The Battle of Starcourt’, is so listless, sloppy and anticlimactic that it almost becomes difficult to believe that it was this same team that had directed the stellar climactic finale (probably the best) of the second season of the show. In fact, the season is so oddly staged and the plot so incompetently handled, that most important moment of shock in the whole season seems excruciatingly bland. To speak the truth, season three of Stranger Things might just be the most boring, incoherent and pointless of all the seasons.

But Does It Really Matter?

There might have been many wrong choices made in the way the show’s latest season has been handled. However, not everything is wrong with this Netflix favorite. After a lot of criticism that the show had faced with respect to its representation of women characters, season three lets the women take the driver’s seat mostly. The adorably whacky bickering between Steve and Dustin has always been a favorite with the show, but this time, it also adds a fresh element of fun with the quirky relationship between Steve and Robin.

The charms and humor of the relationship between Joyce and Hopper form an atmosphere of lightness away from the dark alternate dimensions. Apart from these, the nostalgia of the 90s and perfectly timed comic interventions add the cherry on the top. Stranger Things should be given the credit for continuing to produce a company of characters that find their basis in friendship, love, quirky sense of humor and endless charm. Season 3 might have walked dangerously on the edges but it still keeps the essence of the show intact –friendship –and as long as it keeps that up, monsters or not, Stranger Things will wear the hearts of the audience in its sleeves!