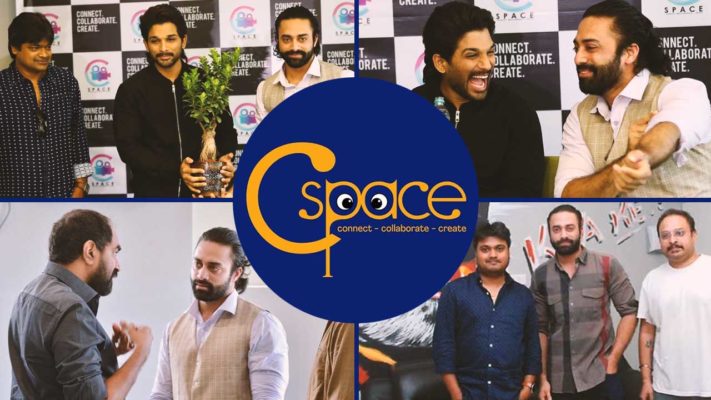 C-Space is a co-working space/incubator that concentrates on creating a workable eco-system for young and upcoming talent to excel at their respective crafts. We went there to have a chat with the people behind the organization.

To begin with, let’s talk about what is the basic idea behind C Space?

Pawan (Co-Founder) -We began with the idea of starting a co-working space, specially dedicated to the film community, the model is similar to the T-Hub i.e., an incubator. And when Rakesh came on board, we started initiating the writing program, pre-production program, and several other avenues.

Rakesh (C Space’s Executive) -- It’s primarily a co-working space because most co-working spaces have a niche in terms of sector or industry-specific. Beyond that, having a certain number of creators will have a certain network effect. Apart from that, without some sort of written content, you can’t really tap into an editor or a cinematographer or any of the other crafts.

We are interested to know and understand what all different activities are currently taking place here?

Rakesh – So, activity or any sort of engagement is the collaborations that are coming forward to us, primary towards writers. There is a dearth around the writer community, the actor community and a bit of the voice artist. Primarily, we are interested in the writers and soon we are going to come out with something around them.

C Space has a certain slate that we have curated through individual creators over a certain period of time. So similarly we intend to build a larger slate where we connect a creator with studios, OTT’s or any production houses or investors.  By bringing around 30-40 writers under one roof, that’s a strong vibe you are putting out to the entire nation. Here it’s more of creating an environment like something of a marriage making between content and materializing them while securing the rights of the creator. Most of whatever is available in the market is going towards the producer or an actor. But now, here it is all about a creator centric ecosystem we are trying to build.

Pawan – There are studios practicing such models but it is for their own indigenous consumption and it is not an open platform to anybody.

So for example, if I walk in with a script, what all opportunities I can expect and what is the mutual benefit that can be worked out?

Rakesh -- Here it is just not like any other co-working space where people come and work on their own. Suppose there’s a writer and on a scale of 100, at the moment we are targeting someone who’s at 70-80. These are all hypothetical scales we are talking about in terms of purely writing target as there is no measure to it. A certain template or structure we go by is looking if the writers are filling in all the blocks or are there no questions left. Most collaborators don’t have someone questioning them and we try to see if there are any loopholes in the idea which has planted. Having said that, it’s not that we put them in some boxes as to following some sort of structure or process. Following a process is not a path to success, but it only quickens it.

Most people think that writing a story makes them capable of writing for the screen. It’s important to understand that writing for the screen is a different art altogether.  If we understand that the writer has gone through some sort of exposure and he is willing to push the boundaries up, we offer him a seat. And then we still question his personal script and what his boundaries are and practice generic level of certain exercises. It’s more of a mentoring and just shouldering the other person. It is an institute and it’s not a course.

Pawan – People approach us in different stages. It can be at ideation, synopsis, the first draft, the first episode or full bound script. We also take decisions on what stage of the project they are in.

Who are the people involved in the team overlooking the process and how do you take it forward from there?

Rakesh – At the moment, we have around six of us who curate the content. I personally have been writing for a while on various projects out there in the market. I curate only on the basis of what the content is or if someone is telling an honest story. We see if the writer has some sort of awareness towards his own craft. You don’t judge the writer by his content, but by the grammar and by the process that he is following. Those are the ones whom we are able to nudge and get them to break the boundaries. We will start addressing the other people at a slightly later stage. Because we are looking to bring a change at the grass-root level itself.

We will help them right from script to taking it to screen. Once we nudge them and they have put in enough effort to bring the script to us, we put them on an optional agreement for a year. We then put it under a slate and peddle in terms of finding the right production-intent for it and create a producing entirety of it. We also try to negotiate on the positioning as we have a lot of digital products put out there and getting the right position also matters.

Any other industry hasn’t done something of this capacity. We would like to know where did all this begin, as in how did such an inclusive idea start?

Rakesh –They (Navdeep and Pawan) started off wanting to write a story and wanting to start a co-working space and Pawan wanted to partner with RGV which didn’t work out.

Pawan – My initial idea was to bring all the crafts together under one roof. I was looking at the possibility of having a face to it and hence approached RGV but it didn’t work out. So the project got stalled for some months and then I and Navdeep, whom I know from before, partnered and the idea also evolved a bit and then Rakesh joined us.

Rakesh – In this process when they were trying to have all the 24 crafts in one place, we realized that most filmmakers are done out there and have their pockets empty.  So we decided to target the writer’s belt first and then move on to the rest of them. My entire failures over different other productions or interactions with production houses, writers or from anywhere else were always been a pain point with being more organized. I was coming from a production like Just Yellow which is the only one to date which has a very organic approach to the craft. Also with writers, even the best of them don’t have bandwidth or time to pen down and their scripts are ghostwritten by a slightly larger team. And the teams are only paid and not credited for the work that is really done. The writers don’t even mind for not being credited for it as long as the execution is at par with what the writing actually deserves.

So trying to solve all these pain points is where we have evolved and come up with a certain model and it is going to evolve more.  The industry is people-centric and most of them, unlike other industries, are tend to be emotional. Taking an emotional angle to it and trying to secure them financially, emotionally and technically is the idea.

We have film schools here but why is there no pipeline from there into filmmakers who have actually become filmmakers? What are your thoughts on it?

Rakesh – See, when you have a more processed approach in the execution, it makes the whole process streamlined. Most people come from varied backgrounds, very few of them want to go to film school or even can afford them. Most of what is taught at any film school are available online. I can say we are looking for people who have the initiative to learn. We are still not equipped to give the kind of quality education we want to. Once we put out enough people and work out there to build an eco-system for ourselves, we want to foray into that. But that’s more like a long-term goal.

Pawan-- If you are asking about skill development, we are looking to have some workshops specific to the craft, but then having a curriculum is not something we have thought about yet.

So, if anyone wants to be a part of the workshops or get your expertise, how do they approach C-Space?

Rakesh-- We have an online portal on our website where a writer can send us a registered version of their log-line or script. If we like it, we assess his or her work to get an understanding of their learning curve and exposure. We then open a channel with them for correspondence and see where it can go. We are also looking to expand this process to DOPs, editors, actors, etc. to create an infrastructure for any creative talent out there. Once we have enough talent under our own roof, we don’t have to look elsewhere for talent, which allows us to do the whole creative production process in the house with certain contingency plans. This allows for there to be transparency and trust from the financing and creative side.

Rakesh-- We intend to take a very corporate and organized approach to film-making while working with the talent that is already here to hopefully make that the standard. This allows for there to financial security for both creators and financers, and that is our final goal.