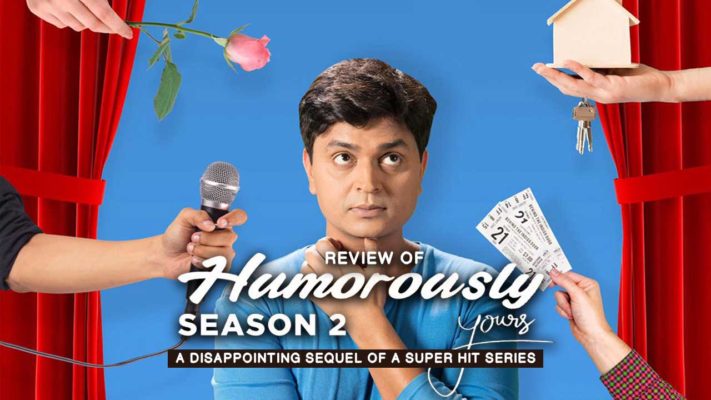 The Viral Fever (TVF), who has been creating web series back to back, has come with another series. This time it’s the second season of one of their successful shows, Humorously Yours. The first season of the show which was aired in 2016, was centered on what all trouble an upcoming standup comedian in India faces and what does it take to be successful in this profession. The first season which starred Vipul Goyal, Rasika Dugal and Abhishek Banerjee was an instant hit and was praised for its various elements, the biggest being its constant comedy.

Cut to, three years later, they have come back with another season and this time just with four episodes. Before we get into the details, I would like you to know that I am a big fan of Humorously Yours series and was on cloud nine when I got to know about the sequel. So, keep this in mind when you will be reading further, as I will keep mentioning the same. Since I am a fan I was looking forward to 7th June as the second season was supposed to stream on this date. All the excitement I had before watching the show, started melting down as I was watching the show. I was left disappointed after this season ended. So, let’s try to understand what all didn’t work in this season and break down the factors which affected it.

Not A Series, But A Sitcom

The first season of Humorously Yours had a gripping story and proper character arcs painted with extraordinary comedy in the foreground.  In season 2, to put it blatantly, the makers went with creating different moments rather than an overall story. I mean, in season 1 there was a proper story that of Vipul Goyal, an aspiring standup comedian wanting to make it big in the standup comedy circuit. And it was shaped by a tangible goal that is the protagonist wanted to have a ‘sold out special’. But in this season there was no such bigger story and I felt I had nothing to root for. Although I am a fan of the show and hence went ahead with binge-watching the series, there was nothing substantial on offer for me and I started detaching from the show instantly.

Similar to sitcoms, the second season had a new situation/challenge every episode. And sadly these individual stories weren’t enough to keep me hooked. The makers had some moments through which they were taking the series forward and most of the time, the scenes or the characters’ reaction was forcing its way to those moments inorganically. Yes, there were some moments that were outstanding, but they were few and far in between.

Another factor which didn’t help the cause is COMEDY! Humorously Yours was all about how good they were in infusing comedy in tense situations or how they would surprise you with their interesting comedic moments. That lacked in the second season. Excluding three or four jokes, I hardly smiled, leave alone laugh. It kept getting boring and despite it crossing my saturation point, I went through the torture of finishing the series. I just can’t believe, I am using such words to describe a show which I loved!

Positives In This Sinking Ship

The biggest take away from the season 2 is the acting of all the three leads, Vipul Goyal, Rasika Dugal, and Abhishek Banerjee, who were impressive in the first season as well. Abhishek Banerjee, in particular, is excellent with his portrayal of Bhushi. Most of the time, Bhushi’s quirks, unpredictable nature, and random logic gave comic relief and was soothing to watch. Vipul Goyal, playing himself on screen is on point and looks convincing in the problems he is stuck in. Rasika Dugal, who is a wonderful actress, reprises the role of Vipul’s on-screen wife Kavya. She does a splendid job in making one believe the bittersweet relationship of a husband and wife. Her screen persona is satisfying to watch and leaves a strong mark behind.

I was surprised by Anupriya Goenka’s performance of the character Devika. She is just incredible, has a strong screen presence and will make you hooked with her craft. It’s amazing to see such talent and the strong impact she created in an otherwise dull affair.

As usual, the production was good, the visuals were crisp and soft and the direction by Deepak Kumar Mishra was decent. Once again the music was top notch and on most occasions fitted well in the situations and elevated the mood and emotions required.

All in all, as a huge fan of the show, I was left disappointed. Despite forcing myself not to feel bad, I was truly let down. Ending my thoughts with a phrase that I feel sums up the second season of the show…

Not So Humorously Yours…