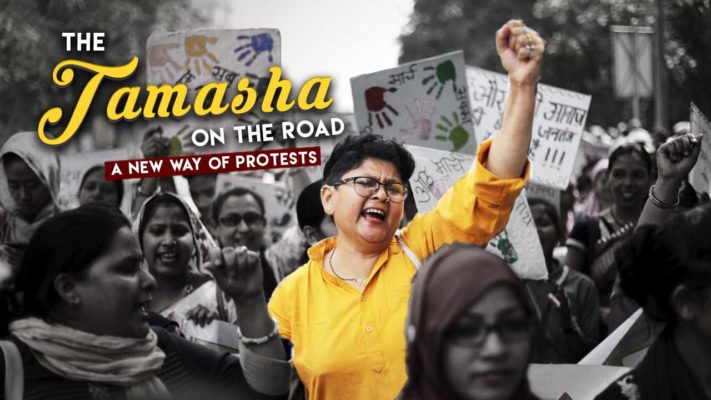 Twitterati, academicians, authors, and poets storming over the issue of polarisation and hate politics could not save the sinking ship. Liberal discourse saturated by political jargons remains for the privileged few who can afford to skip a day at work, sit in an air-conditioned auditorium or get through a prestigious university that promulgates against fascism giving voice to dissent. This cultural elitism has killed democracy besides breeding flawed opinions, and fuelling the widespread indifference that people have in general harboured towards liberalism. Today, India has slid far away from democracy and has gnawed at her own liberal foundations, pushing it towards further ambiguity and irrelevance.

No constructive criticism has been forged out of it, and we have only seen the proliferation of the likes of “khan market gang”. At this juncture, should we not think of other viable alternatives to comedy shows to replete with leitmotifs or astute talk sessions? The hoity-toity around liberal values has created an ugly fissure that is imminent with more anarchy; street theatre can beautifully fill up this void!

Street Theatre- A Moment Of Freedom

An alternative to these platforms that have gone partially out of touch with the people of the land might be street theatre, its effect pronounced by light limericks, tamasha, nautanki, and pantomime. This would to some extent emerge a new dialogue helping public retain their voice of dissent in times of authoritarianism, rather than placidly giving in to leaders’ fascist impulses. Why haven’t we tried to bring back the cathartic effect of street theatre back into our lives? Cho Ramaswamy, playwright and founder of Tughlak, once remarked, “Aiyya, why throw raw eggs at me when you can make me an omelette?” unperturbed by the insolence of throwing eggs to smear his Brahmin status. Ramaswamy’s remark erupted into a deafening roar of laughter and I believe, such a liberal stance undeviating in its approach should be able to resonate within thousands across states, shattering demographic differences.

Street theatre need not be explicit or extravagant in its execution, rather should display a commendable honesty to its identity, moulding itself with various theatrical components wrought in common man’s language- lucid, vivacious and identifiable. In an era when we are mournfully marching and denouncing the dystopia we are living in, what could be more cathartic than plain nautanki on the Indian streets?

People’s Fondness For Tamasha And Nautanki

Poetic cadence infested into the ordinary and its powers to reach out to millions has been overlooked until now. We, the privileged few, tend to forget the wide disparity between us and our audience that has been widened by high voltage propaganda and majoritarianism. The mammoth task of getting heard cannot be accomplished by invoking a handful we know from our college days or book club circle. In this hullabaloo of celebrated public speakers or political commentators who appear on people’s media, half do not communicate in any regional language, and a majority of these events require a hefty amount to become accessible. Eloquence, comedy, and satire can indeed draw a massive response undoing the injustice of our myopic vision.

Tamasha or Tamashagir has its origin in Maharashtra which literally translates to “fun and frolicking” and needs a spectacular combination of dance, drama, and music to become complete. It can be performed anywhere with dexterity even without stage settings.  A country that is recuperating from casteist and communal violence, open theatre should be modest enough to enact in broad daylight the issues that have impaired its growth.

Theatre holds together the social fabric of a nation, and a finely tuned drama would do a laudable job at it! Nautanki opera, one of the celebrated forms of performative art is known for its audacious take on subjects ranging from folk tales to contemporary developments. The dramatic elements of these two forms can be intertwined evenly to produce a storyline reminiscent of stalwarts Mahesh Dattani, Safdar Hashmi, and Rakesh Saxena; it must be more subtle in tone to create a powerful impact on people’s imagination without getting blue-penciled from the public sphere.

Why Theatrical Hustle Now More Than Ever?

Democracy can be revived right in the spotlight without taking recourse to ornate languages and Twitter. In perilous times when democratically elected leaders are taking immense pride in flouting constitutional rules, the street theatre could shed some light on how our liberal values are cudgeled on a daily basis.  Practically it can get expensive and elaborate in implementation, but why not follow maestro Hashmi’s footsteps?

–“If we can’t take big plays to the people, we’ll take small plays.”

The idea is to perform, entertain, and comment apropos of the current political air without using unnecessary abstractions and literary meters. Public spaces for the open street theatres should act as a vanguard of democracy and in no way should these spaces disappear into cloistered air-conditioned auditoriums.