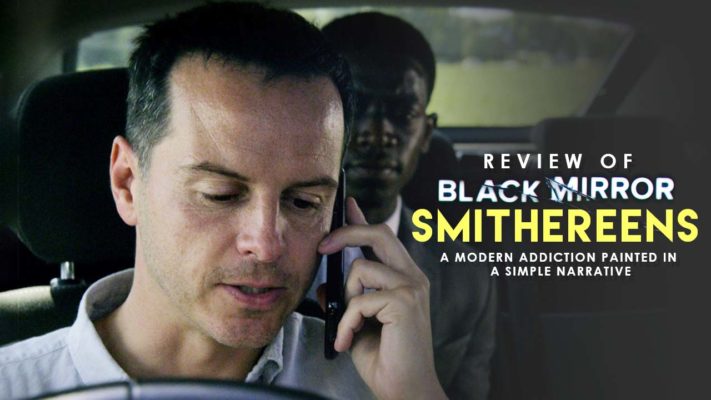 Black Mirror Is Back

Netflix’s Black Mirror is back with another series of stories. This time it has come with just three episodes – Striking Vipers, Smithereens and Rachael, Jack and Ashley Too. I watched the second episode, Smithereens and was blown away by the idea of it. Black Mirror has a reputation of messing up with our minds with their mind-boggling stories and make us question our lifestyle. Smithereens is no exception. So without any delay, let’s delve into the episode and understand the layers, pros, and cons in it. P.S. SPOILERS AHEAD!

Story Within And Around Us

The story basically is about a Cab driver Christopher, who kidnaps a young guy Jaden, who works as an intern in a social media company called Smithereens. Unfortunately for Chris, a couple of cops starts tailing him and soon he ends up getting the attention of all the cops and people all over the social media. Christopher’s only desire is that he just wants to talk to the founder and CEO of Smithereens, Billy Bauer.

Although the story looks pretty straight forward, there is much more to it. The protagonist in this episode, that is Chris, is this guy who is frustrated and angry on the people around him, who are glued to their phones and various social media platforms.  He has lost someone dear to him because of the social media addiction and that has made him realize and question the lifestyle everyone is living in.

Although the story pans out in a straight forward narrative and gets predictable after a while, the intentions behind telling the story are completely unimaginable. This episode will move you and will leave you questioning yourself after you finish watching it.

The stories in the Black Mirror series have always questioned society and its way of living. Most of them deal with either a dystopian saga with technology in its focus or an alternate reality of our current world. But with Smithereens, the creators have wrapped a contemporary issue lying in today’s world in a fictional story, which can happen to anyone of us.

In this story, Smithereens, the writer Charlie Brooker questions how the different social media platforms have made us its slaves and how we are not able to live even for ten seconds without checking our social media accounts. We are so addicted to these platforms that our whole life is driven by the sound of notifications from them and a quest for constant validation between the pictures, likes, and comments. Now, if you look carefully, the points I mentioned above, has a very thin line between the story and the real world. For once you will feel guilty about the same mentioned above. And that is the whole point behind the second episode of Black Mirror season 5, Smithereens. The Importance Of This Story

In the current scenario we are living in, we rely heavily on social media platforms for various needs. From talking to someone, check out the events, posting updates about us and stalking people, social media has become like oxygen to us. Even when we are out with our friends or in any social event, most of the time we are engrossed in our mobile phones. This is exactly what the creators of Smithereens try to highlight and convey a strong message of where this dependency on these platforms can lead us.

The makers smartly question us about the cost we might have to pay, thanks to this dangerous addiction. They point out our over-dependence on social media literally for everything and how we live more in the virtual world than the real one. And that is what makes this story relevant and so important to be told right now.

Another aspect that I loved about Smithereens is that they go with an ambiguous ending, never revealing the fate of the protagonist. You might wonder why they left us without answering our questions. Well, that’s the point they are trying to make. Throughout the second part of the story, everyone is following Chris’ story on social media and is hooked to their phones to know more about it. But, in the end, whatever happens to Chris, they just move on with their lives without even spending a fraction of second thinking about him. That’s exactly how the world of social media works. The story completely operates on a metaphysical level and forces us to question our reality.

Although I felt the pace of the episode starts to slow down in between, I can understand that the makers were focused on the metaphysical thought process.

Andrew Scott as Christopher steals the show and nails the role he plays. He is outstanding in playing this vulnerable, volatile and emotional character. The anger and the frustration Chris has, Andrew portrays earnestly and convinces us to understand what the character might be going through. In one sequence, Andrew manages to blow your mind with a rant which will leave you scared and worried for Chris.

Damson Idris as Jaden plays the perfect fiddle to Andrew and manages to leave an impression with his remarkable screen presence. The ever so talented Topher Grace, despite having comparatively less screen time, does a splendid job in portraying the role of Billy Bauer.

The director, James Hawes impresses with the visual storytelling and manages to stay the viewer hooked through almost the whole story. I particularly liked the cinematography as there were some scenes which were superb. For example, when Chris decides to change the route and kidnaps Jaden, we see the frame flipped from a drone shot. That was beautiful and interesting to see. The background music blends well with the story and elevates it whenever needed. Although special mention to the songs they choose to play when Chris is holding on the line. That was brilliant.

Rarely there are stories that are thought-provoking and Smithereens is definitely one of them. After you finish watching this you will be left thinking about the story for a long time. I urge you to watch this episode if you haven’t and enjoy one of its kind of story.