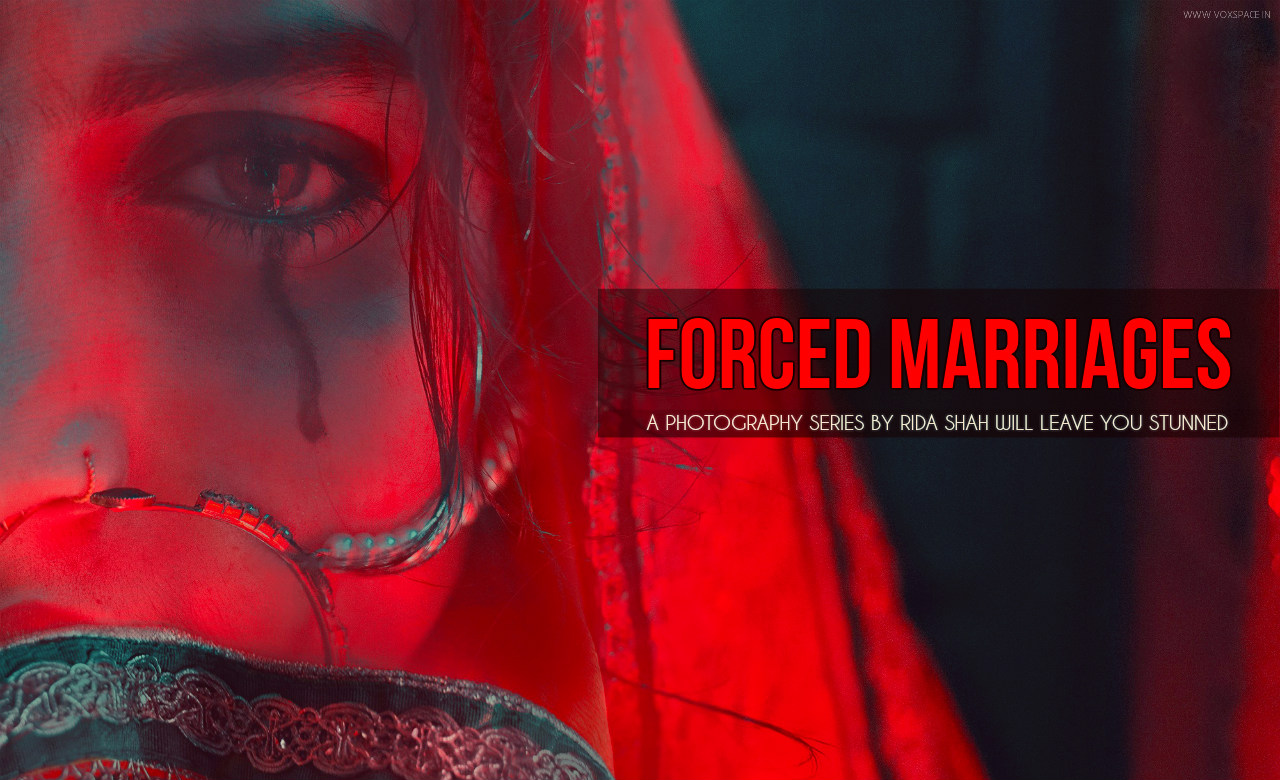 The Brutal Voice Which Resonates In The Photography Through Time And Culture:

I could say that the photography series you are about to see is creatively eloquent or stunning. Yes, they are that, but when you look at them for a while, they strike a chord inside your heart, which is undeniable and wrenching. The Photography series by Pakistan based photographer and artist Rida Shah will make you understand what our society offers in the name of customs and traditions of marriages. The inclusions made in stunning detail, hold a mirror to the atrocities inflicted upon womanhood, especially when the concept of marriage arises. Thus, it shows what civilisation becomes when it lets go of its basic sensibilities.

The photography series touches upon the subject of forced marriage. You can see that via the six works, Rida Shah brings about the issues of non-consensual marriage, forced living, marital rape and more. The hues of reds and black make you sit up and take notice. The Photography works are unabashed, brutal and right onto you from the word go. What choices do the women have in a society filled with misogynistic ideology? What does she stand for when nothing goes her way? When her word holds no weight and becomes a burden of pathetic revolution? What happens when we overlook the meaning of a woman’s life.

The Woman Behind The Photography Series, Speaks For It:

“In this so called Islamic society of ours, it’s surprising how so many false and unfair practices are followed even by our most educated families. One of those is forcing your child to marry someone absolutely without their consent.
‘Abhe nae pasnd tou kia hua, aik bar nikkah krdo sb theek hojaega.’ (So what if you don’t like him now, Once you get married everything will be alright)
‘Bacha hai tou kia hua, prhae likhae shadi k bad krlega’ (It doesn’t matter if its a kid..Marriage will make them grow up)
And the list goes on and on.I completely respect the fact that parents have the right to ‘suggest’ their children who they should marry and who they shouldnt, but Islam does NOT give them the right to take this decision all by themselves, specially when their child isnt willing to.
It is estimated that 21% of girls in Pakistan are forcely married before the age of 18.
These marriages either end up in divorces or children blaming their parents all their life”.

She extends hope through her series and is optimistic that somewhere her works will show you the true meaning of female consent.

“I know it won’t end this practice, but at least it may convey the darker side of it and educate someone to take a step”, she says.