Draupadi – The Tale Of Polyandry That We All Felicitated But Long Forgot Only To Call It A Sin Now. 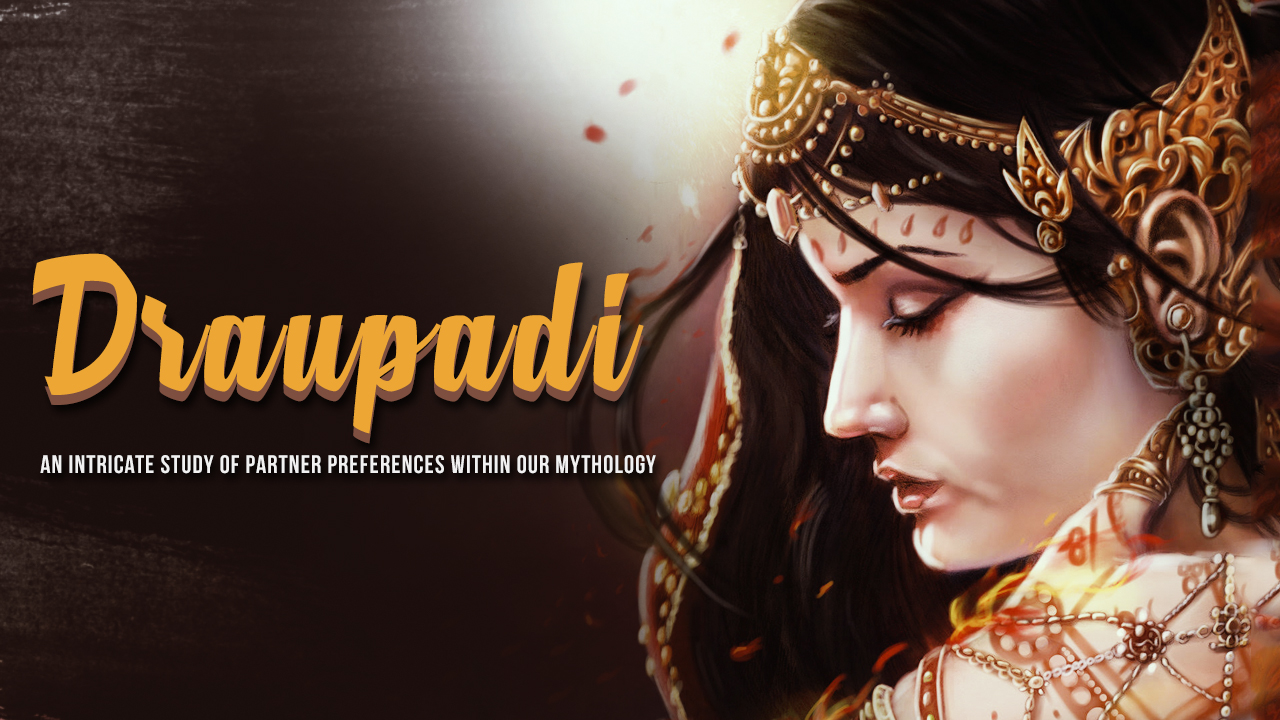 The Discussions Of The Mythological Polygamous Practises:

Him: What a bitch, right?

Me: Ahaan! What made you title her that?

Him: It’s as if she can’t get enough of one, she wants a second one too. What else do you call someone like that?

Me: Is it that simple?

Him: No? Are you saying that you can actually empathize with her being in love with two men, at the same time?

Me: Maybe. Maybe not.

Before starting to write about polygamy or say polyandry in specific, I would like to mention that the dictionary definition of Monogamy is the scenario where a person is married to one and Polygamy is where a person is married to many. Polyamory is the situation in which a person tends to be in love with more than a person. With India which has adopted marriage as a mandatory institutional practice for centuries and is now drifting a little away from the misconception that marriage is as important as oxygen, here, I would like to refer Monogamy and Polygamy as phenomena which focuses around being in relationship with one or many, either through marriage or through a love defined commitment.

Coming back to the square one, is Polyandry or say Polyamory, wrong? On what parameters do we define it as a sinful thing to be done? The modern day relationships are becoming complicated day by day. While it is a fact that three-thirds of the people who are being in love, share a one to one relationship; the rest one-third of the population is in chaotic relationships that involve more than one people be it one man with two women, one woman with two men and then there is a third level, referred as an open relationship where either of the partners can have sex with others, but stay in love with each other. The Tale Of Draupadi And The Fruit Shared By Five Warrior Brothers:

The tale of Mahabharata is where we have seen one of the earliest polyandry cases where a woman is married to five men. The story of Draupadi who got married to the Pandavas has been well read and accepted as mythology. Even if it said that Drapaudi hasn’t had the intention of the union, it was Kunti who created a situation where she ended up having five husbands instead of Arjuna. Digging deep into the marriage between the Pandavas and Draupadi, certain norms were followed in a fraternal polyandry marriage, and the case is same with Draupadi.  It is said that the eldest brother gets to marry the bride in the first place and the other brothers join the marriage consecutively.

The wife, however, is supposed to be equal to all the brothers but the elder one has the decision making ability when it comes to her.

As a wife, Draupadi had to ensure that she gives the same sex life to all the brothers and the children of any brother should be treated as the children of all the brothers, irrespective of who the biological father is. The earning is shared between the brothers to well-maintain the family by the wife. When asked what the philosophy behind this was, some ancient scholars said that the younger brothers of a family are often considered as extensions of the elder brother. Therefore, when the wife gets married to the elder one, the other brothers join as extensions and the wife should see the picture of the elder one in, the younger brothers.

But, how far is it possible for women to be equally in love with all the brothers; when the contemporary society merely sighs at the idea of a woman being in love with two men. No, this is not gender specific, either. But in a patriarchal society, where men are allowed to do certain things and where women are judged for the same, how far is it possible? Both physically and psychologically? The Genesis of Polygamous Relationships – Where Does The Bible Fit In Here?

Going back to the genesis, the family tree of Adam and Eve, says that they had three children Cain, Abel, and Seth. According to the Bible, three of them are sons and if that is so, how did they give birth to Enoch and Enos without mating with Eve? Ain’t this a case of Polyandry involved incest and where down the line, did both of them become sins, even amongst the theists? For generations now, a fair story has been told to the anthropologist students about the social mating of one woman with two or more men. The Tibetan plateau contained around two dozen societies where polyandry existed as an accepted form of mating and is also referred as an anomaly of the mankind.

According to a research conducted by Katherine Starkweather of the University of Missouri, more than 53 societies even outside the Tibetan region allowed polyandrous unions.

Women who are involved in such practices are not tagged as cheaters by any far stretched imagination and neither the man titled as cuckolded. Rather than considering the polyandry as a mystery with specific reasons to be explained, many researchers suggest that they are formed out of evolutionary pair bonding based on environmental, physical and sometimes psychological conditions. If you observe the social practices, they often turn out to be erroneous because of a particular practice being extinct. And when it comes into the limelight after several years when no one actually practices it, the practice is termed as a sin. I believe that polyandry is one such phenomenon which no longer exists in the today society. At least that’s what we thought until we came across this story of modern day Drapaudi recently. Yes, Polyandry is still prevalent in some of the remote Himalayan Communities. The Contemporary Draupadi – The True Story Of Rajo Verma of Dehradun:

Rajo Verma, a woman who resides in the small village of Dehradun, has five husbands and a son. Rajo stands by the tradition of Draupadi as mentioned above where she sleeps with a brother, each night. The son who is 18 years old now, doesn’t seem to know his biological father because of the confusion arose in this. According to Rajo, she was asked to serve all the husbands as a part of the practice in their community and even her mother was married to three brothers. Rajo is intimate with all of them, and on agreeing with her first husband, Guddu Verma, she has married Bajju, Sant Ram, Gopal, and Dinesh where jealousy had never been an issue for them and that they all live like a happy family.

As much as it sounds like an alternative universe, the reason behind this tradition is the division of farm land over the generations resulting in owning little land even to feed the families. Therefore, by marrying a single woman, they collectively work and eat.

As the conversations go, not one of the people I have talked to has mentioned a cure for the heart’s schism, and all of them commonly said that one could be in love with two people at a time, given that they love each of them in a very different way. The Prevalence Of Polyandry In Our Society:

Esther, an advocate, has confessed that in the 7 years of her husband’s demise, she has been dating more than a person all the time. Iris, a mother of two children for 15 years, loved two people at a time and is involved with a man while being married to her husband and the husband supported it too. So, am I supporting the idea of Polyandry? No! Definitely not. But I don’t think anyone can help themselves to not be in love with two people at the time.

While the tale of Draupadi and Rajo has taught us that it is possible to make things work with potential lovers, it is because of the complications formed in the evolution of the human brains, all of us have started craving for the old fashioned love with the simplicity one, where happiness alone exists to fade out the other sorrows of the life.

It is hardly impossible to judge this phenomenon as right or wrong because of the emotions being exclusive and partially typical. Investing emotion in two different people requires a lot of energy and sometimes, the logical contradictions arise, talking about the romanticism. Therefore, loving two people at a time may not be entirely possible as love is based on the significant characteristics and if in possible cases, the two loves should be complementary rather than competitive. Another plausible case where loving two people in the modern day era is possible is when one of them is at an infant stage, and the other is at a very adult stage. This often creates an emotional dissonance between the three people that are involved in the relationship regarding partiality and exclusivity. When Did Draupadi Become A Symbol Of Sinful Practice:

Maybe this exactly is why the entire idea of polyandry has become a sin because of the pain it causes in a person while he imagines his lover being intimate with another person. This would become a difficulty over the period. However, as the modern day society is accelerating, several new norms have been accepted concerning romantic exclusivity to balance the emotional dissonance. We should indeed allow our spouses to have the freedom to form personal relationships with other humans irrespective of gender and be a little flexible when it comes to sex. In societies like India where extramarital sex is disapproved largely, and the transgressors are considered as sinners, the idea of parallel relationships is evolving where people are allowed to like two people at the same time.

Wrapping up, being with two people is torturing, exhausting, complicated and makes you a bitch to other people, given the society, today. While I can’t go back in time machine and interview women of the stone age who played around with men in the cave, there might be a plethora of experiences and that there is nothing called as an illicit love. While I’m entirely supporting the idea of polyandry, it depends on you whether you would be able to do it or not. The Final Thoughts On Inclusive Lives And Emotions: