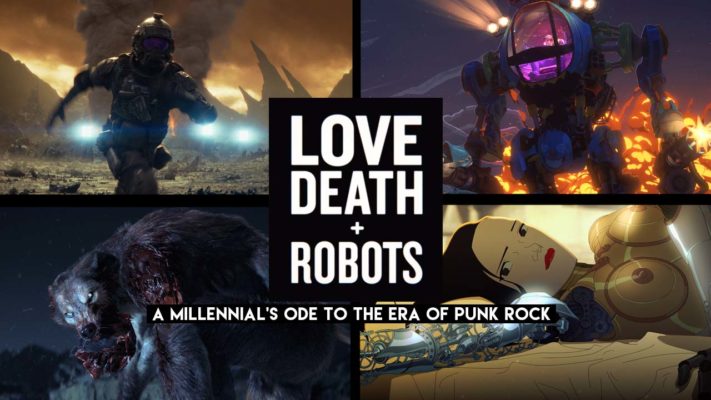 Netflix Does It Again

With the advent of streaming platforms, there is a constant inflow of content that is literally never-ending. When you have so many platforms, with each of them trying to get your attention, there is a positive and a negative impact on the produced content. Firstly, the negative- due to the constant inflow of movies and TV shows every week, the market gets flooded with shitty content. The positive is that only the best content rises to the top, it literally becomes a very highly merit-based system for an IP to work. In comes Netflix, while a lot of streaming platforms are creating and buying content, no one does it better than Netflix.

If you look at last year, their choice to buy Roma or making Bandersnatch with Charlie Booker, where they experimented with the very form of story-telling. They are always experimenting with their IPs to come up with new ways to disseminate stories. Their latest attempt at this was with Love, Death + Robots. Love, Death + Robots is an animated anthology show, ranging in time from 6 minutes being the shortest to 17 minutes being the longest.

Every story is animated using a different style, from 2D to anime to 3D to photo-realistic, depending on the intended effect. This gives the show a visual variety that is almost impossible to find anywhere else. There are a couple of stories that pop into my mind when I talk about this, The Witness and Ice Age.

The Witness uses Japanese anime as an aesthetic choice to show chaos through the streets of a futuristic city which seems like a mix of Tokyo and LA. The way each frame blends into the other increases the tension in this almost wordless foot chase, shocking you at every turn.

The latter deals with a couple who find a lost civilization in their refrigerator. For reals, that what happens. In this one, they blend animation with live-action a brilliant and still thematically relevant way.

The show has this very punk-rock aesthetic to the whole show. It is very tongue-in-cheek and deals with very heady sci-fi ideas in short durations with a great amount of panache. These stories are not genre specific, they range from comedy to cosmic horror to war drama to fantasy to cyber-punk with a slight hint of sci-fi thrown into each of them.

Each of the stories takes place in a fictional universe with its own rules. But they infuse these stories with themes related to our contemporary society, questioning our own perspective on the world. Which is something every sci-fi should aim to do. For example, in my favourite episode of the show Blue Zima, there is this idea regarding the search for the universal truth. It states that knowing everything is the same as knowing nothing. This thought hasn’t left me since I watched it.

The Perfect Show To Curb Your Cravings For Black Mirror

Coming to the people behind the show. Netflix has put together a group of brilliant animators and directors to bring the grand vision to life. See, the task was to make 18 shorts that looked and felt very different from each other but maintained quality control. To do this, Tim Miller, from Blur Studio, was made the show-runner and David Fincher the Executive producer. Which makes sense, as they have been trying to reboot the cult-classic Heavy Metal from a long time. The show also owes a huge debt of gratitude to the success of Black Mirror which revitalized the interest in sci-fi anthologies after Twilight Zone.

Just as a reminder, please do not watch this with your children. The show contains graphic nudity, extreme violence and constant cursing. This show is meant for a mature audience with a capital M.

Finally, if you are craving for truly original content loaded and brimming with style, this is the show to look out for.