[VoxSpace Selects] Unicorn Store: The Child Inside An Average Millennial 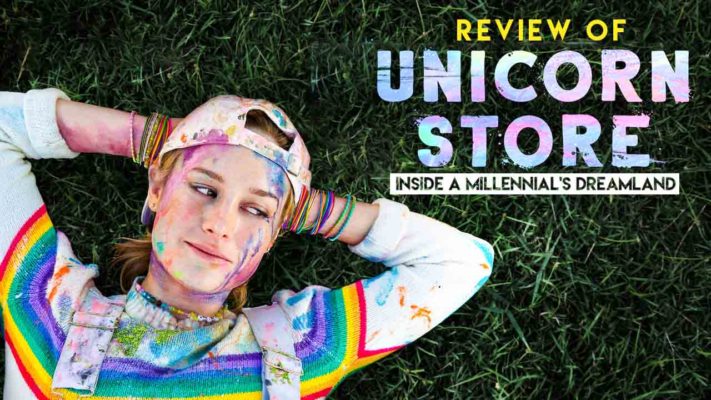 Just when we thought we couldn’t get over the cute pairing of Brie Larson and Samuel L Jackson in Captain Marvel, we are treated with another charming movie found right at the end of the rainbow, The Unicorn Store. Unicorn Store runs for a solid 92 mins. It is written by Samantha McIntyre and is directed by Brie Larson.

Although all that glitters is not gold, the glittery part is indeed the golden, cute moments on the screen. Unicorn Store is a jazzy story of an artist, failed at life. She never actually stops believing in the mythical and magical one-horned stallion. That which had given her an enchanting encounter when she was a young girl.

This childlike artist has quite an odd persona. She is a lover of sticking Bugles on her fingers, discussing with a closet of Care Bears and a palette of colors that hints an explosion at the starry Skittles factory. Although this movie predates Toronto Film Festival in 2017 and finally hit Netflix only now, it rekindled the sassy spark between Brie Larson and Samuel L Jackson effortlessly.

Inside A Millennial’s Dreamland

Unicorn Store is quite tacky with its underlying themes and production. Its rather adult yet fantastical approach branches into this potential entertainment for grown-ups. This starry dreamer, which can perhaps be dismissed as childlike and immature, can be taken as an adult dreamy plot that brings out the magic in us.

Its plot and premise become an argument for itself. The story deals with Kit, a temp who serves as a public relations agent, resigned to the cubicle. When she gets an invitation from “The Store”, a secret, mysterious operation run by a secret, mysterious person, akin to Willy Wonka, played by L Jackson, who offers to sell whatever she wants, Kit ends up asking for the mythical one-horned stallion, a unicorn.

We see Kit become a child when she begins to build this home-made stable for the Unicorn. We also see this crude relationship between the spectral iconoclasm and the rather conservative, rigid middle-aged denizen which keeps pulling her back into the endless void of temp work and swilling coffee. What the movie subtly hints at is that there is no single fit for all adults to be adultlike in society. Each has their own take.

Although the movie garnered mixed responses from critics, there is a lot to take away than what meets the eye. Larson, playing that confused millennial also does a smooth job of appealing to the inner child within all of us. The comedy/drama subtly lays out the point that the road lying ahead is different for each of us. The story sometimes flirts with some cringe-worthy content but again focuses on the larger than (adult) life aspects.

Larson, along with Samuel L Jackson makes a promising duo for a comedy/ drama film. The movie didn’t really hit off with most people. But Larson has shown more than enough talent with her take on directing and acting in the comedy. If we are lucky enough, we may see more of Larson/Jackson playing even more fun roles in cinema.