Posted on September 13, 2019 by Srividya Vanamamalai 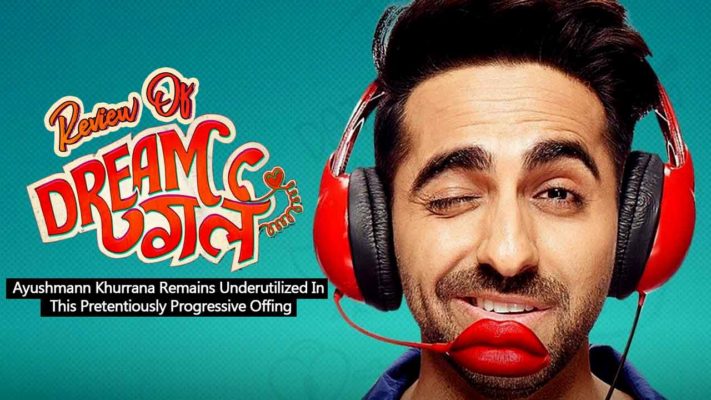 The National award-winning actor, Ayushmann Khurrana is riding high on fame for his content-driven films like Badhaai Ho, Article 15 and Andhadhun. Usually popular for choosing premises that are experimental and unconventional, Ayushmann has come up with another unique premise in Dream Girl, this September weekend.

The film marks the directing debut of writer Raaj Shaandilyaa who holds a record in the Limca Book of Records for having written 625 scripts for TV and film. He is known for writing amazing comedy scripts and was expected to deliver a laugh out loud film, but unfortunately that is not how it pans out. Let’s try to understand the film more and see check out the factors that didn’t work in this film.

An Entertaining Premise That Fails To Tap Its Potential Value

Ayushmann Khurrana, who plays Karamveer Singh, is blessed with a gift- impersonating a feminine voice. His father (Annu Kapoor) is in huge debt, owing money to various banks, solely betting on the income from his small business in Haryana town. Annu Kapoor owning a pooja store is very symbolic of the pseudo name Ayushmann uses later on in the film. Karamveer is tempted by a high paying job offer at a shopping complex and discovers a phone sex call centre behind the doors of a “Bijli” electrical store owned by Rajesh Sharma. He is more than willing to join, despite his insecure feelings to use this skill during the festive performances of Raasleela and Ramleela. The first half revolves the various perks of a middle-class young man who lives dual lives, Karam and Pooja, becoming privileged in terms of attention, luxury and a love life. This is when the dull Nushrat Bharucha enters the “screenplay” as a love interest, who surprisingly turns a feminist in the end and is reserved purely for dialogues and love montages. Despite trying hard, the writers run out of jokes thanks to half-baked characters and some inorganic silly situations, as we reach the interval. For example, the desperation of the five love-struck characters to meet Pooja fizzes out faster than Coca-Cola.

The Plotline Is Predictable And Is Cautious Of Sounding Pseudo

The second half opens with the intermission “plot” twist and succumbs mostly to lazy and overstretched sequences with promising actors. Annu Kapoor, Vijay Raaz and Abhishek Banerjee are reduced to mere caricatures and lack depth in both, the character they play and their dialogues. Abhishek Banerjee (Stree fame) and Vijay Raaz (Gully Boy, Dedh Ishqiya), in particular have hollow characters for someone who possess tons of talent. Unfortunately, because of the average context, dull scenes and stereotypical jokes, there was nothing to showcase their acting prowess. Manjot Singh who plays Smiley, Karamveer’s friend, lands his jokes right and his consistent energy throughout the film is a delight to watch despite limited content. Certain conversation regarding inter-community marriages, importance of trust in a relationship come across to sound demeaning, irrelevant and make-believe.

The film’s overall look in the aspects of production design and casting is full of promise but leaves you disheartened/unfulfilled with average jokes, slow paced screenplay and over-the-surface preaching.

Ayushmann Is Formulating A Character Checklist

Ayushmann seems to be forming a character template of his own- An average middle class “mard” who stands against societal odds, rise above his flaws. overcoming the problems plaguing the common underprivileged man. Some of the sleazy dialogues points out the obvious but unspoken truth in today’s millennials, which surprisingly I could relate to. There is a line that explains the loneliness faced by the current generation which hugely relies on social media as an escapade for attention and ignore the value of companionship and love. Despite its flaws, Dream girl entirely depends on Ayushmann’s charm and persona that keeps this pretentious romantic comedy afloat.

The music by Meet Bros is a big disappointment and is unnecessarily peppy which the story does not require in the first place. The sound design is flippant and irrelevant which can get irritating sometimes. The story hardly does justice to its title- Dream girl, a direct reference to actress, Hema Malini. In fact, Dream girl is reminiscent of Chachi 420 in terms of premise and cast but ends on a preachy note due to the clichéd writing. Dream girl is unauthentic and almost makes you laugh but not fulfilling enough.

Dream girl is watchable for its cast and interesting premise but refrain from high expectations and hopes of a true entertainer.