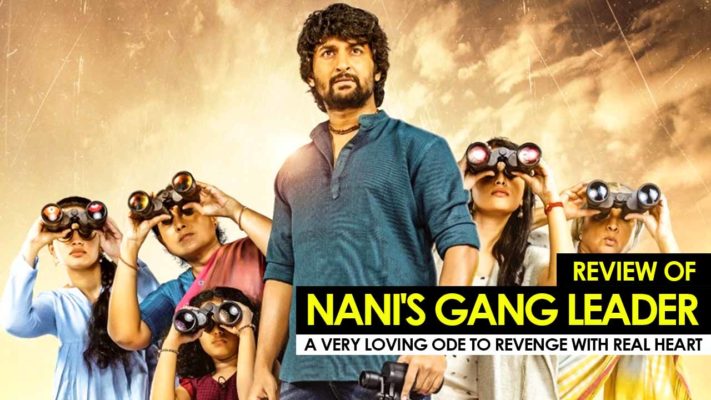 Nani Is On A Winning Streak Again

The verdict is in, the recent trend of uber-cool new age Telugu films that have been coming out is not a fluke. It is a real and very evident trend and a true treat to behold. Filmmakers new and old are working tirelessly on their scripts and presentation skills to collectively increase the quality of cinema being put out. The recent addition to this pool is Nani’s Gang Leader directed by Vikram Kumar. The film is a meta self-referential story about revenge which constantly references other films from the genre, in the vein of the Edgar Wright’s cornetto trilogy or the irreverent masterpieces of Mel Brooks. The thing that the film gets right like the aforementioned films, is that the references alone cannot make the film work. It needs to have characters or a plot as good as the films it is referencing.

The film takes no time to jump right into the plot. The film opens with a Dark Knightesque heist sequence that leads into a chase which ends with the mysterious antagonist vanishing into the night but leaving behind a trail of dead bodies including 5 of his own team members. The women who are related to these men in various capacities, such as a grandmother, mother, fiancée, sister, and daughter seek vengeance. In this quest for revenge, they seek the help of a pretentious failing novelist Pencil Parthasarathy and thus begins the cat and mouse between the gang and the evil bad guy. While the plot does not seem oh so original. The film wins because of how the story plays out and the very well-realized characters in the gang.

If the characters in the film behave in a way that feels real to us from an emotional perspective or if I can relate to them, I tend to overlook the liberties the filmmakers take regarding logic. It’s only when the characters don’t feel tangible or organic, I start looking at the film in a more clinical way. This is where the filmmakers really succeed, while there are moments where it can get a little predictable and way too convenient, you look past it because the payoff is so good. There was this moment in the third act for example, where veteran actor Laxmi’s character reveals something to the audience. I saw it coming from a mile away and it seemed a little farfetched, but it was performed, shot and scored so well that I got lost in the moment and even teared up.

Plays to the strengths of Nani and Karthikeya

Nani is pure gold in the film. He is earnest, smart, vulnerable, misunderstood, stupid and dependable at various points in the film and he pulls it off with kind of charm that seems effortless. Especially his interactions with the recently orphaned kid choked me up multiple times throughout the film. Casting Karthikeya as the two-faced yet menacing race car driver is brilliant. As the film is playing at a heightened kind of reality, his over the top evil performance only adds to the film. While, I agree his acting range could be more expansive, as he plays the same character as his RX100’s Shiva, but richer. He perfectly fits in the slot made for him, so I can’t complain.

The Gang Is Gangbusters…

Coming to the gang, they also seemed very well cast and they did their jobs perfectly. The two mother figures Laxmi Garu and Saranya Ponvannan bring a kind of maternal grace to their characters which adds to the gravity of the tragic situation. Priyanka Arulmohan who plays a heartbroken lover is very good at not overplaying her role but emotes all her pain just through her sunken eyes. She is also very good as the love interest too in the latter half of the film. The girl who plays the orphaned sister is passable as she does not have a lot of screen time. The scene-stealer here is the little kid, I hope she is cast in a lot more films to come. She seems wiser beyond her years, which adds the depth of her pain.

My Personal Issue With The Film

The only thing I had a clear issue with, in the film is the Vennela Kishore character. While I have no problems with the actor himself, I could not help but cringe at the homophobia at display through his character. The effeminate way that he behaves, his predatory tendencies and the constant creepiness attributed to him. I mostly put that on the writing team, and I don’t want to attribute any intentions to them. But, come on guys, we should be past this by now. Inclusion does not mean laughing at the other.

When Vision And Execution Meet…

Here, this works perfectly. The production design by Rajeevan and the art direction by Ram Kumar and Supriya look so lush and detailed that you forget very early in the film that this is all a set. Especially, Nani’s home and Karthikeya’s garage look super textured and sleek respectively. The cinematographer Miroslaw Brozek enhances the look of the film to new heights by his smooth camera movements, picture-perfect frames and beautifully orchestrated streaks of light. A highlight in this department is the pre-interval sequence which ends with an amazing visual reference to Mahabharata, which I don’t want to spoil.

Anirudh And The Sound Design…

I have always been told that the job of the sound department is done well when you don’t even notice it. This is true of this film. Many films overlook this aspect and it leads to the audience being pulled out of the experience. Varun Venugopal, who has contributed to films like Brochevarevarura and Ee Nagaraniki Emaindi, works his magic here as the designer. Finally, we come to the soul of the film, the music. I don’t even have words left anymore. It was just pure magic. Anirudh outdoes himself again, especially the antagonist’s theme and Hoyna song are real standouts. Hope this winning combination of Anirudh and Nani continues.

While the film falters slightly in the third act as it reaches its climax, the awe-inspiring visuals and the heartfelt performances make up for it. The film succeeds at emotionally engaging you, while at the same time not taking itself too seriously. I really commend the film for that. Go out there catch this movie with your loved ones, it’s a truly communal experience.