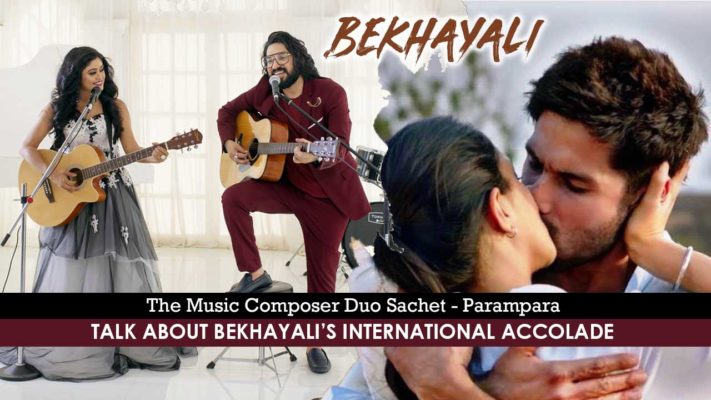 Most of us are still in the hangover of the amazing song ‘Bekhayali’ from Kabir Singh. It is one of the biggest songs this year and has redefined the purest form of love in a simple yet relatable way. The people behind creating this masterpiece is the incredibly talented duo – Sachet Tandon and Parampara Thakur. The duo who has given music for movies like Toilet: Ek Prem Katha, Batti Gul Meter Chalu and Kabir Singh, has given quite a few hit tracks in their career so far. The duo, which composes the music, writes the lyrics and also sings, has been enjoying the success of ‘Bekhayali’ song. Recently, it was announced that Sachet and Parampara will be receiving international accolades for their record-smashing song ‘Bekhayali’. Below is the official press note released in regards to the above information mentioned. Honour At An International Stage…

The fantastic duo Sachet- Parampara has made their way to the hearts of many fans with their blockbuster songs. Not a lot of newcomers can claim to have tasted fame in such a short time, the duo, however, is already a household name in the music industry and have worked with all the best people in the industry. Sachet and Parampara’s recent hit song ‘Bekhayali’ has garnered staggering 100 million views and the duo is all set to enthrall the audience in Dubai.

The duo will be honored for ‘Best Song Of The Year’ at an international platform (SAWE) India International Excellence Awards 2019 scheduled to take place on September 13th and 14th in Dubai. Sachet and Parampara will be performing at the award evening, the show will witness the presence of celebrities like Anil Kapoor and Chitrangada Singh along with other dignitaries. It looks like there’s no stopping for ‘Bekhayali’ and ‘Mere Sohneya’ composers.

Talking about this achievement, Sachet-Parampara adds, ‘We feel extremely happy as this is going to be our first award. It is a really different feeling as Bekhayali fever is still going on and received endless love for it.  We are thankful to the entire team and every listener for making it reach 160+ million views on the song. It is a proud feeling to represent our nation at such a prestigious award show and indeed an honour to perform in Dubai among all other big achievers of the night. We want to thank SAWE for making us a part of their grand gala-nigh’. Together, the duo has created soundtracks for several iconic Indian movies. They are going forward with leaps and bounce and the kind of potential they have shown, I believe we are in for some soulful, calm and peaceful music. Their next project is ‘Pal Pal Dil Ke Paas’, which is already making a lot of buzz with its songs, especially the title track, beautifully sung by Arijit Singh and Parampara Thakur. We wish them all the best for their future endeavor and hope that they will keep creating magic with their work in their future projects. Cheers.