VoxTalks With Justin Prabhakaran : A Master Of The New Age Melodies 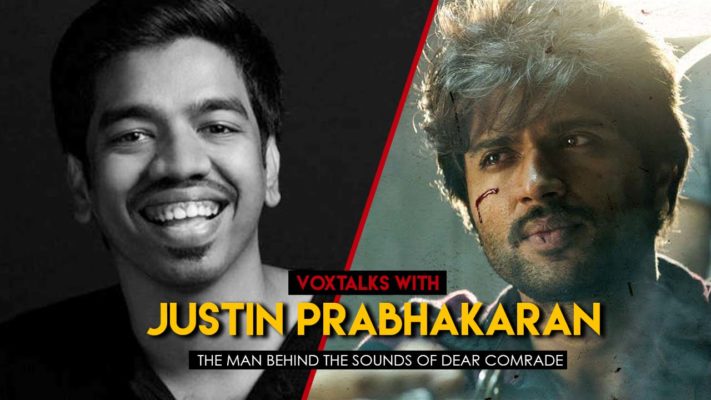 Justin Prabhakaran has shown enormous promise as a composer. After debuting five years ago with Pannaiyarum Padminiyum, and having delivered hit songs in films like Oru Naal Koothu and Kaala Koothu, the young music director has grown from strength to strength. His recent chart-topping album for the movie Dear Comrade has put him up there with the best of the best. The music was simultaneously put out in all four South Indian languages to critical acclaim. We had a small talk with him about his process and techniques. Here are some excerpts from the conversation.

Dear Comrade marks your debut in Telugu. How did that happen?

I knew Director Bharat Kamma since 2012. We had previously collaborated on a short film called, “Maro Prapancham” in 2013. We had a good working relationship and loved the output. Bharat is very creative and a very smart collaborator. He had to go through a lot and had to sacrifice a lot to get Dear Comrade made. Through all of that, he stuck with us technicians. It was me, Sujith, the cinematographer and Sreejith, the editor.  That’s how dear Comrade happened. Because of our friendship, we have a good wavelength which made Dear Comrade album so successful.

What determines the success of a song or album in today’s cinema?

I believe three things play a vital role. A good tune, which enhances the mood of the song and the moment. Lyrics, because the music needs to be accompanied by poetry to bring the inner poetry of a situation to the forefront and make it more evident. Thirdly, the singer. You need to find the right voice to put everything together. Overall if the tune, lyrics and singer sync perfectly, you have a great song on your hand. All these calculations are great, but once you are in the studio, its just pure magic.

Do you prefer composing songs or scoring to scenes(BGM)?

Both are very different. While you are composing a song, you need to keep the visuals of the film in mind, which most directors explain very well. But, while scoring, you have the visuals already and you need to tap into the emotionality of the scene. I love both processes, but I like scoring for the film a little more exciting.

What’s been your most challenging song or scene to compose for so far?

That definitely has to be the song, “Eppo Varuvaaro”, from the movie “Oru Naal Koothu”. The song was more than 120 years old and composed by the brilliant Gopalakrishna Bharathi. It is such a gorgeous and divine composition. The director, Nelson Venkatesan, asked me to keep the lyrics but change the tune. He always comes up with these kinds of innovative ideas and fresh thoughts. That is why I always like working with him. When I finally saw the visuals, I was awestruck by the visual poetry that he created on screen.  So, we had to approach it very sensibly and carefully. This took almost a week, but we finally cracked it. Haricharan provided the vocals and I am very proud of the output.

What is your relationship with your director? When do you know you have got what you guys were striving for?

Basically making a movie is teamwork. So, we have to be open up our mind to all kinds of suggestions and criticisms. I take in every suggestion and work on my piece with them in mind. If I feel something is not going right, I just come out and say it. Finally, good music will come only when there is mutual trust between the director and the composer. Fortunately, most of the directors I have worked with understood that very well. In my department, nobody solely takes responsibility for any piece of music, including me. Because everyone is indisposable, and every one of them has a part in making the whole piece that good.

You have worked in multiple languages. Does your process differ in any way? If so how?

Music is an art which conveys emotion through sounds. So, when stripped of all the frills, music is essentially universal. We just have to infuse a bit of the local flair into the music, depending on the location and culture. So, in Dear Comrade, I tried small changes in instrumentation, which would work for all four states. I love listening to music from various cultures. When I do that, I feel like I can take in some of the essence of the culture. This allows me to not be stuck in a loop creatively.

Who has been a singer you have enjoyed the most recording a song?

I have a long list of favorite singers. I fall in love with each of their voices during recording, because I am always the first audience to experience it. If I or director don’t enjoy with voice, we will normally swap them out for someone who would suit better.  Sometimes it doesn’t mean the singer is bad, but their voice would not be suitable for the song. So, it all depends on the song.

Growing up, which composer’s works did you listen to?

The legends themselves, Ilaya Raja sir and A R Rahman sir.

Give us a few scenes or songs that you were most impressed by musically?

I love most of the work from these legends. But these albums and the BGM from these movies are absolute gold: