VoxTalks With Adarsh Eshwarappa : The Importance Of Perseverance For Achieving Success In The Film Industry 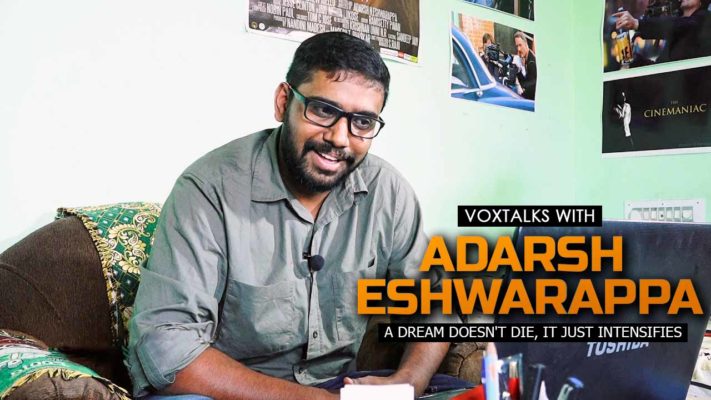 Adarsh Eshwarappa : A Man Who Stuck With His Dreams Come What May

A lot of us have dreams, but how many of us really go after them and how many of have the follow-through to take it all the way to the finish line. Our subject for today is one such man, Adarsh Eshwarappa. It took 12 years for him to make his first film (Shuddhi). He managed to get through this time doing jobs he was not interested in, just keeping his dream in mind. We had the privilege to sit down with him to talk about his journey and his upcoming project Bhinna. Here are some excerpts from that conversation.

So the first thing I wanted to ask you is. I read that it took almost 12 years for you to get to Shuddhi right?

Let’s see. It started back in my college days. So, I was being active in cultural activities from a very young age. I mean, I used to be a dance choreographer in the college. There was this big competition, where, you know, we got disqualified, that was like a huge heartbreak to all of us, which kind of led me to think about what I was supposed to do in life and think about it seriously. That was the moment where I decided that this is what I want in life, which is to be in films, as a director, it was not an instant thing. And when I look back now, I see that I had an inclination towards films from my childhood, but I didn’t know what I would become in films. Like, would I become an actor or director or an editor or any other role, you know.

So, the clarity came to me when that thing happened when we lost the competition. Because choreography is very similar to direction, where you also must manage people and get work out of them, which is what the director also does in a film. So yeah, that was the point where it happened from there. The first step I took was to get a BPO job, which was a very unusual decision for an engineer. It was a conscious decision because I wanted to be in night shift so that I would have more time for preparing to become a filmmaker. So, every step I took from there on was just about realizing my dream. So, there was no looking back. There was not a single moment where I doubted myself. I never gave myself to ask questions like, what if it doesn’t work out? What will happen to my future? It was just about looking forward and just to keep going.

So, about your new project Bhinna, firstly congratulations. The motion poster looks cool. How did that come to be and how was your experience in terms of the shoot?

With Bhinna I got a lot of freedom. Bhinna is not very mainstream, it’s against the commercial formula of the industry. It is more complicated than should be with respect to the screenplay of the film. There are no songs or separate comedy tracks and stuff like that. To pull off a film like that is hard and appreciate my producers for trusting me. The producers, because of Shuddhi thought it’s better to just go with my vision. I had the full support of the producers throughout the process of making the film. Obviously, I had to stick to a budget that we had previously agreed upon. So that was the main difference. With Shuddhi I had to be very careful with the budget.

So, after the long and arduous journey, you finally made Shuddhi. What I wanted to ask is that you might have had to compromise and worry a lot during that time. Now that you have a proper budget and backing for Bhinna, has your approach to cinema changed in any way?

I would say now is much easier to execute than Shuddhi. It was mainly because everything was already in place. Within one week of shooting the film, we were on the edit table stitching the film together. It moved very fast. That’s because we had the resources that we required. I had the studio availability; I had the funds I needed to start the post-production process. Everything happened on time. With Shuddhi the main reason for the delay was I had to wait for the funds. That was the biggest problem. Eventually, I ended up investing in the film myself by taking a loan. In this case, the producers had planned everything, and they had their funds in place and on time. Everything was smooth, and everything was very fast. The shoot took just around 23 days and the post-production work took about two and a half three months.

Could you tell us a little bit about what we can expect from Bhinna?

Bhinna is basically a psychological thriller. And the difference between Shuddhi and Bhinna is that Shuddhi is a very large canvas film that takes place in several locations. You see the characters going from one end of the state to another. Bhinna takes place just in two houses. You know, it’s a story that happens overnight in two houses. In one house, there is this woman wants to become an actress who is reading the script of her future project which is one track of the narrative. Simultaneously we see the script play out on the other track. These two tracks are cut together, how are these tracks connected forms the crux of the story. There aren’t a lot of films that take place in very minimal locations, except for the occasional Kaun or Trapped. I liked the challenge of that.

When you have to write a script, it might take a long time to get it on paper and then to film and edit. So, if you have to put that much commitment into something, what is it that you look for, in when you start off that journey?

It must excite me, as simple as that. Anytime, I get an idea. I let it marinate or rest for two to three weeks initially. If it still excites me, that means it is a good enough idea. Because most of the ideas I get like, you know, initially I find it very exciting and in a matter of a week, I will be like, “oh, this might not work as a film”. Then I would drop it. This happens with every film. If the idea is good enough, it will manifest itself into the film. If it can keep me excited for two-three weeks, that means I can put 1-2 years into it. Recently, I was listening to an interview with Quentin Tarantino. He relates the selection process to that of dating. You must flirt with a few girls before you find the right one. I found that to be very insightful.

Well depends on the actors, man. I have worked with first-timers and I’ve also worked with people who have experience of more than 10-15 years. I also worked with a lot of theatre artists for Shuddhi. And most of them are different, but again, they have been in the states for a long time. So, when I direct people like that who are experienced. I don’t try to interfere too much and try to show them how they must deliver a line. I might tweak it a bit, but that’s all. I do at least 15-20 days of rehearsal before any film of mine. This makes it easier for us to find the performance in the rehearsals, which saves time on set

See, I mean, my first preference is always going to be towards a theatre release. I have experienced my film with an audience, and I can’t trade that for anything. It is almost euphoric. I saw the way they would react to a scene and I know that communal feeling of watching cannot be replicated at home, however big your screen is. But in today’s times, people have started doing films for digital platforms and gradually you know. If you’re doing a film for a digital platform you should know from day one that you’re doing it for digital platforms. But if you do a film for a theatrical release and then it goes to an OTT, that would be heart-breaking.

What about like a long-form content kind of thing, which you can’t really release in a theatre?

That’s a very good medium, absolutely. But once again, my point is Anurag Kashyap and Vikramaditya Motwane made Sacred Games. David Fincher who is a prolific filmmaker made Mindhunter or even our own Pavan Kumar with Leila. But these are film established filmmakers first. They bring something to the project, and they can’t be typecast. I want to do the same thing; I want to get to a point where my name is recognizable enough a serious filmmaker and then I want to step into those kinds of projects if I feel like I need to. But before that I want the audience and the industry to take me seriously. On that topic, I made a short film recently. I made it in collaboration with Tent Cinema called The Warriors. The short is cast fully with the students of the acting school. So, I am not averse to other mediums. I just need to position my career the right way first.

One last thing I wanted to ask, is if you could tell us about a few filmmakers and films that have influenced you the most regarding Cinema?

He is my biggest influence. Especially his multi-tasking and his use of montages really inspires me.

I love the worlds he builds and the characters we get to meet in his films.

His structure Is always impeccable.

I haven’t seen such a layered and amazingly put together films that I have seen. I can put it up there with the best.

I love the lead’s character’s practical optimism towards the system and the brilliant performance by Julia Roberts.

I love the detailing in the film and its cinematography

It’s all-round perfect, it happens to be my favorite film also.

The film is airtight. Not a frame is misplaced.

And with that brilliant list of recommendations, our interview ends. Thank you so much your time Mr. Adarsh Eshawarappa. Looking forward to Bhinna and much more from you in the future.