The Story Of Chintakindi Mallesham : Modern Bhagiratha Of The Weaving Industry 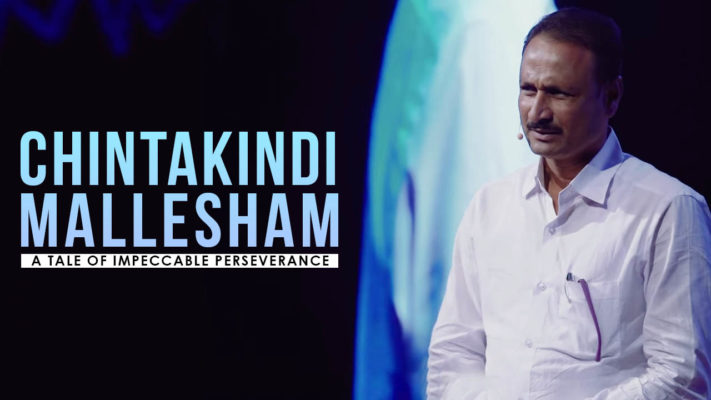 Remember the story of king Bhagiratha? His 60,000 great- uncles where cursed by Saint Kapila and for them to be released from the curse, Bhagiratha was advised to do penance by his guru Trithala to descend Goddess Ganga in the form river Ganges which would flow over the ashes of his great-uncles and relieve them of the curse. Bhagiratha did penance for not one, ten or a hundred but a thousand years. Unbelievable and impossible, right! Well, that’s a mythological story. I have no clue whether it’s true or false but I always found the story very fascinating. Why am I narrating this story now? Well, I found a real-life Bhagiratha!

Chintakindi Mallesham who hails from a small village Saradhipeta in Yadadri district of Telangana state, struggled for 7 years of his life to build a machine in order to help his mother. And now it’s not just helping his mother, but also hundreds of weavers in his village and outside.

A Tale Of Love, Perseverance And Success

Due to familial obligations, Mallesham had to learn to weave at a very young age and his mother would help both him and his father during the process. Winding a silk yarn on to a large frame, a process called Asu, which is a vital part in weaving the traditional Pochampalli Ikat sarees, left Mallesham’s mother and a lot of other women with sore arms and shoulders.

Mallesham wanted to do something to help his mother out. He was accused of wasting money and resources of his parents by his relatives and villagers for years. Amidst all the chaos and taunts he managed to build a machine which would do the work in half an hour which otherwise took six hours after seven long years filled with the ordeal and immense perseverance. Here there’s a small prelude- Being a dropout from the school Mallesham attempted to write his 10th boards privately only for the fear instilled in him by his friends of not getting married for being uneducated. He succeeded only in his third attempt. This same person went onto buying books related to electronics and circuits and made his way into studying every single aspect and invented the machine that was much cheaper and affordable. Inspiring is an understatement when we talk about his perseverance.

A Much Needed Reality Check

In one of his talks, Mallesham describes his ordeal with understanding the language in the books and how he managed to stick around for years with the same dream and finally achieved it. His tale is not just about his impeccable intelligence but also his unimaginable resilience. His story is a reality check. Despite producing lakhs of engineers every year, traditional weavers had to wait until the 21st century for such an invention.

Even though Mallesham had no educational background, he managed to make a few parts of his machine. But for further development, he had to rely on technical information for obvious reasons. Had he had or rather any and everybody had better educational opportunities, he would have created this machine much faster. This stands as an example of what education can do and the harsh reality of limitations of our educational system.

Not Medals Or Degrees, It’s Hard Work And Brilliance

Here a special mention needs to be made of our Padman. Mallesham is the Arunachalam Muruganatham of the weaving industry. Both of their stories are strikingly similar. Both wanted to do something to make the lives of their loved ones easier and healthier. Both went through extreme difficulties in order to figure out what to do to solve the problem. Both relied on trial and error methods. Relocated to different places, put all their money into the invention. Distanced themselves from villagers and families. Bearing all the taunts and unsupportive glances, they emerged victoriously and are now most vaunted for their inventions. Both these Men stand as an example of how unconditional love and dire need paves a way to extraordinary inventions.

Mallesham was awarded Padma Shri and NABARD Award along with being listed in Forbes for his inventions. He was also felicitated with Rashtrapathi Award in 2009 and Amazing Indians Award in 2016. His daughters Shwetha and Rupa are now studying textile engineering and fashion designing respectively. He hopes that they help the weavers more efficiently and quickly.

There’s soon going to be a Biopic of Mallesham released. Debutant Raj is going to direct a film inspired by Mallesham’s story where Priyadarshi is playing Mallesham and Jhansi was roped in to play his mother. Such tales do deserve a larger audience. Chintakindi Mallesham is inspiring everyone with his ineffable efforts to make a change. Hope we find more such incredible individuals and more of such amazing inventions in the years to come.