[VoxSpace Selects] Brooklyn Nine-Nine : A Tribute To The ‘Most Important’ Cop Show Ever 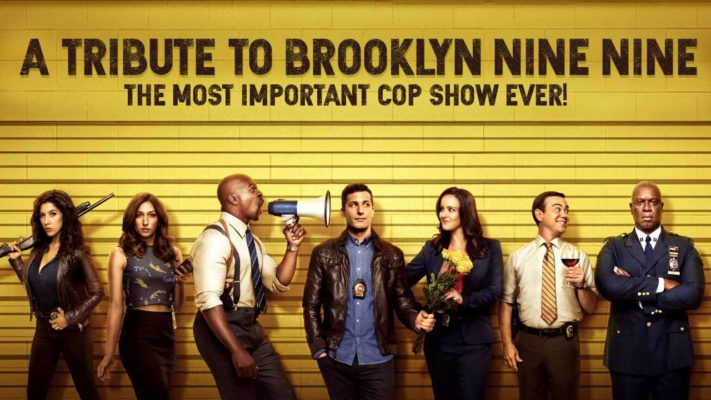 The Cop Comedy You Cannot Afford To Miss

If you think this is going to be a fan account on Brooklyn Nine-Nine, you are absolutely right. It is. I love this show and I want you to watch it. So read on…

If you ever heard a random yell of “title of your sex tape” from a friend and then seen them laughing like maniacs or your friend suddenly feels the urge to say the word “cool” at least 12 to 15 times as against once like normal people, or you find your friend singing “I want it that way” by Backstreet Boys at the top of their lungs but with a twist. Worry not! They are all Brooklyn Nine-Niners!

This cop comedy unlike any other comedy on TV is set in the 99th precinct of NYPD in Brooklyn and covers the crazy adventures that the team of detectives get into on a daily basis. This precinct is headed by an openly gay black cop, Captain Raymond Holt played by Andre Braugher who has a stone cold exterior and feels that a smile for more than 5 seconds is a conman’s ruse. Playing his favourite detective and the biggest pain in the ass is the ex-SNL star comedian Andy Samberg. His character Jake Peralta is the life of the precinct due to his goofy and fun loving nature. However he is very passionate about his job as a detective and he loves solving mysteries and he loves movies, Die Hard, in particular. Making up the rest of the team is Terry Crews, who plays Sergeant Terry Jeffords, a big muscular black man who is a super softie and loves yoghurt, his family and love. (Terry loves love!)

Melissa Fumero who plays a Latina officer Amy Santiago, who is a rule-abiding, ambitious and strong detective and who constantly clashes with Jake’s character, Stephanie Beatriz, whose character Rosa Diaz is an all black wearing tough Latina detective and Joe Lo Truglio who plays Charles Boyle, Jake’s best friend, a food enthusiast and honestly, a weird detective.

Stand up comedian Chelsea Peretti plays the secretary Gina Linetti, who in her own words is the human form of the 100 emoji. In other supporting roles are Dirk Blocker and Joel McKinnon Miller who play Hitchcock and Scully, two bizarre ageing detectives who love nothing more than to sit on their butts all day long, literally.

The beauty of this show is that the storyline while focusing on the weird cases that these detectives try to solve and maintaining the comedic tone, also raises some important questions and deals with some very relevant issues of today like racial profiling, gender discrimination at work-place, LGBTQ rights, toxic masculinity, patriarchy, feminism and many more. The treatment is also very neat and delicate and never in your face. The series also inherently projects a healthy inclusion and respect to all communities, genders and personalities and never tries to derive humour out of stereotypes or through homophobic or racial slurs.

Few episodes like “Halloween heist” ones, ”The Jimmy Jab Games” or “The Box” or the ones focusing on Jake and Amy’s growing relationship with each other and with Captain Holt are particularly delightful to watch. The Andy Samberg connection has led to many SNL stars like Bill Hader, Fred Armisen, Nick Kroll and Pete Davidson doing cameos in the show. The sixth season had Hamilton’s Lin Manuel Miranda too in a delightful cameo. Of all the recurring characters, however, the best undoubtedly is Doug Judy, aka The Pontiac Bandit played by the supremely talented Craig Robinson, who is a prolific car thief and who shares an amazing frenemy relationship with Andy’s Jake Peralta. Every episode with him is a solid winner.

Watch out for those hilarious cold opens, like the one where Jake makes a lineup of perps sing “I want it that way”, or the one where the detectives try to mimic Holt’s reaction to eating a marshmallow for the first time, or the time all of them try to guess why Amy Santiago is late by 70 seconds to the precinct. From being abducted in her sleep to falling into a different dimension, the possibilities are endless and increasingly hilarious

Interestingly, this show, produced by Andy Samberg himself, aired on Fox for 5 seasons then got cancelled. But due to the pressure of fans and celebrities like Lin Manuel Miranda, Mark Hamill and Seth Myers who call themselves the “Guardians of the 99”, the show was picked up by NBC for the sixth season and it recently got renewed for season seven. The first 5 seasons of the show are also up on Netflix to watch. On a loop for Nine-Niners like me.

So, this was my take on the super awesome show that is “Brooklyn Nine-Nine”.

Watch it and thank me later. Goes without saying, but binge watch it for best results. Hope you can take it all in at once – Title of your sex tape!