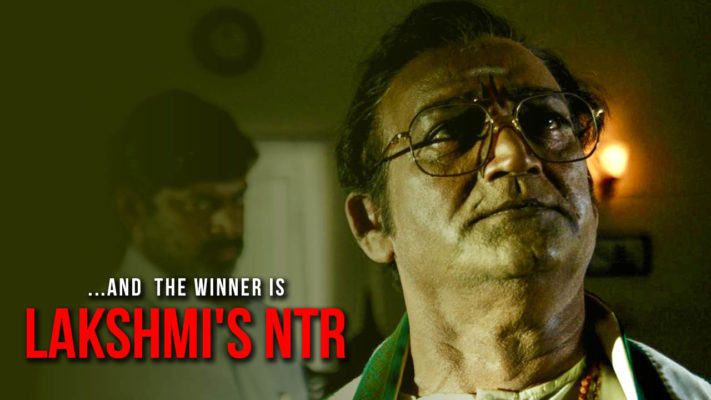 Every time RGV picks a subject to make a movie, he manages to grab eyeballs. He is a master of storytelling. Though I wouldn’t call Lakshmi’s NTR the best of his works, off late the publicity surrounding him and his filmmaking has been quite gross. He did disappoint many times and as a close admirer of his work, it was quite saddening to see some really crappy movies coming out on his name. However, this time he has emerged a winner. I have no political inclination to either of the parties involved, but as an audience, this film is a neatly crafted origami piece in a SUPW class at school. It justifies the title – Lakshmi’s NTR. The last few years of Andhra Pradesh’s most revered personalities, NT Rama Rao, through the eyes of Lakshmi Parvathy, his second wife.

When you weave your story around incidents and happenings from biographies of eminent personalities, you have a great challenge to live up to, specifically towards the historical facts hovering around the subject, while also maintaining the essence of storytelling. This one line sums up where Balakrishna’s biopic on his father, NTR – Kathanayakudu/Mahanayakudu failed and RGV’s Lakshmi’s NTR gained.

Just a thought here, maybe the former one would have worked better if they named it Basavatarakam’s NTR because it was NTR through her eyes and was about the NTR everyone knew. On the other hand, Lakshmi’s NTR is something, (although most of those following the iconic leader’s life remain aware of the story), that showcased so many things which no one knew. Precisely, The downfall and crisis NTR went through. RGV cleverly picked only this phase from the first person, Lakshmi Parvathy, named it Lakshmi’s NTR and has truly delivered on what he promised.

The movie starts right after NTR’s party (Mana Desam Party in this movie) lost the 1989 elections to INC. Lakshmi Parvathy gets to meet NTR to write a book on his life and learnings. Impressed by her ideologies and approach towards life, NTR takes her closer. While she names her relationship with NTR as a divine one, the Party and media accuse her as an evil dispensation on NTR and the Party, in turn, mocking NTR as a puppet in her hands. Infuriated by this disturbance and battle within his family, NTR officially announces Lakshmi as his wife at a film’s success event. They go on to win the 1994 elections with a great majority and NTR is voted back to power as the Chief Minister.

The Babu Factor And The DownFall

This disrupts Babu, who is just then making his mark in the Political arena and with the help of Lakshmi’s Lawyer and by seething influence upon NTR’s family, dethrones NTR and takes charge. Unable to bear the malicious behaviour of his own people, NTR breathes his last on 18th of January, 1996. This is the story of Lakshmi’s NTR. Or rather, Lakshmi’s version of NTR. When you call it Lakshmi’s NTR, it is evident enough that this is a biased story. But, RGV and Narendra Chary have managed to not let that affect the storytelling. The movie surgical to the point it wants to make and seldom deviates away.

Apart from the harmonious relationship, Lakshmi maintained with NTR, the movie in these parts of camaraderie tends to get a bit boring. Especially the drama between NTR and Lakshmi at times becomes too self-indulgent for its own good. The time when NTR marries Lakshmi is ushered off a bit too quickly. The relationship with her first husband after she agrees to marry NTR is left unanswered. But, RGV and Agasthya, despite these minor roadblocks, somehow manage to maintain the pace of the story, with a series of political happenings, stitched one after the other, in the truest manner possible. So, you don’t really mind the mistakes.

All In All, This Time RGV Is A Winner

A filmmaker like RGV is well known for utilizing the background score and after a long time, the BGM given by Kalyani Malik stands out as impressive. However, some of the songs do seem to be jarring. While the production could have been an area that required more attention, it can be surpassed when the story is something that intrigues you. Another component in filmmaking that RGV always manages to score brownie points in, is his casting. P Vijay Kumar, Yagna Shetty, and Sritej as NT Rama Rao, Lakshmi Parvathy and Nara Chandrababu Naidu respectively are spot on. We couldn’t ask for a better cast and they have definitely added value to the film. Maybe this is one area where NTR Kathanayakudu and Mahanayakudu so to speak, failed miserably.

Even after NT Rama Rao was dethroned as the Chief Minister in 1995, he made it evident in an interview with the press that he was backstabbed by his own people. So, the fact is out there in his own words. It is only in fictional movies we love to see a Hero as a Hero. When it comes to biopics, the protagonist is a Hero by default in everyone’s eyes. It is only when you show him as a human, his struggles, his agonies, his true nature, you get a space to empathize with him. You get to feel him as one amongst you.

It is a decent watch if you are interested in knowing the bitter drama that unfolded before his death. For sustaining the facts and showing that part of NTR we might not have known, this movie is satisfying. Lakshmi’s NTR is a saga of the Legend of Telugu Cinema in his last few years. Ram Gopal Varma and Agasthya Manju might have faltered here and there, but haven’t gone out of track. All in all, RGV’s, Agasthya’s and Lakshmi’s NTR is a winner!