[VoxSpace Selects] Ibis Trilogy On Screen, What Are The Fans Rooting For? 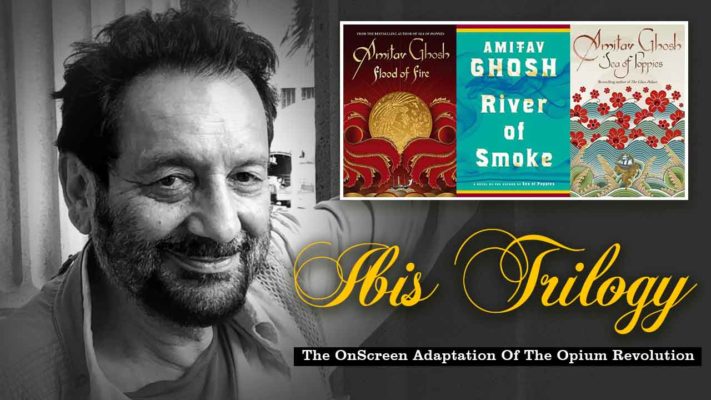 As Ibis Promises To Come On Streaming Channels, We Hope High In Anticipation

Shekar Kapur’s decision to bring Ibis trilogy on screen in cooperation with Endemol Shine Group India and DoveTale Media comes at an inglorious time. It is a period when the entire genre of historical drama in India has become a mortifying parade of clichés, unnecessary digressions, improvised scripts fashioned after schoolbook chapters and pumped up nationalism. No wonder that they eventually swallow up the entire undertaking of a historical drama into a bottomless pit. Unlike most of Indian drama series airing on major streaming, this adaptation of 1830’s India must remain true to the nuances of its original source to give us the adrenaline rush that the trilogy deserves.

Shekhar Kapur dreams of delivering his exorbitant franchise on an international level and certainly, it should be both beyond a textbook adaptation while at the same time remain firmly anchored to it. Ibis trilogy (Sea Of Poppies, River Of Smoke and Flood Of Fire) offers an excruciating tale of opium cultivation in 19th century Bengal and Bihar, the social status of gomasthas, binaries of a caste system and the assortment of oriental stereotypes. The man who started his career with the adaptation of Man Woman & Child, quite naturally tempts us to anticipate how conscientiously Ibis would be brought into animation. Ibis series has remained Amitav Ghosh’s magnum opus that had once swept over the Indian book market, penetrating into academic discussions and seminars on post-colonial literature.

A Tryst With Desi Tadka Of The Ibis Trilogy

It is Ghosh’s sheer brilliance to strategically place the subaltern consciousness to dissect the ravages of colonial rule and to look deep into the Indian casteist society. Opening chapter, Flood of Fire, delineates the treachery of Havildar Kesari Singh against his fellow natives as he serves the Empire, carrying its flamboyant insignia and terrorizing the villagers into flocking to the roadside. The Bengal Native Infantry were distinctly particular about hiring men belonging from either Brahmin or Rajput families.

In an industry, where a Sairat miraculously turns into Dhadak, we hope Kapur does not baulk at the dichotomy of caste and dharma. In its entirety, Ibis trilogy is also about bringing to screen the petarrah of colloquial words, some of the Hindustani origin, some Chinese, while other an adorable comingle of English-Hindustani. Every bit of colloquial and swadeshi elements emerge as a cue to poke fun at and explore linguistic discrepancies under multiple contexts. For instance, “achha” means “bad man” in “Gwong-jou-talk” of China as opposed to “all right” in English. These artistic rarities and nuances immensely depend on Kapur’s sense of execution to gain opulence and commercial success.

The Ibis trilogy must be an arduous task of chronicling the human emotions of those unnumbered multitudes who did not leave any journal behind them. Amitav Ghosh, as a novelist is compelled to weave them into eccentrics like Deeti, Jodu, Bahram Modi and Serang Ali out of fabrics of his imagination. They are victims of caste, cultural constraints, diaspora, opium trade and, of course, Ghosh’s eccentrics. Any impressive portrayal of such outlandish characters has always been on the fringes in Indian period dramas, except perhaps for Malik Kafur by Jim Sarbh in Padmavat who is a rather pretty addition to hyper-toxic masculinity in the film.

These characters have whimsically given a shape to the Cantonese history and the mysterious corruption that opium lead it into. It would be more than just simple textbook readings to hear history from these characters, and also an honour to the tremendous amount of research done by Ghosh.

Visual Stratagems For Audience To Binge On

As rightfully pointed out in River of Smoke, characters’ lives have as their epicentre the “skull of the great living creature that was a ship”

Bringing alive the lyrical beauty of Ghosh’s novels is one of the many laborious aspects of this project and could be Kapur’s coup de maître projecting the mayhem that the Opium War created. Several narratives ran helter-skelter, and it remains for us to see if the screen adaptation struggles under its weight. The collaboration of Endemol Shine Group India and DoveTale Media sounds promising enough to do justice to Ghosh’s treatment of nature and architecture elegance in Ibis.

Ibis trilogy at its heart has a world on the verge of plunging headlong for trade interests, exploiting, and politically marginalizing thousands in its wake. The series should be more than just a glamorous affair resulting from the commingling of dialects, patriotic frenzy, and exotic locations that most of the historical dramas have descended into. Visuals would recreate pre-independent Calcutta Strand Road with the colonial mansions, dingy gullies of Khidderpore, Canton and topography of Mauritius.

At the end of the day, fans would be expecting a series with good cinematography that would juxtapose cultural anomalies, layered upon one another; this would lace a powerful narrative on Opium War involving two powers goliaths China and UK.

To sum up, Shekhar Kapur must be ambitious enough to breathe life into this seafaring world of Ibis trilogy with the extremely limited sources available at his disposal right now.