Posted on October 3, 2019 by Srividya Vanamamalai 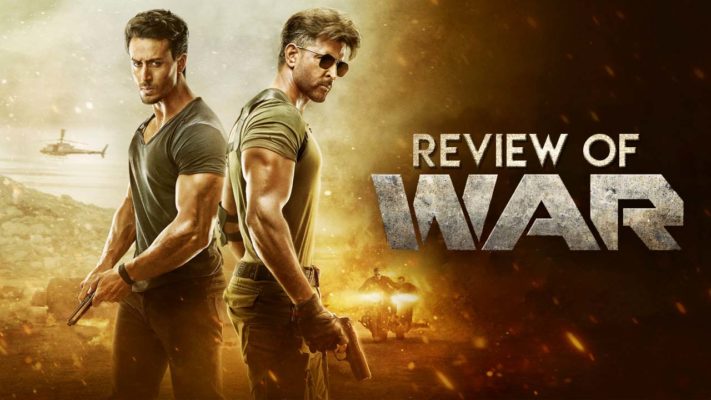 WAR : Copy My Homework But Change It Slightly

War is a lazily written film which conveniently borrows (being polite) from every alternative Hollywood action film. Some references being Mission Impossible, specially Ghost protocol (Obviously!), Bourne Trilogy, Knight and Day, the list is endless. War takes the efforts to explain everything pseudo-philosophically, credit goes to the writers of War – Aditya Chopra, Shridhar Raghavan, Abbas Tyrewala and director Siddharth Anand. Literally, the dialogues uttered are an amalgamation of superficial metaphors and dialogues taken from WhatsApp forwards. Siddharth Anand fails to reach every expectation of yours except for Hrithik’s continued and glorified screen presence. On the other hand, Tiger Shroff’s screen presence puts me off like a mosquito in my hall which disturbs my Tom Cruise binge marathon. The story is a hollow tunnel, where Aditya Chopra’s convenient writing bounces like echoes, unnecessarily.

Hrithik Roshan, undoubtedly, is a reincarnation of a Greek God who accidentally descended on a film set. The film opens with Hrithik apparently going rogue, which I actually didn’t mind but when Tiger Shroff forces himself into finding out why, it made me cringe a little. Somehow, Siddharth Anand manages to create a balance in terms of screenplay time for both these characters, Kabir (Hrithik Roshan) and Khalid (Tiger Shroff). This is exactly where my brain was searching for a pistol. Hrithik’s bearable storyline, despite its flaws, was inversely proportional to Tiger Shroff’s, if the writers intended a plotline in the first place.

WAR of Worlds Of Percolating Ideas…

Kabir is a RAW agent, gone rogue, as stated by Ashutosh Rana, who is pursued by his protégé, Khalid. The Jackie-Chan impersonator, apparently is a traitor’s son who killed Hrithik’s partner in battle and refuses to take him into his team. Colonel Luthra (Ashutosh Rana) convinces him otherwise and persuades Kabir to take Khalid onto his team, despite his father’s history. Tiger Shroff is tested, rigorously by Kabir, both on his loyalty and acting.

On his first mission, Kabir discovers Khalid’s weakness but lets him stay for his word-induced patriotism and badly-portrayed victim psychology. A Holi song pops out of nowhere, fitting imperfectly on an expensive set where they just had to, yes had to, get Tiger and Hrithik swinging around for a dance number, unnecessarily.

An extremely important mission is elaborately planned by Kabir to capture India’s most wanted terrorist, Rizwan Iiyasi, who has managed to evade their pursuits for 20 years, (Why am I not surprised). An exposition is spoon-fed to us that Osama Bin Laden will be forgotten, for Rizwan has vile plans to destroy India. This attack plan fails miserably when Khalid disobeys Kabir and unnecessarily shows off his Jackie Chan-ness and acrobatic Parkour skills, as he runs in pursuit of a man named Saurabh. Remember this man, if you’re planning to watch this film. Rizwan Iiyasi slips off of their hands again, with only 3 people surviving the enemy’s attack, You-Know-Who and Aditi played by Anupriya Goenka.

The Plot Thickens Because It Has To…

At the end of first half, Hrithik is killing two people who have absolutely zero relavance to the story or it’s caricatures, sorry, my bad, characters. We don’t know why they are being killed but the thing you need to remember when you enter back with your popcorn is Hrithik has turned rogue, just like the beginning. The second half begins with Hrithik’s flashback, a payoff for the daughter-father exchange before the interval. Using “spy-thriller” codenames and terms, we know it was Hrithik’s love interest, “one and only” naïve Naina (Vaani Kapoor), a dancer who is saving up money for her daughter.

The music, production design (Or location recce) and VFX are directly, unabashedly lifted from various “sources” and thoroughly unoriginal. I got so bored at the end of an hour that pointing out the flaws got tiring as well, as the film went on and on, taking you all across the world, for no reason whatsoever. The film is filled with so much style and show-off, that it looks like a James bond set without, well, James Bond. Except for Hrithik and Anupriya Goenka, poor casting decisions led to “War” being a disastrous watch on this dreadful Thursday. The stunts are mind-numbing literally, defying every theory in Physics and Geography. Hrithik’s dance moves were a delight to watch but Tiger Shroff is like that show-off classmate of yours, who imitates your steps in your school Annual day.

War is 154 minutes action film, devoid of logic, acting and plot, running high on Hrithik’s charm and Aditya Chopra’s money. If only they had spent money on a decent writer rather than all those sets, they blew up, cars destroyed and a star’s remuneration. War is disappointing and lastly, an insult to the audience’s minds and time.