“There is no such thing as an anti-war film,” is a quote by the late great film-maker, François Truffaut. What he might have meant is that a film in itself is a medium such that, even if the film-maker is trying to make a point against war, the very act of showing the brotherhood and comradery that is evident in war makes it pro-war.  That when you show a man giving his life away for his country, however hard the film-maker wants to condemn it, the audience is always going to feel empathetic towards the martyr and hence to his cause. So, is there no-one who can make an anti-war film? Of course not. The thing is, an audience always is going look at anything from their own narrow perspective. The film-maker’s job is to broaden that by manipulating them to look from a new perspective. While Truffaut recognizes the power of cinema, he overlooks the malleability and subversive nature of the film. Using these tools, Stanley Kubrick has made three 3 unmistakably anti-war films that I want to talk about.

Stanley Kubrick has always been a film-maker who has been very controversial with his subjects and has tackled big subjects like war, sexuality, existentialism and unchecked aggression in the youth, just to name a few. While he was still early in his carer, and his only bonafide hit being The Killing, chose to adapt Humphrey Cobb’s Paths of Glory.

The story centres on the French Colonel Dax (Kirk Douglas) as he defends three of his soldiers from being court-marshalled for political reasons during World war 1. The main plot in itself has a kind of anti-authoritarian bend to it. As in, being a Colonel going against his own regime. Add to that, the politicians making these decisions are shown as power hungry dimwits.

There are a couple of powerful moments in the film, where the futility of war is shown with maximum impact. Both these moments come towards the end of the film, the first moment is when the soldiers are about to be shot. We see, for the one last time, three broken soldiers being aimed at by their own men, following orders from cowards hiding behind their ivory towers. Depicting that the soldiers have been reduced to machines, used for war. 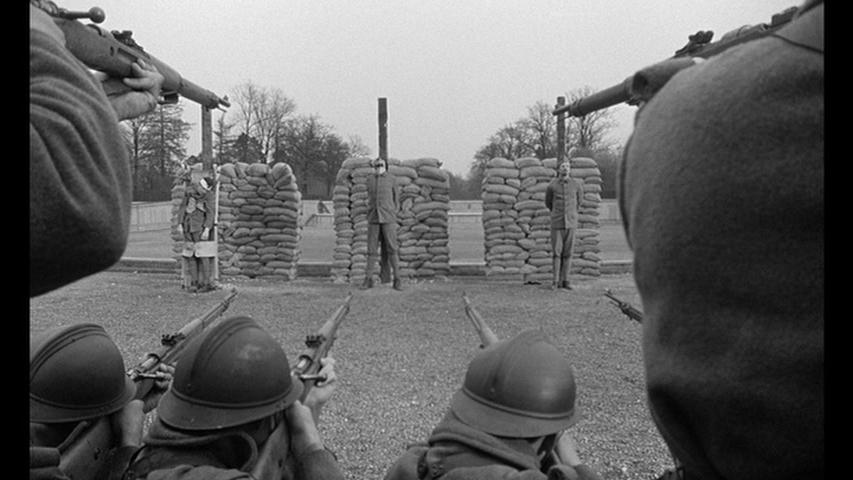 The second moment comes in the last scene of the film. The three soldiers have been court-martialled and as Colonel Dax is going back to his barracks, he witnesses a German woman singing for a group of French soldiers. She is singing a sentimental folksong. He sees that this song is moving these men to tears, and he is surprised because they don’t understand her.

The point the film-maker is trying to make is that the woman might be an immigrant, but her pain isn’t. Because, from a distance people on the other side seem like enemies, but once you listen to their pain, they become one of us. Maybe he is asking us to give ourselves a chance to learn about our enemies so that there is less pain in this world.

Dr Strangelove Or: How I Learned To Stop Worrying And Love The Bomb:

Dr Strangelove came at a point where the film-maker was in the middle of his transition of becoming a satirist and moving away from the gritty realism of his past films. Due to Spartacus being taken away from him and the public outrage towards Lolita, he became a lot more cynical. Out of his cynicism came his greatest film yet. While it was adapted from Peter George’s Red Alert, Kubrick chose to completely change the tone of the film. The book was a serious procedural, while the film is an over-the-top comedy.

The film is a comedy about the nuclear Holocaust of the human race during the height of the cold war. He chooses to make it a comedy because he saw it as such an absurd fact that countries would just stock-pile these weapons, on the assumption that the enemy will not attack us first. He shows us through the events of the film, that this kind of a global weapons-grade dick measuring contest turns the whole world into a ticking time-bomb waiting for some hyper-nationalist conspiratorial nut to pull the lever.

Just to give an idea of the tone, I would like to give the example of the most iconic line from the film. As the negotiations are going on in the proverbial war-room, a fight erupts between the American General and the Russian ambassador. To break the fight, the American president says, “Gentlemen, you can’t fight in here! This is the War Room!”, encapsulating the absurdity of wartime diplomacy in one line.

With Paths of Glory he dealt with war at a battalion level, with Strangelove he dealt it in a global sense. With his third and final war film, he goes personal with it. He manages to make it as subjective as a film can possibly get. He chooses to set this film during the Vietnam war. The tone of the film oscillates somewhere between docu-drama and an absurdist comedy. The film is cut into two sequences.

The first sequence purely deals with the boot camp, where we see Gomer Pyle slowly descending into insanity. We see the slow dehumanisation of the soldiers into nothing more than weapons. This is shown through the rigorous training and the brutal ways in which they are treated to de-sensitize them towards pain. This part of the story focusses on Gomer to show how easily these kinds of practices can turn people into monsters.

The basic themes that Kubrick so beautifully incorporates into his films are the dehumanizing nature and the bureaucratic futility of war. We see through each of these films how war can be used to hurt their own people, while also never glamorizing it. Hence Kubrick’s brilliant anti-war trilogy disproves Truffaut’s theory.

I would like to end this article with a couple of quotes by Kubrick:

If it can be written, or thought, it can be filmed.