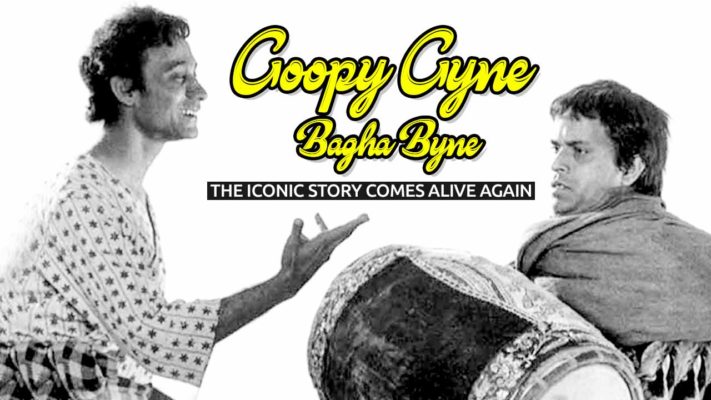 Paying Homage To The Fantasy Fiction And Political Satire

Joychandi Pahar, tucked away in Purulia, West Bengal is an undulating land with scattered hills, and Satyajit Ray’s plateau de torunage for Goopy Gyne Bagha Byne (1969), a film dipped in the dreamy elements of magical realism and fantasy fiction. Today as the Bengali speaking duo Goopy-Bagha turns 50, fans cannot help but rummage through Goopy-Bagha’s exuberant perambulates, magical escapades and the privileges of a flâneur’ s lifestyle that Ray gifted us half a century ago. Goopy-Bagha, two social outcasts and improvised artists, played by Tapen Chatterjee and Rabi Ghosh respectively, would be later translated into regional and major international languages, bagging two national and four international awards.

Bengal was at its peak of Naxal uprising, armed students’ movement, and mass activism when Goopy-Bagha’s enigma spread through the shabby lanes of Bengal.  Their chemistry was instantly a hit with the urban and rural audiences alike, capturing their imagination with an odd amalgamation of the fantastic, political and uncanny. Odd because, it was unprecedented in Bengal still recuperating from the massive violence that burnt every quarter of the city, shook every political institution from its foundation.

Goopy, Bagha, two austere characters draped in dhoti and shawl, drawn by Upendrakishore Ray Chowdhury, were rooted into the stark realities of their ordinary lives. Unlike the celebrated heroes of our land, they miserably failed at inheriting any real talent for art; the two prodigal village boys had little to offer the society later went on to bag whopping international recognition, beyond the fictional Shundi, and the theatre screens. In an age of political censorship on art, culture, and media, Goopy and Bagha remain emblematic of liberty, the freedom to be. It is not just a celebration of this iconic duo, the spokesperson of democracy and common people, but also an artist’s vision untainted by political clampdown. We have indeed come a long way since then, late 20th century Bengal, of keeping theatres free of party propaganda and blatant deification. Ray’s Goopy Gyne Bagha Byne had aesthetics so unwaveringly blended within the socio-political conditions of its time, this fantasy tale remains largely pertinent and peculiar to Ray’s oeuvres.

Ray As The Music Composer

Goopy Gyne Bagha Byne, Hirak Rajar Deshe, and Goopy Bagha Phire Elo complete the heroic deeds of the duo and a journey so replete with cinematic marvels pleated within the desolation of Bengal’s rural areas. Ray himself has written the lyrics of the trilogy, a volume overflowing with right-wing politics, lengthy harangues on dictatorship and war, giving us a glimpse into the banal and beautiful of Goopy-Bagha’s time. The bulk in itself is considered to be a vast literature strung together by the maverick that resonates within us till date. Ray’s symphony pulsates through each scene, echoing the universality of the emotions that this trilogy aspired to generate.

Goopy and Bagha are kept dangling amidst an array of characters that add to the political dimension of this trilogy. Goopy-Bagha are far from being apolitical and the amount of adulation that the trilogy has enjoyed can be partly attributed to this. Any understanding of the duo would remain incomplete without taking into equation King of Shundi, Borfi, Professor Udayan and other minor characters among others. Such characters could be vividly brought into life back then without any political ferocity, unexplained ban on screening, or burn of effigies. There is no daunting presence of “star personae” in this trilogy; even though Goopy-Bagha were born out of tolerant times, viewers were not allowed to indulge into self-alienation coming to the theatres just for the sake of star worshipping!

50 Years Of A World Of Hems And Haws

Set at the heart of contradiction, every film has its own set of political connotations to make. From the failure of state mechanisms to lack of a king’s better judgement, this hodgepodge needs continuous interference of magic to heal. In Hirak Rajar Deshe, we see the blissful anesthesia into which the kingdom has descended. Such morbid representation of a king’s desire to reign supreme at the cost of people’s opinions reflects on today’s limited scope of research, curb on campus politics, and freethinking that are heavily truncated due to the overwhelming prevalence of state censorship.

If the first film of the trilogy drops us in a deplorable world of wars and ammunition, Hirak Rajar Deshe is hallucinatory, producing the effect of a world glistening from afar forever receding beyond the stretch of your palm. Ray’s magic realism is not without its degree of hilarity, and contemporary political stances further heightened by eloquent use of language. It is also a world with an immense amount of hope, amounting to a complete overthrow of a dictatorial regime. Ray’s exploration of cinematic techniques for Goopy-Bagha trilogy, hitherto unexplored in Bengali cinema, remains unparalleled in the annals of time.

Let Not The Politics Subside In Goopy-Bagha!

Contrary to popular opinions, the world of Goopy-Bagha is far from being utopian one, it is perhaps the same contradiction that Aldous Huxley imposed on readers with Brave New World. Shundi is ruled by Goopy-Bagha, once outcasts and now invested in leading a globetrotter’s lives better than their kingly duties. They have managed to bargain two princesses, royal borne, in exchange for their magic. But how exactly Goopy and Bagha have managed to do their conjugal duties looms in dark. One ponders whether the administration of Shundi should be controlled by two lenient kings with their heads in the clouds?  Probabilities of dissent manifest itself in multitude, however, owing to the lack of sequels, fans can only speculate about the fate of Goopy-Bagha!

Ray has always maintained to show the rift between science and society (especially an agrarian one), where its usages can be inverted to send its subjects into a perpetual state of happy forgetfulness. The lingering effects of scientific experiments like “brainwash” is almost like a tranquilizer, deadening the feelings of doubt, dissent, and knowledge producing an infantile state of happiness and innocence. The metamorphosis from monarchy to democracy remains perennial, in this land of magic there is no ultimate salvation, no redemption from mortal blemishes; Goopy and Bagha might appear as a silver lining, if not the Good Shepherd.