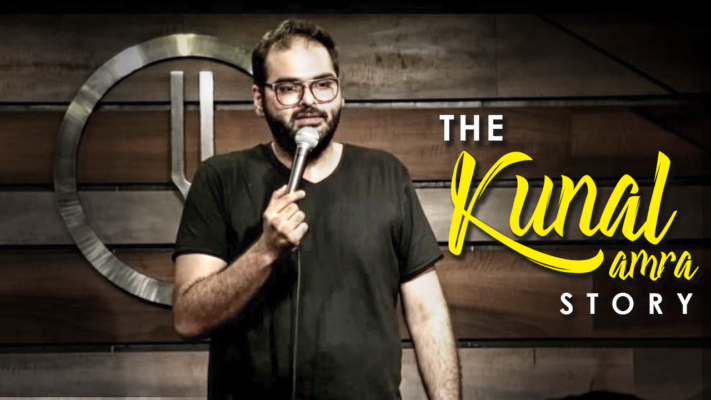 There are very few people who can make you laugh and open your eyes to some hard-hitting truth at the same time. Within ten days of uploading his first stand-up comedy clip, ‘Patriotism and the Government’, on YouTube, Kunal Kamra became a sensation who not only received love and laughter at his brilliantly timed punch lines but also found himself fighting several death threats. The punch line of this clip of 8 minutes, “Siachen mein hamaare jawaan lad rahe hain”, provokes a fun poke at those hyper-nationalists who use the Indian army as a defensive ploy every time someone points out shortcomings in the workings of the acting government.

In about three months, the clip had the undivided attention of a large number of audience which gained it more than a million views. However, owing to the hyper-nationalists that Kamra so clearly mocks at in the clip, the comedian has seen regular abuse and threats. However, Kamra is too sensible to take such threats seriously and says, “I’ve realized these fucktards are all talk online—they’re too lazy to follow up on them.”

Kunal Kamra is one of those very few artists who realizes his artistic responsibility and is ready to add a purpose to his work. He is determined to turn his artistic freedom into the right to truth. His intentions are clear when he says, “When institutions fail, I think it gives birth to alternative thought. My job is to have the sharpest critique on that situation.”

The sharp wit of Kamra might be overwhelming for some, but there are times when he leaves no stone unturned to avoid confusion. He has been direct and very open about his views regarding the present government and had left people shocked when he had tweeted his picture holding up a board that said, “Don’t vote for Modi”. Justifying this act, Kamra had shared his opinion, “I thought why are we hiding behind words like inclusivity and secularism? Why leave anything to people’s imagination.” Hiding behind Kamra’s sharp wit and humor stings is apparently a frustration and the sense of having been wronged by the government system. This frustration or anger is not personal but political, economic and social. It is the anger of the common deprived man who has been a victim at the hands of a government that feeds on violence. Kamra is the angry young man of India and he accepts this when he says, “If you are angry, there is a chance you’ll write something that comes from genuine emotion. My job is to mask the anger with humor.”

Just recently, the admittedly apolitical Kamra had dropped a stand-up comedy clip on YouTube in which he had suggested that leaders like Narendra Modi should be replaced by industrialists like Ratan Tata and Mukesh Ambani as the Prime Minister in order to obliterate corruption. While on one hand, the clip received an impressive amount of views and laughs, Kamra made it a point to share a message in between the lines. He pointed out at the fact that people in most parts of the state of Uttar Pradesh still do not have toilets, which has been an important concern for years now. Kunal’s method is not just limited to engaging his audience in a laughter ride but to make his audience ponder over serious matters while enjoying the laughter rides.

Not Going With The Flow

At a time, where most of the comedians are balancing their acts in order to play safe with every power that could give rise to a problem for them, Kunal Kamra stands out. This is clearly evident when he says, “I’m not doing some balancing act here, I never joked about the Congress because jokes are funniest if made on the establishment in power and Congress is an over explored and dated premise of jokes.” However, what makes Kunal Kamra stand out among the multitude of comedians rising in India today is that Kamra does not submit himself just to plain comedy. Kamra’s style goes out of the way in that he explores with a journalistic spirit, reaches to the heart of a matter and finally sugar coats the hard truth in humor. This journalistic side of Kamra is visibly palpable in his podcast show ‘Shut Up Ya Kunal’, a collaboration with Ramit Verma. The show presents itself in the form of interviews with the nation’s eminent political leaders. Despite its serious matter of interest, Kamra does not fail to make his show entertaining in the comical sense, by interspersing his serious interview sessions with funny clips and memes.

Hence, the question arises –Has comedy indeed taken up the role of the mainstream media? Kamra answers even this when he says, “That would be delusional. Currently, in India, both the journalist and the politician have to toe the party line. The comic does not. But we work in a bubble of entertainment. We do not have the mass appeal or the ability to sway a person’s mind. The comments I get at the end of my routine are ‘mazaa ayaa’, ‘sahi hai’ (enjoyed it, it was fun), not ‘you changed my opinion.’ But we can continue to push the envelope.”

Why He Does What He Does

Kunal Kamra’s podcast show, ‘Shut Up Ya Kunal’ has opened up new avenues for him where he has been able to meet his political idols. Regarding this, Kamra remarks, “Meeting Kanhaiya Kumar and Ravish Kumar was life-changing. It gave me perspective on the world outside my cocoon… what they do, what keeps them motivated, how they care for things.” While most people consider Kamra’s comedy as well as his views to be somewhat leaning to the liberal-leftist wing, some people find it as a singular agenda to rankle the governing party.

Kunal Kamra nonchalantly remarks on such propositions as he says, “See, the right-wing has ambitions that can never be fulfilled. They want to go back to the 16th century and take revenge against Babur. That can keep them busy for, say, the next 300-500 years.” Kunal Kamra is of the opinion that although comedy might not come in handy in initiating a change on a large scale, yet it is the first step towards making people thinking citizens –citizens who think before taking a step. On this note, Kamra fosters a hope that his comedy would nag people and perhaps it would be realized that his jokes are there not merely to make people laugh but are meant to do a lot more than that. In fact, Kamra wants himself to be perceived as a political overseer but definitely not as a political spokesperson for his preferable party. Kamra says, “I don’t know yet if my vote matters. If you do not vote for a bloc, your vote does not matter. In 2014, I voted for AAP, but it didn’t go anywhere.”

Kamra points out, “What is happening around us is that people are more rigid about their beliefs and are hanging on to their morals harder. But if society was perfect you won’t need artists.” He says further, “People are always angry in India. Earlier they were angry with Manmohan Singh. Now it is Narendra Modi.”

It is important that more and more comedians like Kunal Kamra stand up and make the truth visible under the kick of humor. Kamra has made his political views open and has separated the right from the wrong, the white from the black. Ultimately, it rests upon the people to either laugh away at Kamra’s jokes or filter out the message from them.