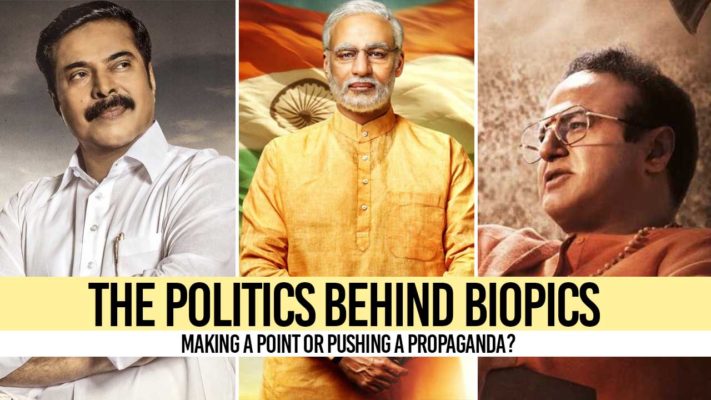 BioPics To Make A Point And Push A Propaganda…

Recently, actor Siddharth made a sarcastic jibe against Prime Minister Narendra Modi’s biopic starring Vivek Oberoi on Twitter. ‘PM Narendra Modi trailer doesn’t show how Modiji does not show how #Modiji won India’s Independence by single-handedly wiping out the British Empire,’ his tweet read. His statements once again brought back the debate about the way the biopics are being churned out.

Political films are not a new trend. Films like ‘Aandhi’, ‘Iruvar’ were controversial too, during their time, but there has never been a time like this, where a slew of political films are releasing one after the other trying to change the political narrative.

BioP0ics Are Just Tilting The Scales This Election Season…

It is the season of elections and so every political film would definitely raise some eyebrows. However, if one observes recent films like, ‘The Accidental Prime Minister’, ‘URI,’ ’Thackeray’, ‘Sanju’ or the recent trailer of  ‘My Name is RaGa’, they all seem to follow a pattern. They look like a deliberate attempt and an exercise of image building by their respective PR machinery. While it is understandable that a film needs drama to attract the audience, but isn’t it not fooling people by adding unreal things, glorifying them and making them into hagiographies? Biopics are supposed to be realistic and are expected to bring out the story the way it unfolded. Unfortunately, they are being made as a mere tool for propaganda for BJP and Congress parties.

The honesty and intention of the filmmaker are always understood through his films. For the filmmakers, biopics are challenging as they have to recreate an era and tell a real story. However, given the hurried pace at which they are being made and the purpose for which they are made for, one cannot help but crib about the authenticity of it. The very purpose of a biopic to be as real as possible is lost.

Regional Cinema Not Far Behind In The Pushy BioPics Game

The southern film industry has also joined the bandwagon in bringing out political films to create more hype in the upcoming elections. Telugu star Balakrishna starrer ‘Kathanayakudu’ and ‘Mahanayakudu’ tried to depict the life story of his late father, the legendary NTR. In spite of the huge popularity that NTR has in every Telugu household, the film tanked at the box office without any trace. The film only tried to glorify his achievements but failed to look at the other side of the truth.

Another film ’Yatra’, essayed by another popular superstar Mammootty, showcased a series of events in the life of former Chief Minister, the late Y.S Rajashekhar Reddy and his famous Padayatra during 2004. It is even reported that there is a special screening of the film was held in some villages of Andhra Pradesh to boost the morale of the supporters of YSRCP. Maverick director RGV is coming up with ‘Lakshmi’s NTR’, another film which promises to tell the real story of NTR. Meanwhile, in Tamil Nadu, a film titled ‘The Iron Lady’ on late Chief Minister, J Jayalalithaa, being played by Nithya Menen is already under production.

Unfortunately, all the above-mentioned films are being made just to woo the voters of particular communities during elections and play to the galleries but nothing else. The only exception, although not a political one, is Nag Ashwin’s ‘Mahanati’, a biopic made on actress Savithri. The film became a blockbuster because of the honesty in its approach. Other than the accomplishments, the movie portrayed the humane side of the actress in a far more endearing way which connected with the people.

Cinematic Liberty At What Cost?

It is true that a filmmaker has to take creative liberty to give the audience a cinematic experience, else it becomes a documentary. But, it shouldn’t be at the cost of diluting history which is in the public domain just to cater merely to the propaganda and to suit the personal agenda of the person involved.

More Stories Of Unsung Heroes – The True Essence Of BioPics

While the stories on popular people like politicians, film star always hog the limelight, it is important for filmmakers to showcase about people who have made a valuable contribution in their respective fields but have lost somewhere in the pages of history. Films like ‘Paansingh Tomar’ should be made and the lives of such people need more attention. It is heartening to know that ‘Mallesham’ a film on the inspiring journey of Padmashree awardee, Chinthakindi Mallesham is set for release soon. However, we need more of such stories to be told rather than films which are simply made for people to clean up their tainted image and political gains. Also, it is equally important for people to read between the lines and retrospect rather than fall prey to the emotional rhetoric of the politicians.