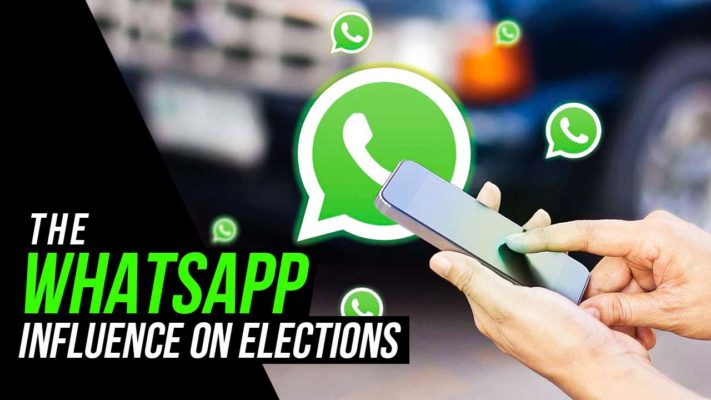 Time For Change With Technology

Elections are a time when political parties come to campaign giving promises to show their solidarity towards the nation. WhatsApp has taken a new initiative by getting into political polls where opinions could be shared. The medium allows you to share information across within seconds. The nation calls the election a pillar of democracy that is for the people, by the people, and of the people.

Vote – Wings Of Democracy With WhatsApp

WhatsApp reached its ultimatum with the launch of a smartphone in India. It has become a primary source of information. Vote spurs the nation with anxiety which can become detrimental in nature, if not harnessed.  The nation is curious to know, all that the parties do behind public visibility.  For the political parties, no amount of reasoning can make sense to tell the nation the facts. The masses have started its revolt for good governance through debates in WhatsApp. The youth raise voices against several issues to revamp the entire political system and bring change. We should speak about the Gross Domestic Product (GDP). Instead, we have debates on the price rise of Gas Diesel and Petrol, the so-called GDP. Our resources are plenty and implementations are less.

The election has to change its face so that people are unbiased. Cash flows should reduce its wandering from one door to another. Unbiased people elect honest leaders where corruption is wiped off. As technology has reached every nook and corner, it has taken a broader step through social network and media. As WhatsApp has come to use at large, communication happens over air and people have become tech savvy with apps in their fingers. In this fast growing world, we do not mind electing our leaders through apps.

Casting vote is the primary responsibility of every citizen in the country. Facebook and Twitter and WhatsApp played a crucial role in advertising for Elections this year. The news channels reported that the Chief Election Officer of Karnataka instructed the candidates to give their social networking account details to monitor the posts.

Political Campaign Witness Change In The World Of Technology

We have become game changers with technology. The social network has taken over the world with a notion of bringing freedom to the common man. The political campaign has reached to a wide spectrum of people, primarily through advertisements in YouTube channels that facilitate communication to the public on the Party Manifesto. In the old world scenario news and opinions flowed into the society through news channels, newspapers, and magazine. These hard copy material were not fast enough for the news greedy masses.

Then came the little genie called WhatsApp that could communicate to the individuals by jumping in and out of pockets by weaver touch of their fingers. Though it started with the exchange of messages between families and friends, it soon grew out to be a monster of all information. WhatsApp memes on politics go viral and portray the entire system and political propaganda with a high sense of humor.

As against planned media, WhatsApp gives personal opinions during the election season. This is creating a paradigm shift in the consumption of political opinions. Having a reputation of giving hot and real information, WhatsApp fell into the hands of political masters. It got subjected to manipulated information, selective misleading videos and motive based opinion that looked real. The app in the modern world of information has become a tool that can swing decisions from left to right and vice versa in the spur of a moment. So, WhatsApp made few changes that could reduce misleading information getting circulated within groups.

Communication today has become noisy hence calls for the exercise of ethics and collective resolve to shun false propaganda. Forwards that we do, should take the country forward. But most people tend to, and a few intend to circulate misleading information. Encryption is a drawback in the app. It does not allow individual messages to be tracked in the view of the political spectrum.

Set Back For WhatsApp During The Modern Era In Election

WhatsApp tried to reach its peak with 2019 Elections and came almost close to Twitter and Facebook. Since the app has few a hassles like the end to end encryption, fake rumors that go viral, it did not help the app to be part of the election. Politics being a serious affair the parties did not wish to take a risk of using the app as the information leads to misconception.

If WhatsApp controls misleading information especially on important issues in the country the app could take leap surpassing Facebook and Twitter. As millions of users in India are using the instant messaging app it would be a medium to exchange the right information that could bring a vast change in the societal front. WhatsApp is doing its best to make it a reliable source of communication by putting claws like ‘Forwarded text’ written on the top to indicate that it is a forward message. So that it does not affect anyone at a personal level. With similar efforts, the app will reach its expected level by the next election and will compete with Facebook and Twitter.