Posted on September 10, 2019 by Siddharth Naidu 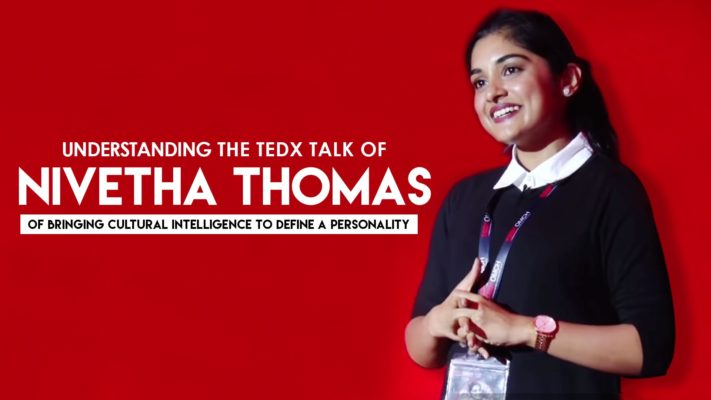 The Philosophy Of Nivetha Thomas – The Act Of Balancing

Roughly a week back, I had noticed in my feed that Nivetha Thomas had come out with a TEDx Talk, held here in Osmania Medical College. It was an intriguing bit of information, cause often times we are just privy to experiential talks of people from different walks of life, but never really the film industry, and that too the South Film Industry. Yes, I do remember Rana Daggubati’s TED Talk last year, but you get the point. The thing is, this notification in the feed, got lost somewhere in a plethora of other self-indulgent notifications, only to reappear in my feed today.

So, I sat down to watch what Nivetha Thomas, the obviously intelligent and articulate actor (do check out her interviews if you have a conflict in your mind) had to say. And I must say, in the short span of 20 minutes of her talk, she managed to touch upon knowledge points which were both relevant, relatable and absolutely resonating. From the point go, Nivetha Thomas, with her unmatched confidence and highly infectious humility, talked about the factors that led to her success. And she spoke from the heart, not just because she is perhaps someone like that in real life, but also because the points she was raising through the talk, required absolute honesty and generosity.

The Effect Of Cultural Integration…

The first thing that truly impressed me, is the point she spoke of ‘Cultural Integration’. We all know by now, that she’s not your usual ‘Telugu Kunchem Kunchem Ochu‘ actor. She’s someone who actually believes in the idea of belonging. Now, what was Cultural Integration. In simple understanding, the point is towards synchronizing the best of cultures to achieve the best of effects. Technically though, it is a complex study of how ‘Cultural Exposition’ affects a human’s psyche. If you are like me and follow TED Talks often, do remember to check out, Dalila Najib’s talk on the same. Now the talk and also various studies imply how Language and Culture can enhance the intellect of an average human, and not just that it also results in an exponentially better understanding of one’s artform. Simple logic is, learn more languages and imbibe more cultures and your mind expands like never before. At a metaphysical sense, I admired as to how Nivetha Thomas, an embodiment of Cultural Integration, can actually articulate the point with the simplest of terms. Multiple cultures and the act of accepting them as your own, creates the neural activity to better understand who you are? And that, my friend, is what is required for your art to flourish.

The Collective Victory And The Idea Of People…

The Second thing that Nivetha Thomas talked about, and again in the context of achieving impossible dreams, was about the absolute support system that is required to hone a personality. She talked about her extremely supportive school, friends and family, who stretched themselves thin, to help her achieve a balance between her profession and academics. This instance touches about the importance of people around you, clapping and patting you on the back, and so in turn encouraging you to achieve your dreams. Today, we live in a society which drives a person to achieve another person’s dreams. You have utter stupidity reeking in the education system, which makes Donkeys out of little children. Now, as we progress to the next generation, this is an important lesson to pack into our personalities right away. You want your children to succeed, and be something in life, be a parent, not a coach. The same goes with the schools we choose for our generations to come. Holistic education is the key, comrade.

The Importance Of Self Worth…

And finally, Nivetha organically flowed to the point which I think is the most precious takeaway from this talk. The idea of ‘Self Belief’. If Nivetha can mark her first commercial success in Telugu, build a stellar career right after, and on the other hand, simultaneously complete her graduation in Architecture, what’s your excuse, buddy? You know, I often meet people who do not suffer from troubles, but suffer from the lack of troubles. It troubles them that they do not have troubles.  These all things stem out from a point of being too ‘Self Critical’. The point is to have a rock solid ‘Self Belief’. I particularly liked one sentence which she said and which kind of summed it up for me – When you are down and out, there will be no one to help you out, but yourself. Truer words have not been spoken.

In the age where we loop listen ‘Believer by Imagine Dragons’ we often forget to actually trust in ourselves, our ideas, philosophies and our overall vision of life. We often discount our visions or ideas, as momentary whims which have no bearing to our existence. But then hey, that’s not how it works. You gotta stand up for yourself, because everyone else will be just sitting you down. Nivetha, thus provided inspiration through the most effective tool at her disposal – to be an example. Thus, she reestablished as to how intellect becomes the most valuable factor in defining an art form, ie., in her case portrayal of roles with utmost conviction and seething earnestness.

Nivetha Thomas after this might be a great star, perhaps become one of the best actors that this generation has to offer. She might go on to win International accolades, and maybe even have a temple to her name. But the thing is, even if none of these things happen, I dare say, that she’ll be one happy and satisfied person forever, with her consistently adorable blinking. Because you see, she’s having fun. She celebrates herself, and perhaps that is all what we need in this life. A celebration of ourselves. .

CHECK OUT THE TALK HERE: