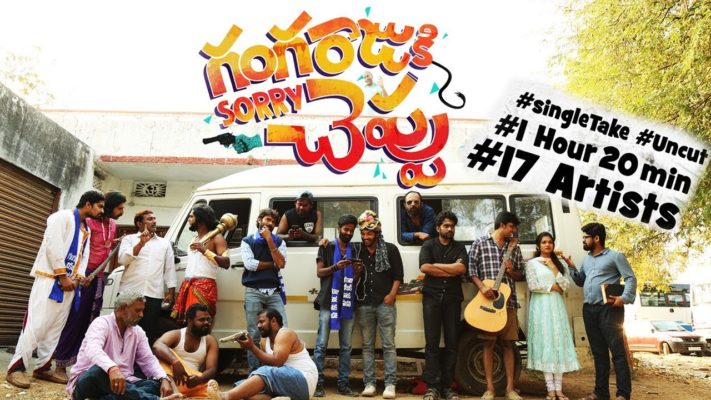 If you are someone who likes experimental movies, which are rare and few in our Telugu movie industry dominated by angry young men or old citizens, if ‘fans’ wish so, cajoling actresses half their age, then this movie ‘Gangaraju Ki Sorry Cheppu’ is something you need to watch, not just because it is a conceptually ambitious and mostly realized movie marketed with the brand of Tollywood’s ‘One Take’ movie, but also because it does it while being unequivocally comic, albeit with quirky characters and a well connected narrative that sways from the thin veined lanes of the city to the deserted thrown away spaces outside the city, never truly letting go of the overall silliness of the premise, which we first hear through a range of interesting characters, opening with ManojSuri and Sunny Naveen discussing a vengeance plan to kill a certain don by name Jaganatham played with particular Malayali poise and menace by John Kottoly, as they are overheard by the Landlord’s son, played by Priyadarshi with childlike charisma, and thus starts a narrative strand which bounds the three of them, ie., the two brothers and Priyadarshi as they set out to buy a pistol from a local thug, whilst eating chakodis, as they are intercepted by the elder brother’s girlfriend, Seema Chaudhary and her hyperactive lawyer brother, played by Abhay Bethiganti with his trademarked crackling comic timing, while the intersection only leads to the lovers parting ways, as the two brothers’s vengeance takes precedence over everything else, and they set out to their next part of the plan courtesy some cleverly used cinematic trick to maintain seamless transition by introduction of new charecters, that of Gangaraju’s disciples who owe him a huge debt, and are adamant in supporting their kill streak, only to be undermined  by the brothers who want their own closure, shown by a dramatic and sepia bracketed exposition scene, which although works well in establishing the plotline, but falls flat when it is dragged for a bit too long, and thus adding to the flaws of the film, which specifically point towards the lack of clear cinematography, mostly toned down to shadows to undercut the blown out skies, doesn’t add to the required clarity and poignant ambiance, usually seen in ‘One Take’ shots from ‘Sebastian Schipper’s Victoria’, ‘Alex Garcia Lopez’s Daredevil’ or ‘Alfonso Cuaron’s Children of Men’, thus taking the viewer out of the experience, built structurally with the comic timing of characters like Darshi, Abhay and a hilariously sketched, world cinema and Kubrick loving gangster, played by Pawon Ramesh, making the movie an essential watch for everyone who loves comedy, characters and the technical brilliance of achieving a seemingly impossible task of creative writing and technical brilliance which pushes the envelop forward.