[VoxSpace Review] Kobbari Matta : A Seriously Hilarious Movie Which Checks All The Boxes 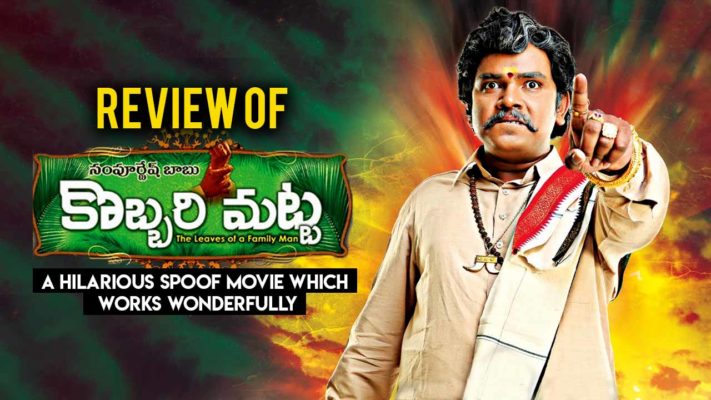 Kobbari Matta – A Spoof Everyone Should Be Proud Of

Fuck every movie which wants to forcefully tell a story which is nothing but a pretense of some sort or the other.

Now that we have cleared that off, go watch Kobbari Matta. As simple as that. Here is a movie which is telling a story without telling it. It is a commentary. A narrative satire on every 80’s and 90’s Tollywood movie which revolved around the dynamic patriarchal family setup ripe with a ‘head of the family’ and his multiple wives and multiple sons and multiple motivations and multiple multiples. Kobbari Matta starring Burning Star Sampoornesh Babu as the decision shouting sole proprietor of a family reminded me of atleast a dozen or odd superhit flicks like – Pedda Rayudu, Siva Rama Raju, Jayam Manadera, Arunachalam, Chinna Rayudu, Rayalaseema Ramanna Chowdary amongst others ( and fuck I’ve seen all these movies, come to think of it, I was a victim of bad influence back then).

Sampoornesh Babu, who plays three different effervescent roles in this movie, never fails to exude charm and ridiculous confidence in owning up what is asked and expected out of him. He plays, Papa Rayudu ( inspired by Sardar Papa Rayudu) the ancestral head of the family, succeeded by Pedda Rayudu his prodigal son who leads the patriarchy forward and Androyudu who becomes the heir apparent. The setup of the movie, and yes setup not the story (because it is a wonderous hotch potch of other films of the genre) is that in a typical Konaseema village (if you don’t know what that is, I’m afraid this review is not for you), Rayudu family consists of four sons, two daughters, two daughter in laws, three servants, and seven cows.

As the establishment shots establish Sardar Papa Rayudu and his role as the ultimate savior of the village, we come to know that this family is so closely knit, that they brush with the same toothbrush, bath with the same coir and literally sleep on the same bed. Calamity strikes when a new member in the family starts questioning the age-old traditions of this impeccable household. And from there, as any head of the family worth his salt and pepper would do, Rayudu is left contemplating whether his role in the family is justified or not. Calamity again strikes when someone by the name Androyudu, appears out of nowhere raising a claim to the property of this Hindu Undivided Family (HUF), and to make things worse, looks like a color xerox copy of Pedda Rayudu. The rest of the film follows the antics of Pedda Rayudu, PapaRayudu and Androyudu in trying to get the best of all worlds.

What Works And What Doesn’t (Because That’s The Rule Of Every Review Ever!)

The film Kobbari Matta works on three things specifically. Firstly, the movie depends heavily on the performances of Sampoornesh Babu as he manages to bring laughs at every second word he utters. He cries and moans, he laughs and groans, and he rants every half an hour to build a tempo that parallels the biggest blockbusters of the decade. Sampoornesh Babu, who enthralled the comedy genre lovers with his absolute confidence and unwavering dialogue delivery in Hrudaya Kaaleyam (his first movie) ups the ante here, by making sure that he delivers something spectacular every single time. Take this mind boggling rant below for example.

The second factor which makes Kobbari Matta an enjoyable popcorn entertainment is the genre deconstruction to the detail. The makers of the film, including Director Rupak Ronaldson and Screenplay Writer Steven Shankar, break down the zamindari patriarchal divisive family setup, only to carefully knit them back together, so that not a single beat goes missing. You have the morally upright family head, rogue brother who attempts a rape on a servant, revering servants and villagers, women treated to be nothing but marriage programmed objects, family feuds over trivial things, ups and lows, trails and tribulations and everything.

The cast of the movie including Ishika Singh as one of the wives of Pedda Rayudu, is sketched to be as template as the word template goes, and she delivers with flying colors. Same is the case with Shakeela and Mahesh Kathi who make for an odd couple joined into matrimony by Pedda Rayudu and for that they owe him literally everything. Another big strength that the movie can boast of, are some impeccable and whistle podu dialogues, which would give any writer including me, a great deal of inherent inferiority complex. Like in the case of Hrudaya Kaaleyam, the dialogues are crisp, to the point and extremely well thought out, with contextual satires in place to make the sentences ring true and bring a laugh.

All in all, the film Kobbari Matta works on different levels and delivers on its promise of being a seriously well written spoof movie which never takes itself too seriously. And that’s the best thing working for the movie and the genre itself.

(PS : If you haven’t still, go watch ‘Hrudaya Kaaleyam’ as well. It’s absolute fun and is now available on HotStar).