[VoxSpace Review] Hobbs And Shaw Review : A Popcorn Entertainer Which Works For The Genre Fans 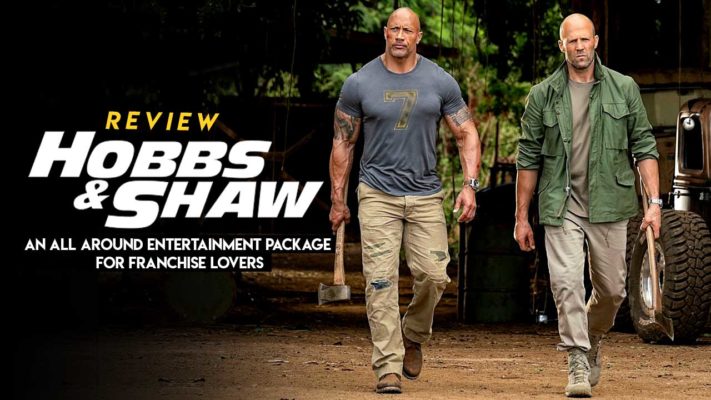 A Successful Franchise Flexes Its Muscles…

Fast and Furious is one of the most successful and popular franchise all over the world. It has eight parts to it and the ninth one is already in the making. The franchise has given us great action set pieces, thrilling car and bike chases and most importantly, characters that have stayed with us from long. Dominic Toretto (played by Vin Diesel), Brian O’Conner (played by Paul Walker) and Luke Hobbs (played by Dwayne Johnson) are the main characters who have taken the story forward over the years. And now expanding the franchise, the makers have come with a spin-off of the franchise ‘Hobbs and Shaw’ starring Dwayne Johnson, Jason Statham, Vanessa Kirby, and Idris Elba. Let’s delve more into the latest offering of this successful franchise and try to understand its world.

The story begins with one of the MI6 agents Hattie Shaw (played by Vanessa Kirby), who along with her fellow agents are trying to retrieve a deadly virus called Snowflake, designed by a highly advanced organization called Eteon. As they are doing it, Brixton Lore (played by Idris Elba), a super-advanced amalgamation of human and machine, designed by Eteon, comes there and kills all the agents except Hattie who injects the virus into herself as a dormant carrier and somehow manages to escape. The Eteon which is one of the most powerful organizations in the world manages to declare Hattie as a traitor.

Luke Hobbs (played by Dwayne Johnson) and Deckard Shaw (played by Jason Statham) are informed about the same and are called in to work together as a team and solve the issue. Both Hobbs and Shaw hate each other to the core but are forced to put aside their differences and join Hattie who is Deckard’s sister to basically save the world.

The premise of the movie at the story level is very basic. There is a bad guy, there is a good guy and there are personal stakes involved for them to justify their actions. But having said that, the screenplay becomes interesting and visually enriching. The whole movie is driven by Dwayne Johnson and Jason Statham and their incredible chemistry on screen. Both of them are constantly trying to take a dig at each other and that is refreshing and entertaining to watch. The dialogues are written amazingly and go well with the narrative and characters.

The movie is filled with various elements which give an all-round entertaining package to the audience. There are some really awesome cars and bikes chase sequences and well-choreographed action set pieces. Director David Leitch constantly manages to keep you hooked throughout the movie. He manages to hold the audience’s attention through almost every scene and uses both Dwayne and Jason’s screen presence to his strength. Personally, I liked the back story written for Luke Hobbs and enjoyed all the characters related to him.

The movies which are made with such high budget or are part of a branded franchise usually don’t compromise in the production. And same is the case with this movie. All the technical aspects of the movie like cinematography, editing, background score, etc., are on point and together they present a visually appealing movie.

If I have to pinpoint any flaw, I think Idris Elba had very less screen time and it would have been good if his character had more to offer. But it’s not a big issue. It still fits well in the movie.

All in all, the movie is very entertaining and has something or other to offer to everyone. Do check it out if you want to have a good time this weekend. Look out for some awesome and surprising cameos in the movie. Cheers.