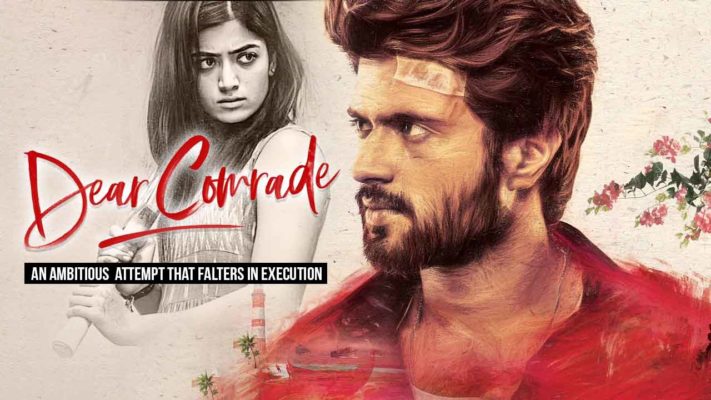 Dear Comrade is a film that released with enormous hype and riding high on the enormous good-will that it’s lead Vijay Devarakonda has generated in the past few years. The movie released in all the southern states. So, as I walked into the theatre, I was expecting nothing less than a masterpiece. But within the first few moments of the film, all my hopes were deflated. I knew that I was watching a film that was trying to be so many things but happened to fail at every one of those aspects.

As we open the film, we see a drunk and heartbroken man, Bobby, who is ready to pick a fight with anyone for no reason. His friends come in and try to get him to safety, but he is too broken up about his past that he is inconsolable. So, I knew I had to brace myself for a meet-cute love story that would justify this behavior. Immediately I have become a passive viewer who knows exactly what is coming. I am going to watch two people fall in love and then fall apart owing to the anger issues hinted by the opening scene.

He then goes on a journey of self-discovery to realize his flaws which allows him to change. The problem is not just that it is predictable, you can tell a familiar story in a new and interesting way. In fact, his own film Arjun Reddy does that using the template of Devdas. The problem with this film is that it feels like the writer is just checking boxes as he goes on how to make a bland and boring Imtiaz Ali film with a gimmicky twist in the end.

While I could’ve still lived with just a bland Imtiaz Ali film. My biggest problem comes from the way he uses gender politics in the film. I have always felt that, when you are touching on a subject as sensitive as sexual harassment, you should tackle it with a certain amount of tact and maturity. Here the film-maker uses it as a third act reveal that leads to the climax of the film. This especially ticked me off. I don’t want to attribute intentions where there might have been none. But the way he uses sexual harassment as a big plot point in the end, which comes out of nowhere felt very exploitative and extremely juvenile.

The way he resolves the problem is so flimsy and simplistic that it is offensive to the plight of many women who are still for the world to listen to their side of the story. Every situation cannot be solved by beating or shouting at someone into submission, we live in a world with laws and rules. I can expect this from a masala film like Temper or Simmba, but not from a movie like this, where the film-maker is touting it to be very realistic and profound. I don’t even want to touch on the way he deals with communism, because he doesn’t. He just uses the comrade to sell the point of guardianship or comradery in general.

The casting for the film is pretty on point. Everyone fits their bill perfectly. Both the leads have amazing charisma and it is very believable that they would fall in love. Most of the supporting characters do their job well to sell the world of Bobby and Lilly. Suhas and Shruthi Ramachandran especially stand out in their respective roles. The one person whom I had a problem with was Raj Arjun. I have been a huge fan of Raj Arjun from his Black Friday to his recent block-buster Secret Superstar. He has always given really layered and interesting performances, but in this film, he seems over-dramatic and almost caricature-ish. Maybe it is because of the unidimensional character that was written for him. Another big problem that hampers the performances was that the dubbing was out of sync in a lot of moments, especially for Raj Arjun’s character.

The technical aspects of the film all-round great. The cinematography by Sujith Sarang is lush and almost lyrical in the way he uses frames within frames, especially during the many montages that are used in the film. The production design was seamless in its execution. The costume design is very expressive about the mood of the characters. The editing is crisp not taking the pacing into consideration. The soundtrack and the score are outstanding and almost saves the film, if not for the sluggish pace of the film.

The film overall is a very mixed bag. I love the work and effort put into every aspect of the film, I just wish they put that same amount of effort into the script and pacing too. If anyone is interested in watching the film, I would say go watch it, but just be warned about the subject matter and the length of the film.