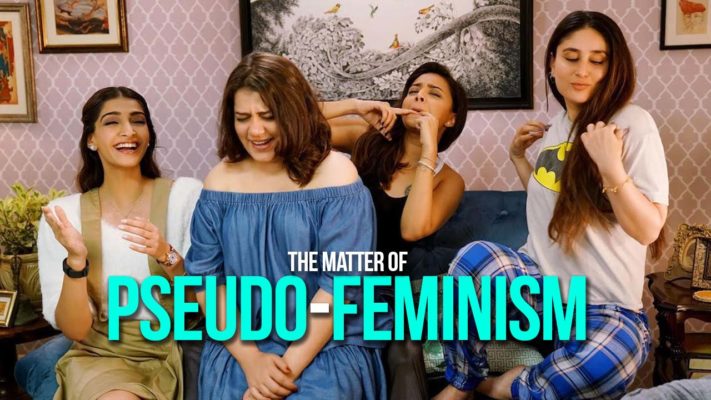 Feminism isn’t about making women stronger. Women are already strong. It is about changing the way the world perceives them. While abruptly searching through my notebook to get the perfect – short and crisp – definition of feminism, I was struck by these golden words by GD Anderson. We have arrived at a juncture, where feminism is either mistaken for misandry or being outrightly sexist, i.e., veering towards the celebration of women to the extent that the male is slowly deemed out of existence. Feminism does not want a world devoid of men. It is simply in search of a world which does not think twice before extending same rights to all its dwellers irrespective of gender. Seemingly it is as easy as any basic thought should be. Rocket science is definitely not involved in this yet our Bollywood brethren fail to grasp the essence of feminism over and over again.

Through the garb of feminism, gender normative roles are time and again been dumped on the women, showcasing their position in the society in stark, HD images. Be it ‘Sultan’ or ‘Veere Di Wedding’, through various antics, situations, and dialogues, women are forced to return to their “roots” – the root which essentially ties it to the patriarchal normative life.

Bollywood And Its Affinity Towards Happy Endings

Happy endings are definitely good. I wonder if there is any person who does not like happy endings, even Hitler would have wanted a “happy ending” for Germany from his own perspective. However, happy endings are all about perspective, and Bollywood is seemingly still far away from steering away from the patriarchal stance of it. Even with promising “feminist” film like ‘Sultan’ (2016), where Anushka’s character, Aarfa’s sole desire since childhood is to become an Olympic gold medallist in wrestling category, the trope of family and marriage outshines all the noble ideas and desires. Although Aarfa’s life revolved around wrestling, right before the Olympics, she finds out about her pregnancy and smilingly trashes all her wishes and desire for the “true” medal that’s growing up inside her.

While the filmmakers kept on arguing that it’s the choice-making ability of the woman that was at the crux of it all, the fact that the male filmmakers consider a loving husband and children to be the truest “comfort” and “desire” that a woman can have is indeed disappointing in today’s time and age. Furthermore, according to some others involved with the film, Aarfa showcased the plight of Haryanvi sportswomen. However, it is to be noted here that it is the same state that has produced innumerable female sporting stars, from the Phogat sisters to Hockey goalkeeper Savita Poonia, and Nirmala Devi among others, who kept their burning desire ahead of everything else. The marriage did come, but not at the cost of one’s dreams – that’s completely preposterous for the women of this day.

Uttering cuss words was always a strict NO for women – it was the necessary thin line that segregated “good” women from the “bad”. So, when Bollywood started showcasing women uttering cuss words with complete ease, it was somewhat refreshing and emancipating. However, uttering cuss words unnecessarily, just for the sake of it, is not really emancipating in any way. It is simply disturbing, no matter whether it comes from a boy or a girl. And sadly, Bollywood excels in exemplifying such forced versions feminism.

Let’s take the Veeres here as an example. The four friends in Veere Di Wedding are showcased as carefree women, who do not mince their words to express their desires and feelings. Their emancipation is not just on a personal level, but also on a social level. If one visualizes the movie from this front, it is indeed one of the most path-breaking Indian films, albeit woven around a loose plot. However, more than often in the film, the use of cuss words seemed redundant. Particularly, Sonam’s use of cuss words to vent out her frustration for being conditioned and judged about her unmarried status often exasperated the viewers.

Another thing, which surely might have attracted the attention of sensible viewers in the film, is how the lead characters subvert feminism and engage in humiliating women by using senseless cuss words and one-liners. In one of the scenes, one of the veere asks the other to stop crying like a prostitute. Yes, you heard it right. The line itself is enough to showcase the lack of basic knowledge about feminism in the Bollywood brethren – at the end of the day, everything comes back to square one.

Sexual emancipation is also another important aspect of feminism. Women should have the liberty to indulge in sexual activities freely without batting an eyelid about the societal norms and shackles, which are forever elusive to the men. Many Bollywood films, such as Masaan, have shown women indulging in pre-marital sex with full knowledge and a burning desire.

Not just in Veere Di Wedding and Sultan, even in celebrated films like Simran, and Tanu Weds Manu Returns among others, one might easily find tropes and ideas that go on to subvert the essential essence of feminism that these films tend to uphold. Had it not been for films like Queen, English Vinglish and Mom, etc. we would definitely have lost our faith in commercial Hindi films and its subsequent desire to treat women fairly, equally and justly.