[VoxSpace Life] Here’s Why Fidaa, And Not Arjun Reddy Is The True Game Changer In Telugu Film Industry 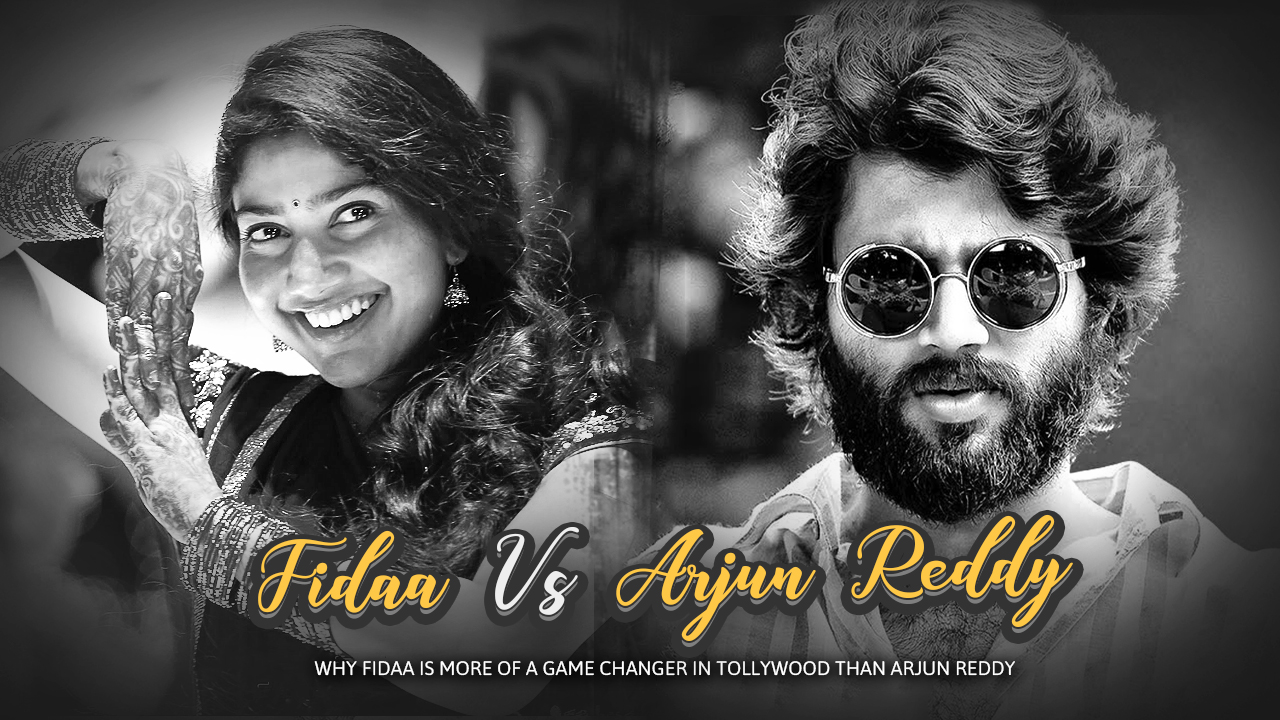 Before You Get To Bashing Me Up – Hear Me Out?

I waited so long to publish this article because I wanted everyone to watch both the movies (probably considered the best of 2017). So, now that you have watched both of them. This is a good time to read the article, and as the headline says, here I try to explain why Fidaa is more of a game changer in Telugu Film Industry. Read along and you be the judge.

First of all, Fidaa breaks all the typical Telugu movie stereotypes like,

1. A female lead is only in the film to magically appear in the middle of the song to dance in some highly fancy sets.

2. Lead actress doesn’t need backstory (or as a matter of fact, she does not need a story at all). If you’ve seen the new AIB video ‘The Diva Song’ starring Kangana Ranaut, you know what I’m talking about.

3. Unlike most of the other Telugu films, Fidaa doesn’t intend to have ‘Male Chauvinism’. (On a better side, the story revolves around the lead actress). Now tell me how many films have you seen where the women were given equal deserving importance. Even in 2016, Tapsee Pannu’s Pink had a Male lead (Amitabh Bachchan) to save the girls, and teach the society a lesson. Why? Can’t women put across a point without the help of a man? (That’s a whole different topic already discussed by many other Media)

A surreally feminist film of the year is what Fidaa is. There is a scene in the film where, the male lead Varun Tej, flies down from America to a small village in India to ‘Look at the woman his brother is going to marry, and judge/decide whether she’s perfect for him’ which is generally called as Pellichoopulu in Telugu.

Right in this scene, we see the lead actress Bhanumathi (Sai Pallavi) question the science behind, ‘Why should a woman be prepared to be judged by a totally random guy?’. In fact, ‘Why should women be afraid of being judged (or worse rejected) by a whole new family?’

Now if you ask me, ‘Everything sounds logical, but why are you comparing this film with Arjun Reddy, when these both are two totally different, unrelated movies? right?’. Yes. They are different. But let me put across my points for Arjun Reddy as well.

Well, Arjun Reddy is being labelled as a ‘Game changer in Telugu Film Industry’ which means it has bent all the stereotypes of the society. Additionally, it has changed the game of filmmaking from now on (which it actually did in some ways, like, being brave, honest, and raw, and not being afraid of the censor board).

But, if you look at it closely, it is nothing more than a story of an extremely chauvinist guy, recovering, and getting his shit back together in life. And accordingly, the makers decide to run the entire movie on the theme of how love has ruined his life after THEIR breakup, (which surprisingly nowhere in the middle, shows the journey/story of the heroine. We never get to know about what she has been up to? what happened to her life? But instead, cut to the climax, she narrates the entire situation in just five, short minutes). Why? Sorry, but the audience does not want to know the story of a woman. (Should have guessed it by the title ‘Arjun Reddy’ itself. Even though this is a love story, we will be only focusing on Mr Arjun Reddy himself, and none other).

What Fidaa Gets Right And Where Does Arjun Reddy Actually Falter?

Not just some casual male domination and chauvinism, Arjun Reddy has blatantly ignored so many things. To start off, primarily, the consent of a woman (Arjun leaves a kiss on Preethi’s cheek, just in their second meet. And she has nothing to say in return to him. Instead, she remains silent because the only dialogues given to her in the film are ‘Baby, Baby’ and Arjun is senior to her).

And in another scene, to which I have ironically heard the second loudest cheer in the theatre (of course the first being for ‘Madarchod’ dialogue), is where Arjun slaps Preethi, warns her to pack bags and move out of her house. I fail to understand, what is so nerve breaking, and exciting enough to cheer so loud in this scene?

Arjun is the kind of a guy, who tries to explain to the audience, that not all Airhostesses need to look extraordinarily beautiful, and women should not be judged by their appearance. But, also at the same time, he is the kind of guy, who tries to explain Preethi to be friends with ‘Fat Chicks’ (yup, that’s the exact phrase he uses) because they are loyal to be friends with. (This is beyond me, I can’t even name what it is, Fat-shaming and sexism together? You decide!)

Fidaa And The Right Way Of Feminism Forward

Now coming back to Fidaa, this movie actually shows what women are capable of. How women should be equally treated just like men, and not everyone has to sit at home and take care of the family. Most importantly, how they are free to think, what to do and what to wear.

If you ask me, Fidaa to Telugu Film Industry, what Lipstick Under my Burkha‘ is to Bollywood this year.

If all these reasons aren’t convincing you enough to understand, then allow me to explain further. Throughout the runtime of the film,  Bhanumathi (Sai Pallavi) keeps asking her family repeatedly that, ‘Why should a woman leave their house after the marriage, and move to where ever the husband’s family is leaving? Why can’t it be something different or opposite?’ To which the poor people, have no answer. However, the man (Varun Tej) what does he decide to do? He stays back!! Breaking all stereotypes, and leaving behind his male ego, like never seen before in any movie.

If this isn’t game-changing, path-breaking and empowering, then what is? Fidaa is the reality check that we have some much to progress in our lives.

P.S – This is not just about Arjun Reddy, Sexism, Fat-Shaming, and many shameful things are seen in many movies nowadays (not just Telugu). But the reason I chose Arjun Reddy to explain is, because of the immense craze it has in the Social Media.

P.P.S – Also, I don’t have any personal vendetta towards the movie, Arjun Reddy. As I have already said above earlier, this movie is a path breaker in some ways, (But, only in some ways).

1,073 thoughts on “[VoxSpace Life] Here’s Why Fidaa, And Not Arjun Reddy Is The True Game Changer In Telugu Film Industry”