The Bollywood Hero : How The “Angry Young Man” Typically Reduced The Actresses To Puppets 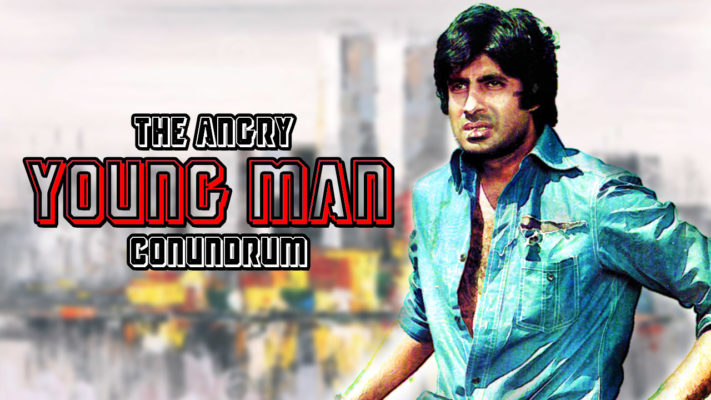 Dialogues such as these take us back to the late 70’s and 80’s when stories about the “angry young man” floated on the silver screen. The movies were all about glitz and glamour – fighting, love, deprivation and everything else in between. Looking back at them now, I think masala was indeed the perfect word to define them in a nutshell.

When I was a kid, Doordarshan and DD2 were the only channels present. Slowly, Zee Cinema came into vicinity with cable network making its way into the urban middle-class household. I remember how every week, I and my sister would wait eagerly for the weekends – when three to four films would be screened on Friday, Saturday and Sunday. The films screened over the weekends would mostly be old films, those from the 70s and 80s. Needless to say, I became addicted to the “dhishoom-dhishoom” flicks. Boy, were they not exciting!

However, when I look back, there comes only one thought in my mind – where were the actresses? Of course, there would be one or even two “heroines” in most films, but when it came to role distribution or even substantial roles in the films, the actresses would fall behind by a thousand miles.

The Idea Of Angry Young Man In Bollywood

The idea of Angry Young Man was derived from the 1950-60s British genre of the same name, which is also remembered as the British New Wave. Although this genre was first to hit the theatres, it gained pretty nice momentum and acceptance on the silver screen as well. It was the first time that working-class heroes were portrayed on screen in leftist themes.

As it seems from the entire set-up, the entire theme was, kind of, “hero” centric- the hero, who later in Bollywood donned upon himself a larger-than-life garb – the perfect lover, the immaculate saviour, the best friend of the helpless and the devil to the evil.

Still, Where Were The Actresses?

The very phrase that we are stressing on here – the Angry Young Man – does not leave much scope for the women. In fact, it did not matter if there was no woman in the film. History or revolutions do not really focus on women much, except, of course, the feminist movement which revolves around the women per se.

However, when we talk about the Bollywood films belonging to the same genre, women actresses were not occasional in them. They were, in fact, present in every film. You would see them romancing the hero, standing with them during times when he would be down with grief or filled with the rage of vengeance, and, of course, often getting abducted by the villain and going on the verge of getting raped, till the hero would come to save her. In short, it was a mechanical – though filled with boiling emotions – process where the heroine would substantially be there to magnify the magnanimity of the hero.

Well, there were few films which were “heroine-centric”, like “Khoon Bhari Maang”, but somehow I feel they just played on the name of the actress and did nothing to be revolutionary as such.

Although the largest part of movies that were made during the 70’s and 80’s reduced actresses to mere objects and tropes, there were consistently films being made which re-affirmed the credibility to women of being flesh-and-body characters and inhabitants of the same dystopia as the men had been. Films of Gulzar and Shyam Benegal bear testimony to that fact. In Gulzar’s films, women played as strong a character as the men – they had a voice of their own and were conditioned by the situation as the men. Unlike the other flicks, they did not dream in fancy clothes, dancing around the trees. Their dreams and aspirations were real – as real as the men.

Then there was Shyam Benegal, whose most films revolved around the downtrodden, that is, the women. In his film, she was the common lady who we see every day struggling in the bus. Also, she was the head-strong matriarch of a brothel. His women were diverse and coloured according to the shades of those days.

While Shyam Benegal’s genre can be regarded as art films or parallel movies – he was the flag-bearer of Indian New Wave – Gulzar’s films somehow came between the parallel films and the commercial films. Yet, they have segregated apart from the mainstream cinema as mainstream films of those days strictly had to adhere to certain unwritten guidelines.

The films of Basu Chatterjee and Hrishikesh Mukherjee also deserve to be named here – directors who steered away, clear from the dichotomy of black and white characters, as well as the trope to use women as heart-stealers. Although the trend of “angry young man” was famous till the late 80s, the notion of men being an all purveyor – larger-than-life characters – prevails even today. Even recent films, like Baaghi 2, reinforce the idea of a weak-hearted woman and a strong-willed man, the one who is an eclectic amalgamation of Tarzan and Sherlock Holmes. He is invincible and emerges victorious in any given situation. Even the camera movement and angles focus on him in a way that he is turned into a demi-god for the audience (or “spectators”, if you may say so!).

Such is the situation of women in Bollywood films. Of course, recently there have been numerous films where women play the lead, but this habit of using women as playthings or emotional fools is present latently even to this day. And we have not really considered the non-angry young man movies of the 90’s till present, where once again the actor is the HERO.

Will the grandiose of Bollywood always adhere to this unwritten rule of conditioning itself to fit into the patriarchal loop? Perhaps patriarchy sells much more than equality does – a sad but true story.